Cusco treasures: Koricancha, the Golden Temple of the Sun

Discover Koricancha, a crowning glory that holds a wealth of pre-Inca, Inca and colonial history in Cusco.
by Steff LazoHerencia 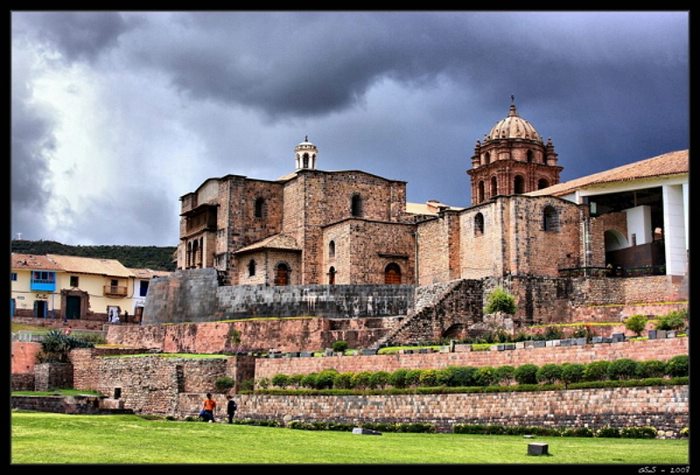 View of Koricancha from the Wiracocha Garden. Photo by PhotoGSuS/Panoramio website

Cusco Treasures: Koricancha, the Golden Temple of the Sun

Cusco was once the thriving capital of the Tahuantinsuyo, better known as The Inca Empire. Today, the illustrious city is the Andean country’s top destination for its proximity to a large percentage of Peru’s most popular tourism destinations, including Machu Picchu and the Sacred Valley of the Incas. The city is a crowning glory that holds a wealth of pre-Inca, Inca and colonial history to be explored. Like many of the ancient capitals of the world, Cusco‘s grandeur was built over centuries and under multiple reigns of Incas (kings). At the center of the growing metropolis is Koricancha, the Golden Temple of the Sun. Today, this former temple can be found at the intersection of modern-day Calle Santo Domingo and Avenida del Sol in Cusco.

Beliefs and The Temple of the Sun

The connection between earth and heavenly bodies influenced local beliefs and determined locations of important constructions. As a matter of fact, all major landmarks in the area, including Machu Picchu, were structured with celestial synchronicity. The Quechua were talented astronomers who built temples and observatories throughout the region. Koricancha, is a Huaca (sacred place) built to honor the sun God, Inti. The huaca is a prime example of dual purpose architecture. Not only did it honor Inti, but it’s alignment with stellar and planetary motion allows for a precise stream of golden sunlight to collect through its windows every solstice for Intiraymi– the Andean New Year. Temples were built with sacred places such as caves, mountains, and rivers being taken into consideration. Such places are connected by transcendental lines (seqes) that were believed to connect the sacred energies of the earth of which Koricancha is thought to be the focus.

The Quechua, people of Tahuantinsuyo, believed nature and natural forces to be powerful deities. The beliefs and rituals that accompany the naturalistic Andean worldview are still held within the general population, although some customs have been incorporated into Catholicism to protect them from Christianization of the region. Due to the imposition of Christianity, the majority of Peruvians now identify as Catholic, nonetheless the resilience of a powerful belief system that reveres the spectacular natural landscape still thrives. 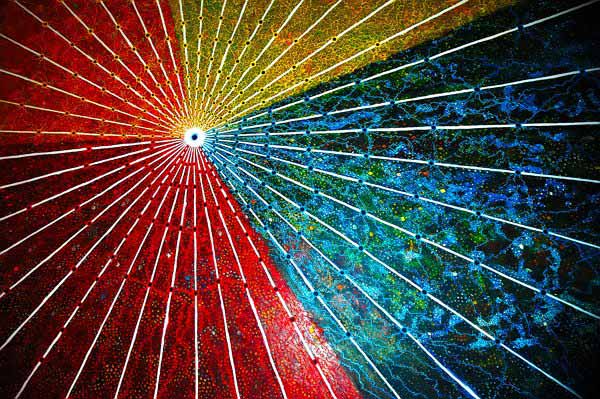 Koricancha’s construction is believed to have been initiated by the first Inca, Manco Capac circa 1200AD. Manco Capac and his wife Mama Ocllo are said to have come from Lake Titicaca and travelled the Andean landscape together until they reached what they thought to be the center of the world, Q’osco, which means bellybutton in Quechua. They were also in charge of finding the right geographic location for what would be the most important temple of the kingdom of Cusco, which would would later expand to become the Inca Empire. Koricancha is located on a natural hill that is nestled between two rivers, Shapy-Huatanay and Tullumayo. Places like this are sacred because they convene near Apus (Gods) such as rivers, rocks and mountains. The temple was initially known as Inticancha, circa 1400 AD. but the name was changed to Koricancha ( kori meaning gold and kancha meaning enclosure) after the restructuring and gold-laden embellishment given to it by the Sapa (Ruling) Inca.

After Koricancha was embellished, the temple walls were plated with 700 sheets of gold. According to chroniclers of the time, each sheet depicted one of the exalted Gods of Koricancha: Inti (sun), Killa (moon), Chaska (stars) and Illapa (thunder/lighting/rainbow). The temple’s garden was for Wiracocha (creator of the universe) and was adorned with silver and gold life-size statues of alpacas, corn and people. Unfortunately, the magnificent wealth of Koricancha was ransacked by the Spanish during the conquest. The hostile takeover of the Inca Empire came with the capture of the last Sapa Inca, Atahualpa. The gold of Koricancha was given as part of the ransom in exchange for his freedom, but it was in vain since Atahualpa was executed by the Spanish in 1533 after they received the gold. Atahualpa’s death marks the beginning of the collapse of the Inca Empire. Inca Tupac Amaru led unsuccessful uprisings and was also captured and brutally executed by the Spanish. The empire never regained its power. 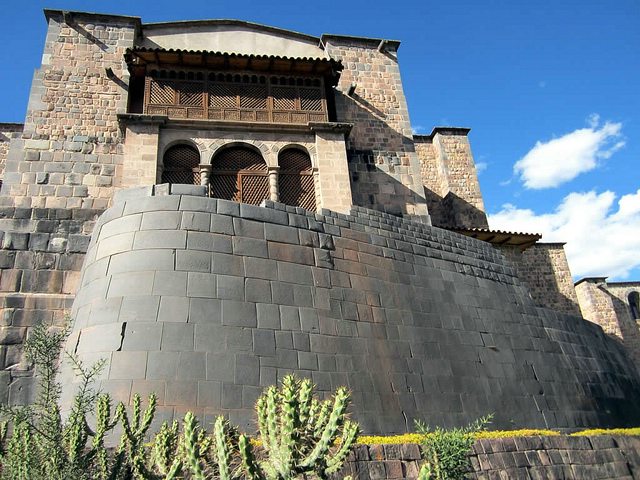 Reconstruction of exterior of Koricancha.
Photo by D. Stanley/Flickr

According to C.H. Cuadra from the Akita Prefectural University of Japan, “In [Koricancha’s] type of construction, the adjacent stones are carefully shaped and fit snugly against each other without the use of mortar. The Koricancha temple is the most representative structure of the finest stone masonry of the Incas.” The stones used to build Koricancha were quarried 20-30 km from the city of Cusco in the towns of Waqoto and Rumicolca. The construction stones used to build Koricancha include plutonic diorite rocks and extrusive Andean sites as well as softer calcareous rocks. Like with all Inca architecture, Koricancha’s stone structure is brilliantly designed to withstand the motions of the earth’s vibrations.

Koricancha is built with many construction mechanisms used by the Incas, such as the vertical inclination of walls, trapezoidal shape of the structures, irregular shapes and rounded edges. Increased breadth on the bottom coupled with ~ 3-5 degree inclination gives the walls remarkable stability that has withstood centuries of earthquakes, which are common to the area. The staggered and mortar free assemblage of the stones also makes them seismically resistant in strong earthquakes because the stones are able to wiggle in place, thereby releasing the seismic stresses, settle back into position and then lock after earthquakes. These combined methods make the structures basically earthquake proof.

It is not just the precisely worked stone that is impressive but also the keen understanding of stability in structure that amazes a spectrum of artists, architects and seismic engineers. 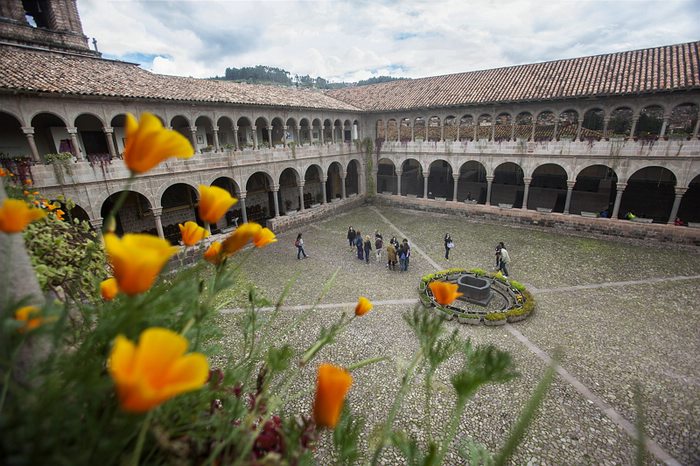 Koricancha depicts the meeting of two worlds: Western culture towering over the foundations of the indigenous dynasties and cultures. After the Spanish invasion, Koricancha was given to Juan Pizarro, the younger brother of the Spanish conquistador Francisco Pizarro . Upon his death in July of 1536, it was willed to the Dominicans, who still have ownership of the structure today. In the 16th century, orders to build the Priory were placed. By 1534 the Santo Domingo monastery was founded. Much of Koricancha was taken apart for construction material which were then used to build the church of Santo Domingo. Over time, the Spanish construction has failed and collapsed several times, it has been rebuilt to its original structure, but the Inca wall structures have remained unchanged and unaffected by the seismic activity of the Young Andes Mountain Range.

However, the architecture of the St. Dominic Priory should not be disregarded, it is an impressive example of Spanish architecture complete with Baroque style decorative carvings and vaulted ceilings. Spanish arcades surround the internal garden of the cloisters where a pre-Hispanic single stone fountain still stands. Moreover, the wooden door boasts Mudéjar (Moorish) style carvings-Santo Domingo is the only place in Cusco where this style can be observed.

Plan a tour of Koricancha

Experience all of Cusco’s highlights on a tour of Peru. Call Latin America For Less to start planning your trip! 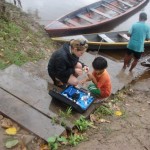 Steff is a traveler at heart and the wildness of South America never seizes to captivate her exploratory spirit. While she spent a majority of her childhood in the United States as a free-range “Austinite”, she was born in Peru and feels a deep connection to this continent. She has been fortunate to experience the remarkable landscapes and diversity of Chile, Venezuela, Brazil and Peru. 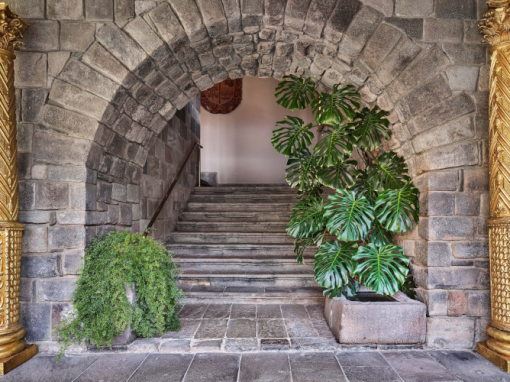 END_OF_DOCUMENT_TOKEN_TO_BE_REPLACED

How to Get to Cusco: Planes, Trains, and Buses

Our Peru expertise helps you sort through the pros and cons of each transport option to Cusco.