Larcomar is not just a center for shopping, but also for culture and entertainment.
by Anabel Mota 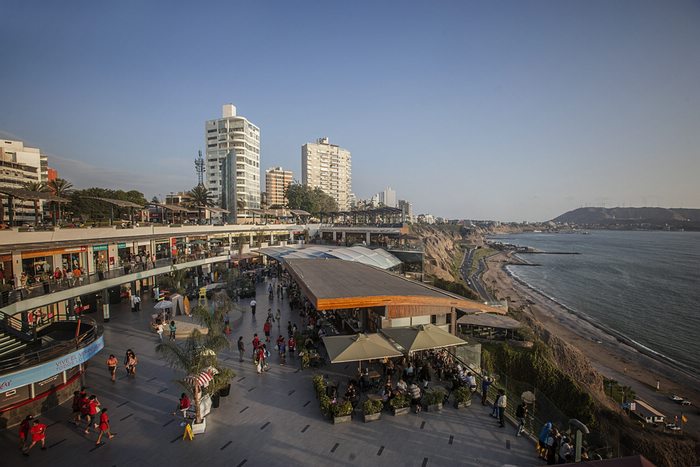 Lima’s best asset is its location on the Pacific Ocean. It’s a fact that’s easy to forget in the middle of the traffic, noise, and sprawl of the city center. Larcomar – a dining, shopping, and entertainment complex perched above the sea – retakes the ocean front in Lima and serves as an architectural emblem of a city that has found new energy and vigor in the 21st century. For this reason, a stop at Larcomar is an excellent addition to any Lima tour.

If you stumble upon Larcomar by accident, you are likely to be astounded at the sight before you. From street-level, nothing signals that there is a 45,000-square foot complex built into the sandstone cliffs that run along Lima’s border with the Pacific. The steep vertical cliffs with drops of up to 80 meters form a natural border between the city and the ocean. The beaches below are pebble-filled and not suited for swimming. But the combination of green parks, brown-red cliffs, and white-capped blue sea makes for magnificent views: This is what sets Larcomar apart from other shopping centers in Lima (and around the world), which tend to be exclusively indoor affairs. 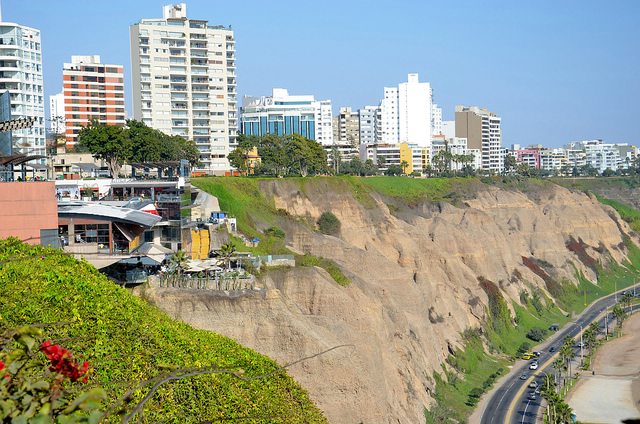 Larcomar occupies a section of the Malecón, a 6-mile promenade that extends down Lima’s coast, offering green spaces for joggers, cyclists, and other fitness enthusiasts. It connects to the Miraflores hub of Parque Kennedy via Avenida Jose Larco. The shopping center’s name derives from these geographic features – “Larco” from the name of the avenue and “mar” meaning sea. The JW Marriot Lima sits on the same intersection between Av. Larco and the Malecón, across the road from the shopping center.

Larcomar was constructed on the site of a public park, the old Parque Salazar. Architects and engineers demolished the park and excavated into the cliff to create usable square footage. The result is an indoor-outdoor structure that melds into the cliff and that also extends out from it. A new green space with fountains was built to replace the old park and it covers an underground parking structure with a capacity for 700 cars. 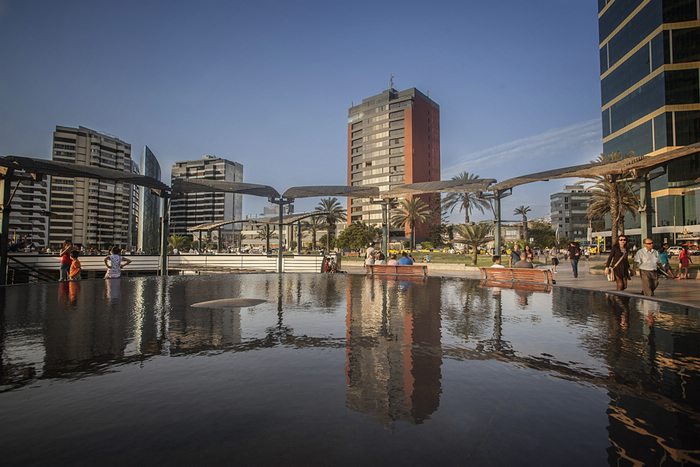 Approaching from street level, stairs and escalators descend to lower levels, which project out over the sea. Curved lines, polished wood surfaces, and canvas awnings over shop doors are suggestive allusions to the hull, masts, and sails of a sea-going vessel. Standing on the top platforms lined with steel railings and looking west over the ocean gives the impression of being on a cruise ship. Other design elements also take into account the history of Miraflores; the community was first established as a “balneario,” a resort where wealthy Limeños built their “ranchos,” or summer houses, to enjoy the sun. Larcomar’s specially fabricated wood flooring and balustrades replicate those found in old Miraflores homes.

Since its opening in 1998, Larcomar has become a center not just for shopping, but also for culture and entertainment. It is frequented by the many tourists who cluster in Miraflores, where they are catered to by the immense offering of traveler services and amenities. But Lima locals also flock here and the pride they take in their gorgeous coastline is almost palpable.


What to do at Larcomar

Larcomar is the perfect place to whittle away some time, especially if you have a few hours to kill before a transfer to the Lima airport. Aside from shopping or dining, a visit to Larcomar provides access to the Malecón and surrounding park spaces, including the famous Parque de Amor. Lima’s oceanfront is ideal for appreciating the spectacle of summer sunsets that light up the skies in shades of yellow, orange, red, and purple. 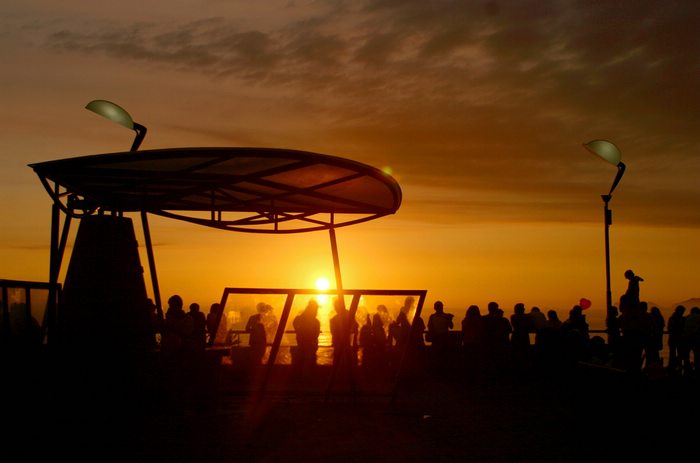 Those are some lovely yellow hues.
Photo by Ana Castañeda Cano/Latin America for Less

Inside the mall, the most popular entertainment options are the 24-lane bowling alley and the 12-theater UKV Multicines, which shows the latest movie premiers. From the food court to sit-down restaurants, Larcomar has plenty of choice for hungry stomachs. Sample the local fast food a Bembo’s burgers, Pardo rotisserie chicken, or La Lucha sandwich. For lighter fare, visit the coffee shops Havanna and La Bonbonniere. Or seek out a taste of home (if the U.S. is home) at KFC, Starbucks, Tony Roma’s, Chili’s, or TGI Friday’s; the last two are good for happy hour.

Clothing, shoes, and accessories shops favor global brands such as Guess, Converse, and Hush Puppies, but they tend to retail at higher process than back home. Other services include hair salons, the supermarket Wong, travel agencies for last minute tour bookings and information, and the office of PeruRail for trips to Machu Picchu or between Puno and Cusco. 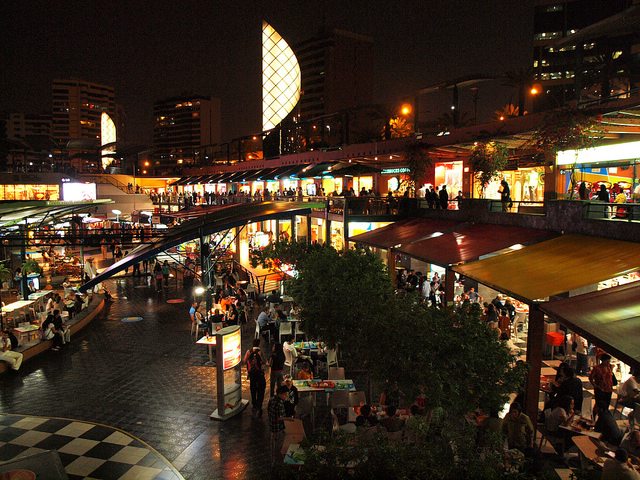 When the sun goes down, Larcomar keeps going. The nightclubs Aura and Gotica attract wealthy Limeños and party-seeking travelers.

Check out our Guide to Parque Kennedy, a beautiful and lively park in Miraflores just a short walk from the Larcomar Shopping Center.

For more information about planning your own tour of Lima, call and talk with an expert travel advisor at Latin America for Less today!