Travel to Machu Picchu, Masterpiece of the Inca Empire

A UNESCO World Heritage Site, the Historic Sanctuary of Machu Picchu rests on a rocky saddle at 7,972ft (2,430 m)s above sea level between two peaks. 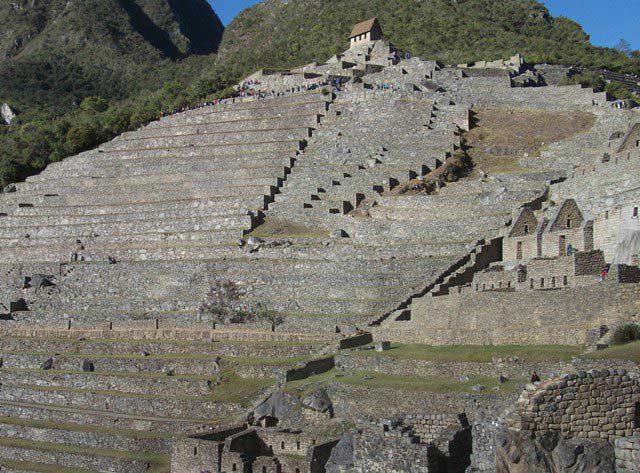 The Guardian's Hut is visible in the upper middle. Dozens of terraces and thousands of stone steps connect the different sectors of Machu Picchu.

Today, we begin a new blog series featuring the historic man-made wonders of South America. We’ll span the length and width of the continent, profiling marvels that showcase the genius, artistry, and ambitions of South America’s great civilizations and modern cities. What better place to start than with one of our absolute favorites. Travel to Machu Picchu with us. 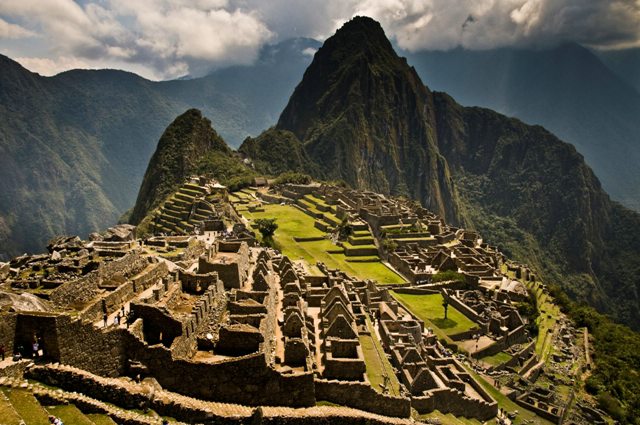 On a clear day, the sun casts its light on the magnifient ruins of world wonder Machu Picchu. If you look closely the outline of Huayna Picchu (“Young Mountain”) looks like an Inca in profile. The high peak is the nose and the smaller peak to the left is the chin.

Declared a UNESCO World Heritage Site in 1983, the Historic Sanctuary of Machu Picchu rests on a rocky saddle at 7,972 feet or 2,430 meters above sea level between two peaks, Huayna Picchu (pictured above) and the higher Montana Machu Picchu. From its perch, the citadel seems to emerge from the rocky slopes of the mountain and indeed the integration of Machu Picchu’s man made aspects with the natural surroundings is part and parcel of the site’s enchanting beauty.

Construction of Machu Picchu began sometime around 1450, a period during which the Incas expanded territorially, growing from a small kingdom to a vast empire and securing dominion over much of the Andes. Under the direction of Inca overseers, laborers conscripted from the conquered regions built the city from the materials available to them, namely the granite stones of the mountain itself. They constructed platforms for the different sectors, they raised retaining walls and agricultural terraces with built-in drainage systems, and they carved, sculpted, and dragged monumental stone pieces into place to create a place of jaw-dropping beauty.

Imagine arriving to the gates of Machu Picchu 500 years ago. After a difficult pilgrimage of multiple days, you would pass through Inti Punku (the Sun Gate) and encounter the sight of the citadel spread before you. The buildings washed in color, roofs covered in thatched straw, gardens adorned with flowers, spring water gurgling through fountains and canals, and passageways busy with milling residents. None of this survived subsequent centuries of abandonment, but the gray stone ruins of Machu Picchu, set amidst a sea of mountains and embellished with clouds of rising mists, remain simply impressive.

The Principal Temple is visible in the foreground while the Intihuatana (Sun Stone) sits atop the pyramid of terraces.

In the 1530s, as conquering Spaniards made their triumphant entry into the imperial Inca city of Cusco, the most elite inhabitants of Machu Picchu fled from their sacred citadel. The precise date of their departure is not known and neither is their destination; nor do we know if and where they took the city’s treasures. Peruvian scholars suggest that the site was never completely abandoned. Historical records show that Spanish landowners continued to demand tribute from Quechua natives that worked the agricultural terraces as tenant farmers during the colonial period. However, the urban sector of Machu Picchu, including palaces and temples and residences, was soon reclaimed by the jungle and became enveloped in layers of tropical green vegetation.

In the 20th century, Hiram Bingham’s explorations and his publications in National Geographic magazine ignited worldwide interest in the mysterious Machu Picchu. Archaeological work began, extensive restoration projects followed, and the sanctuary quickly grew to become a huge destination for Peru travel. Today, visitors can arrive to Machu Picchu by hiking the Inca Trail, the ancient footpath that linked Cusco to the sacred city. Another option is to catch the train to Machu Picchu, a route which runs from Cusco and Ollantaytambo along the Urubamba River valley until reaching the town of Aguas Calientes (also called Machu Picchu Pueblo) at the base of the ruins. 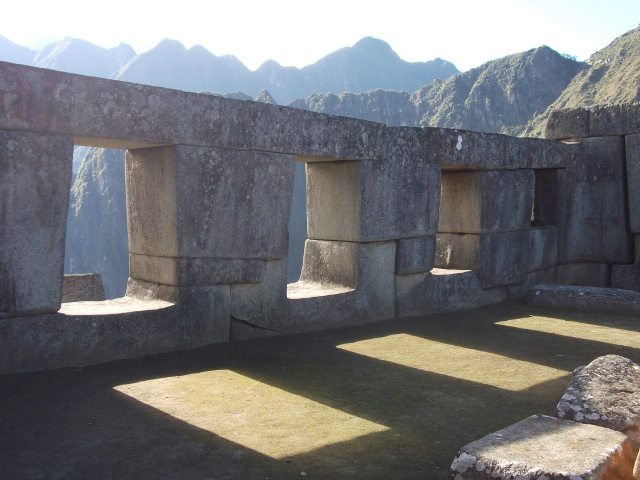 The amazing Temple of Three Windows in Machu Picchu, with huge stones that fit together like puzzle pieces, is a great example of precision Inca architecture.

No matter the mode of arrival, Machu Picchu astounds and delights the thousands of visitors who make the journey. The city is laid out in an east-west direction, maximizing exposure to the light of the sun during the day. Some of the buildings also have windows and other features that align precisely with the solstices, the equinoxes, and the movements of constellations. Like other Inca constructions, most of the buildings were of polished stones, fitted together so perfectly that not even a piece of paper can be slotted in between.

The most important buildings of Machu Picchu are in what is called the religious sector. The Intihuatana (Sun Stone, or “hitching post of the sun”) sits atop a pyramid of terraces built from a small rocky outcrop and is believed to have been an astronomical clock or calendar. The main pillar marks the position of the sun throughout the year. The Temple of the Sun includes a rounded tower-like structure with windows, one of which aligns directly with the morning sun during the winter solstice in June. Beneath the temple is a cave with finely-worked stone walls and niches that some researchers say held the mummy of the great Inca Pachacutec.

The amazing features of Machu Picchu are nearly endless. Travelers can see the main parts of the citadel within a few hours, but to really do justice to the site, at least a full day at Machu Picchu is recommended. Learn more about Machu Picchu here.

Our team of expert travel advisors at Peru For Less can help you organize an amazing trip to Machu Picchu. Contact us to start planning your dream vacation to Peru. 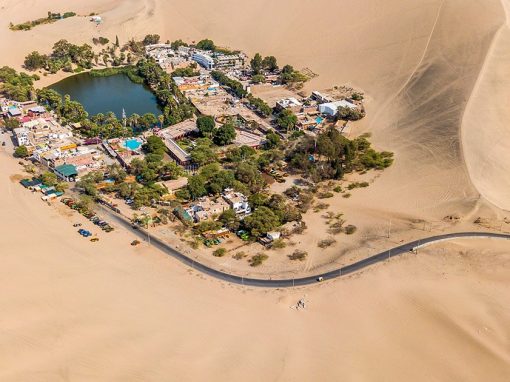 Read this guide to learn about the fascinating desert oasis of Huacachina, including what to do, best time to visit, where to eat, how to get there and more.

END_OF_DOCUMENT_TOKEN_TO_BE_REPLACED 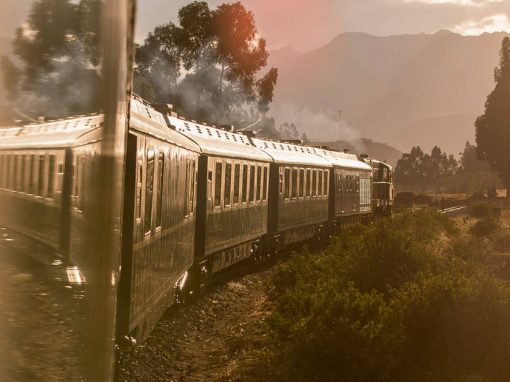 Train to Machu Picchu: Everything You Need to Know

All the latest info about Machu Picchu train tickets, how to get from Cusco to Machu Picchu, luggage policies, route options, planning tips, and more.