Everything you should know about Manu National Park, including history, guides, and information on the diverse activities and animals you can find there. 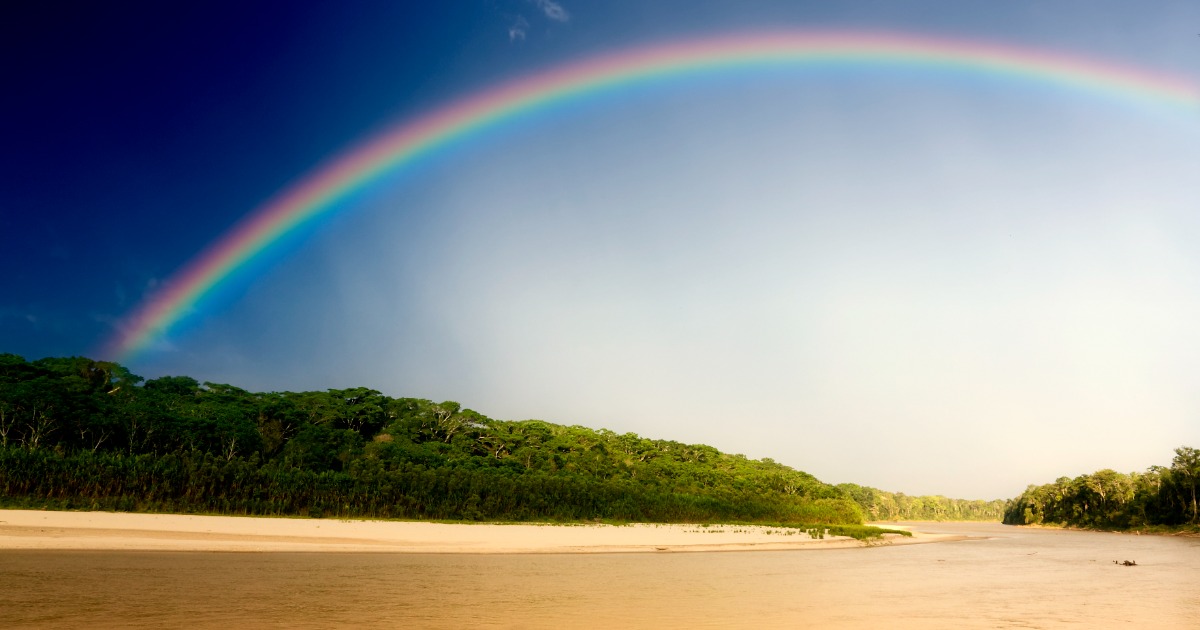 A rainbow stretches across the sandy banks of the Amazon River in Manu National Park. Photograph: Latin America for Less

Accessible from Cusco and Puerto Maldonado, Manu National Park is the place to go for immersion in nature’s wonders. The park’s remote location and protected status mean you’ll experience a gorgeously pristine corner of the Peruvian Amazon. Read our guide for essential facts and travel tips for your trip to Manu.

If you’re interested in traveling to this incredible area of Peru don’t hesitate to contact us. We will happily help you plan your itinerary, making sure that the trip of your dreams happens. We can coordinate everything from flights, bus transfers, and hotels all with our expert guides.

With elevations spanning between 150 m and 4,200 m of elevation, Manu National Park encompasses an astounding variety of climates and a bewildering number of plant and animal species. So many, in fact, that researchers continue to find undiscovered flora and fauna even after decades of intensive research. Accessible from Cusco and from Puerto Maldonado, Manu and its handful of lodges provide a chance to experience a wonderland of habitats from cloud forest to lowland rainforest in a setting unlike any other in Peru or the world.

Scattered archaeological sites testify to a long history of human habitation in this remote area of the Peruvian Amazon.The Pusharo Petroglyphs are stone carvings representing faces and abstract figures. The site is located on the banks of the Palotoa River, a tributary of the Madre de Dios River in Manu National Park. The origin and significance of the glyphs is still unknown, but are believed to be between 1,000 and 2,000 years old. A Dominican friar first described them in 1921. The 2015 issue of the Peruvian 1 Sol coin has an image of the carvings on one side.

The Legend of Paititi originated after the Spanish Conquest of Peru. According to 16th century chronicles, a pre-Columbian kingdom called Paititi based in the jungle was able to resist the advances of the Inca imperial army. A second version says that after the capture of the last Inca king by Spanish soldiers the remnants of the Inca elite retreated to the rainforest along with their sacred objects crafted in gold and silver. Throughout the colonial period, various expeditions set out in search for the lost city of gold. Usually, they found only disaster.
Spanish settlers founded the city of Paucartambo to control trade in coca leaves, gold, and textiles between the Andes and the Amazon, adapting an old Inca route that served the same purpose. Today, Paucartambo is a necessary stop between Cusco and the Manu cloud forest.

Today, Manu National Park is one of the most impressive and biodiverse regions globally. Here are its most recent recognitions and notable dates.
1968 – Manu area designated national forest.
1973 – National park status formalized after pressure from Peruvian preservationists and international supporters.
1987 – Manu Biosphere Reserve recognized by UNESCO as natural heritage site. 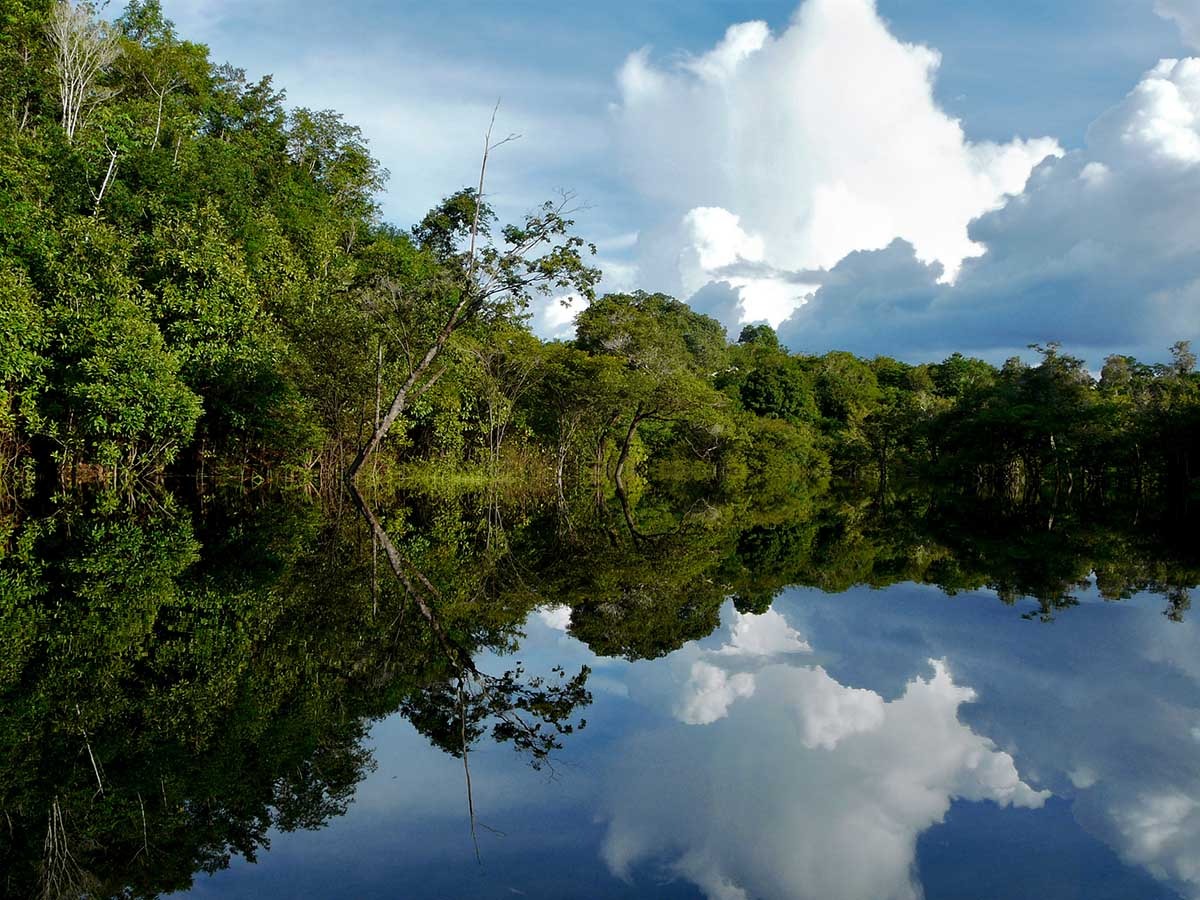 Manu National Park is one of the most pristine natural habitats. Here you’ll experience the freshest air and beautiful landscapes. Photograph by Latin America for Less.

Located north of Cusco in the southwestern corner of the Amazon, the Manu rainforest includes a total area is 18,811 km² which breaks down as follows:

This territory spans elevations between 4,200 meters and 150 meters above sea level including high Andean puna, mountain cloud forests, and lowland rainforest. The result is an extremely broad range of ecologies that have fostered the evolution of highly diverse species.
Vast and geographically isolated, the park has no roads and requires some effort to access. The only way to get around is by boat. The Manu River and the Madre de Dios River form the southern and eastern borders of the reserve. 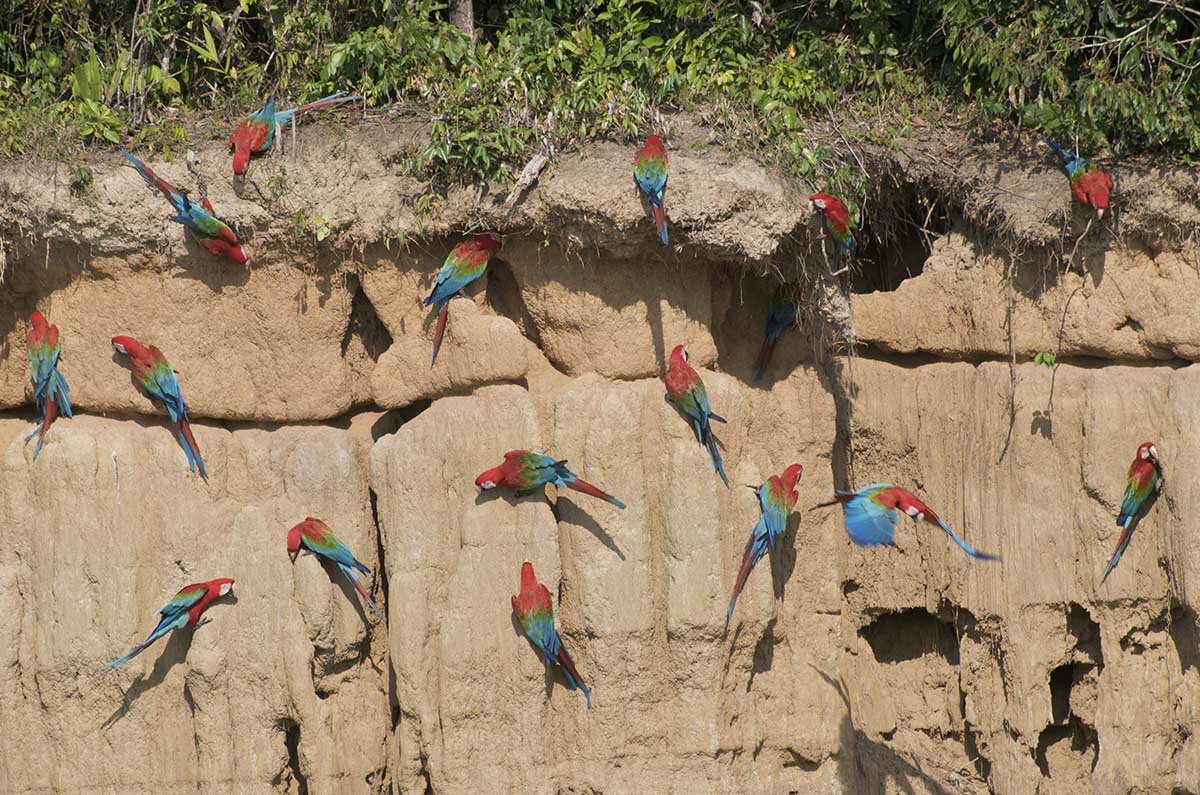 The Manu Biosphere Reserve is divided into 3 zones:

An additional 60km from Paucartambo, Mirador Tres Cruces is a lookout point over the meeting place of the Andes and the Amazon. On clear days, it’s possible to see the peak of the massif Ausangate all the way down into the depths on the jungle basin. In the dry season from May to August, a natural phenomenon causes the illusion of three rising suns that flicker into cross shapes – hence, “tres cruces.” As the sun rises, clouds begin to evaporate, the moisture interacts with the sunlight to form a prism. During the Virgen del Carmen festival, shared vans transport tourists to the lookout point in time to see the gradual lightening of the sky and the sun rising above a thick mat of clouds around 6 am.

From Paucartambo, continuing past Acjanaco Pass (12,630 ft / 3,850 m) and the turnoff to Tres Cruces, the road begins its ascent into the gorgeous Kosñipata Valley dropping thousands of meters in elevation. This the place to go for river rafting and mountain biking tours through Peru’s gorgeous cloud forest mountains. It’s also the route to rainforest lodges in Manu including Paradise Lodge, Gallito de las Rocas Lodge, and Erika Lodge. The Quechua word kosñipata means “place of smoke” in reference to the heavy mists that shroud the eastern flanks of the Andes as they plummet to meet the Amazon.

Located at the meeting point of the Madre de Dios and the Manu river, the village of Boca Manu has a small airport that receives charter airplanes. It’s also a stop on the route over land and by boat from Puerto Maldonado. The checkpoint to go further into the park is in nearby Limonal.

Manu is an ideal destination for rainforest ecotourism in Peru. Nature in its most pristine form is the main attraction and a strict conservation plan helps to keep it that way. Go to Manu and you’ll discover a variety of microclimates home to an incredible diversity of flora and fauna.

Wildlife Spotting – Monkeys, bugs, and reptiles abound in the rainforest. If you’re lucky, you might also see the otorongo (jaguar), black panther, tapir, collared peccary, deer, and capybara. Forest trails and cochas (secluded lagoons) are the best place to spot wildlife while learning about life in the rainforest, medicinal plants and food.
Bird watching – Many travelers come to Manu specifically for the birds. And with one of the largest bird lists in the world, Manu certainly merits such a specific interest. Airborne residents include the harpy eagle, jabiru, roseate spoonbill, and the cock of the rock.
Clay licks – Special attraction in Manu where travelers can see macaws, parrots, and parakeets flock by the thousands for morning meals of clay.
Canopy towers – See the rainforest from the perspective of creatures who live at canopy level. Scattered tree towers in Manu range from 30-40 meters (100-130 feet) tall. Standing on the platform reveals a alternate dimension of rainforest activity that can’t be seen from the forest floor. 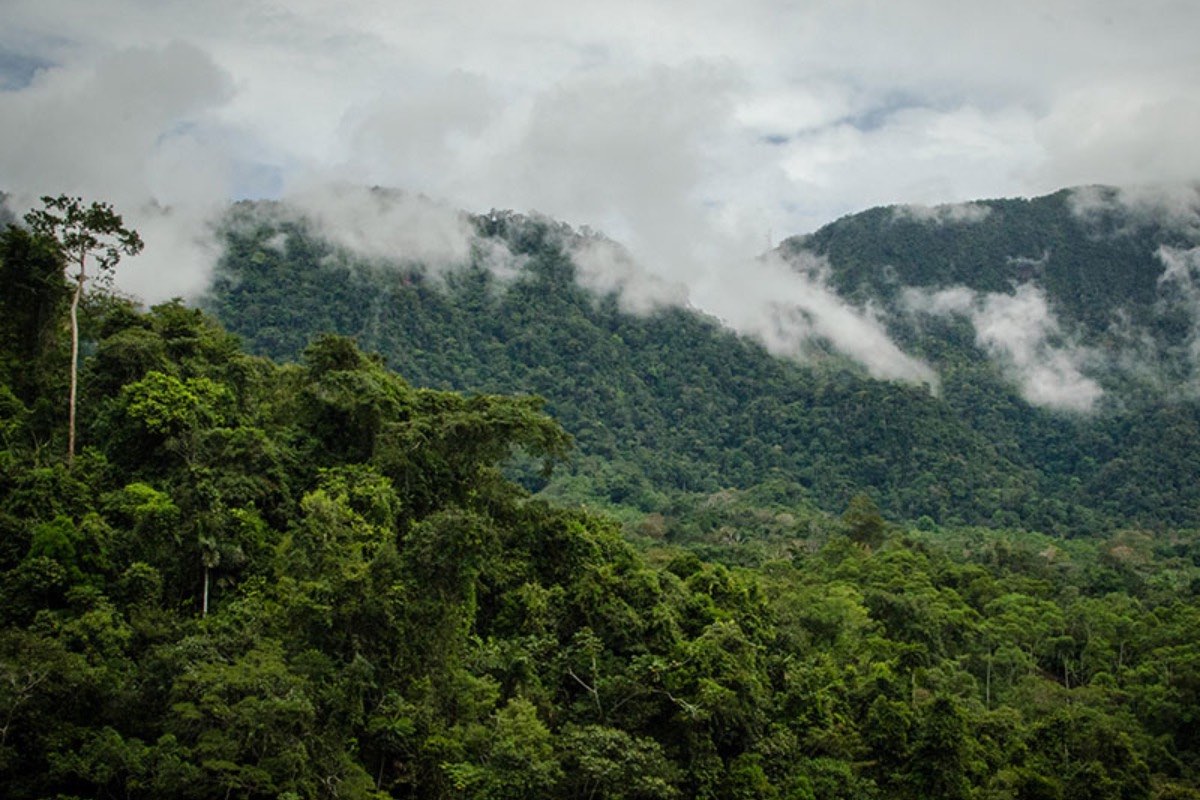 Like any rainforest, weather can be unpredictable and change at a moments notice. Photo by Latin America for Less

Manu’s extreme topography creates multiple microclimates. Lower elevation areas are hotter with average temperatures ranging from 35 C during the day to 25 C at night. In Manu’s higher elevation areas, temperatures are generally cooler. Expect warm temperatures during the day and cool nights.
Temperatures can drop after heavy rains, reaching as low as 10 C (50 F). Another weather phenomenon, called “surazo” or “friaje,” occurs when polar winds from Patagonia sweep up the mountains and into the rainforest. Temperatures can be as low as 8 C (46 F).
Keep in mind that this is the rainforest and showers are possible at any time of year. Officially, the rainy season is from December to March. May to August is comparatively drier, though also much warmer.
What to pack: bring light, quick-drying clothes. Preferably synthetic fabrics, as the humidity prevents cotton from fully drying out.

How to Get to Manu

There are three routes to get to Manu:
From Cusco: by car to Paucartambo, through the Kosnipata Valley to the Manu River
From Puerto Maldonado: by car to Santa Rosa Village 2.5 hours, cross Inambari River to Puerto Carlos, to Boca Colorado 45 minutes, up Madre de Dios river.
To Boca Manu: charter flights land at a small airstrip, river transport to lodge.
Entry Fees
Sector Acjanaco: S/. 10
Manu River lower basin: S/. 150
*prices subject to change

What can I expect at an Amazon lodge in Manu?
Many lodges and tour operators in Manu abide by ecotourism standards, emphasizing leaving a low carbon footprint. Visitors can have basic but comfortable lodging. Mosquito nets are provided. The architecture will resemble that of local communities and uses locally available materials. Food is simple but good. Cooks make use of locally grown foods, including fruits and vegetables. Lodge kitchens can accommodate vegetarian and other specific diets when notified in advance. All that said, it’s generally true that you get what you pay for. A higher tour package price might get you “extras” such as a hot shower and electricity. Be sure to check with the tour operator to see what is and is not included.

Which is better – Manu or Tambopata or Iquitos?
It depends on how much time you have and your specific interests. For short itineraries, Tambopata probably has the most accessible wildlife viewing. Iquitos offers the unique chance to cruise the Amazon River. Manu is well-suited for travelers with more time who don’t mind basic accommodation in exchange for a unique experience of spectacular birdlife, clay licks, and unique habitats.

END_OF_DOCUMENT_TOKEN_TO_BE_REPLACED 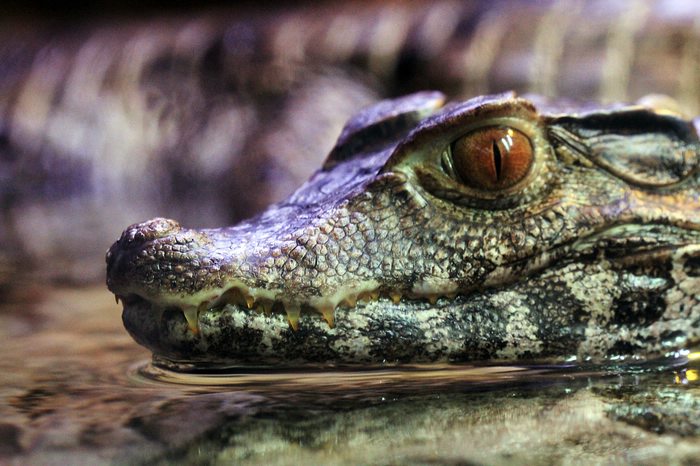 Manu National Park in Peru is one of the most diverse places on earth, with 257 reptile and amphibian species living in the área.