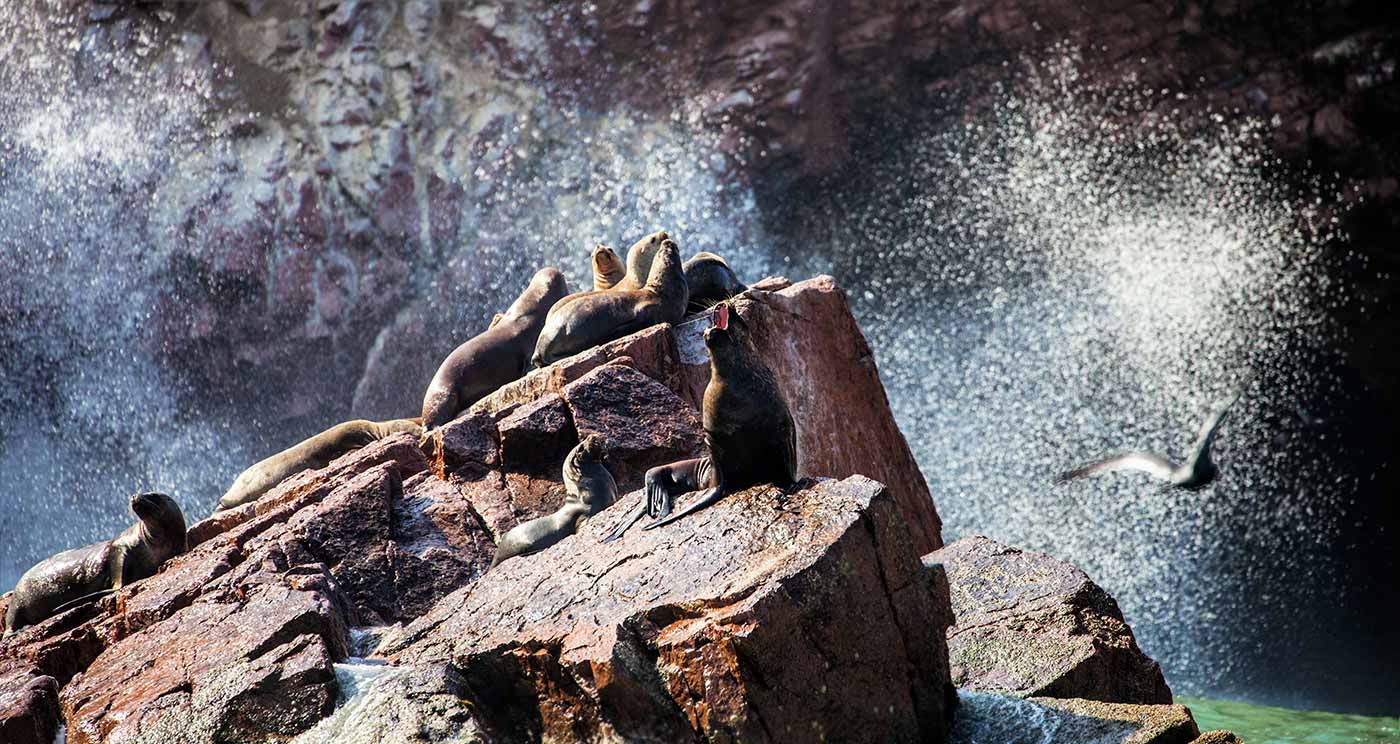 From Lima, travel down the coast to glimpse a remarkable concentration of marine fauna in one of the world’s most extraordinary island groups. The roar of sea lions and the squawks of birds join the crashing waves in a cacophonous symphony, while the sheer number of marine creatures that inhabit the rocky island formations will make you rub your eyes in wonder. Browse our comprehensive guide below for essential facts and travel tips to help you plan a Ballestas Islands tour.

Lovers of marine wildlife flock to the Ballestas Islands to see colonies of seals and seabirds inhabiting the rocky islands of Paracas Bay. The islands are part of the Paracas National Reserve, which is Peru’s only marine reserve. Wind and water have eroded the rocks into beautiful arches, caves, and crevices which are an attraction in themselves. Accessible via the town of Paracas, the Ballestas Islands can be combined into a neat 2-day trip to/from Lima that includes a Nazca Lines flight and an overnight at a resort overlooking the scenic Paracas Bay.

The Ballestas are known as the “Poor Man’s Galapagos” because of the relatively low cost of a tour combined with the abundant and unique wildlife on display. Two-hour tours departs from the port in Paracas. From afar, you’ll see the isles vibrating with motion. And as the boat gets closer, you’ll finally be able to distinguish the swarm of seals and birds that blanket each island. It’s an unforgettable sight. In the first part of the tour heading out from the bay, boats pass by the enigmatic Candelabro geoglyph etched into a steep seaside hill of the Paracas peninsula.

Tours depart at 8:00 am and at 10:00/10:30 am. Later in the day, the winds increase and make navigation a bit trickier. Tours may be canceled due to foul weather.

Many travelers go to Ballestas just to see the birds, many of which are endemic to Peru and the Pacific Coast. It’s quite a treat to see them nest peacefully on steep rock surfaces. Breeding season varies by species.

Basking in the sunlight, swimming for fish, and occasionally performing for tour boats, chocolate-colored South American sea lions (scientific name Otaria flavescens; in Spanish, lobo marino or leon marino) are among the Ballestas’ most charismatic residents. Males are huge, with giant, maned heads reminiscent of lions, and can weigh up to 350 kg (770 lb). Females are about half the size and weight.

Calving and breeding season in Paracas is from January to March for sea lions and from October to December for fur seals. During these month, cute pups abound and territorial adult males belch out roars to protect their harems and fend off potential rivals.

Since time immemorial, sea birds have deposited their guano on the Ballestas Islands and similar isles off the coast of Peru. And since the time of the Incas, this guano has been used a fertilizer. From the mid 1800s to early 1900s, guano became an valuableglobal commodity and Peru’s islands were extensively mined. Peru stuffed its coffers, but the delicate ecosystem that sustained the seabird population suffered heavy damage.

In 1909, the Compañía Administradora del Guano was created to restore the guano bird population, protect the natural environment, and manage extraction. By the mid 1900s, the wide availability of synthetic fertilizers diminished the importance of guano.

It is said that guano used to cover the isles in layers of 20 to 70 meters deep (some say up to 150 meters). Today, the guano is much thinner. Mining is limited to three months as part of protective measures enacted to avoid further disruption of the seabird ecosystem.

In 1975, the Paracas National Reserve was established to protect remains of indigenous Paracas culture on the mainland and the marine ecosystem of the Paracas Bay.

Today, the Ballestas Islands are a principal destination for tourism on the Peruvian coast south of Lima. In the summer months, weekend vacationers from the capital city travel here to enjoy the sunny weather and seafood specialties.

The Ballestas Islands are actually not within the Paracas National Reserve. Rather they are protected under a separate reserve, the Reserva Nacional Sistema de Islas, Islotes y Puntas Guaneras, which include guano islands and their ecosystems all along the coast of Peru from Tacna to Piura. Special legislation permits guano mining on a restricted basis.

The Humboldt Current creates ideal conditions for the animal inhabitants of Ballestas and the Paracas Peninsula. Cold, nutrient-rich waters sustain a complex ecosystem ranging from microscopic algae to humpback whales. A large population of fish provides a consistent food supply for the Ballestas’ star residents, the sea lions and seabirds.

Travelers short on time can tick off two major Peru attractions in a 2-day trip from Lima.

Is it possible to visit Ballestas Islands and Paracas Peninsula in one day and be back in Lima by the evening?

Yes. Two-hour Ballestas boat tours depart at 8 am and 10 am (a handful depart at 10:30 am). The peninsula is just south of El Chaco (Paracas port), so with a private tour, you can visit the key sites in a few hours and still have time to return to El Chaco or Pisco for the return trip to Lima. Alternatively, you can rent a bike and explore the peninsula on your own, but be advised that high winds can make biking difficult. Booking one night in Paracas either at the start or end of the tour is a good way to make the day less hectic.

Are there tours to the Ballestas Islands in the afternoon?

No. The last tour depart at 10 am or 10:30 am. Later in the afternoon, the seas are usually too rough. For the same reason, boat tours may be canceled at the last minute if sailing conditions are poor.