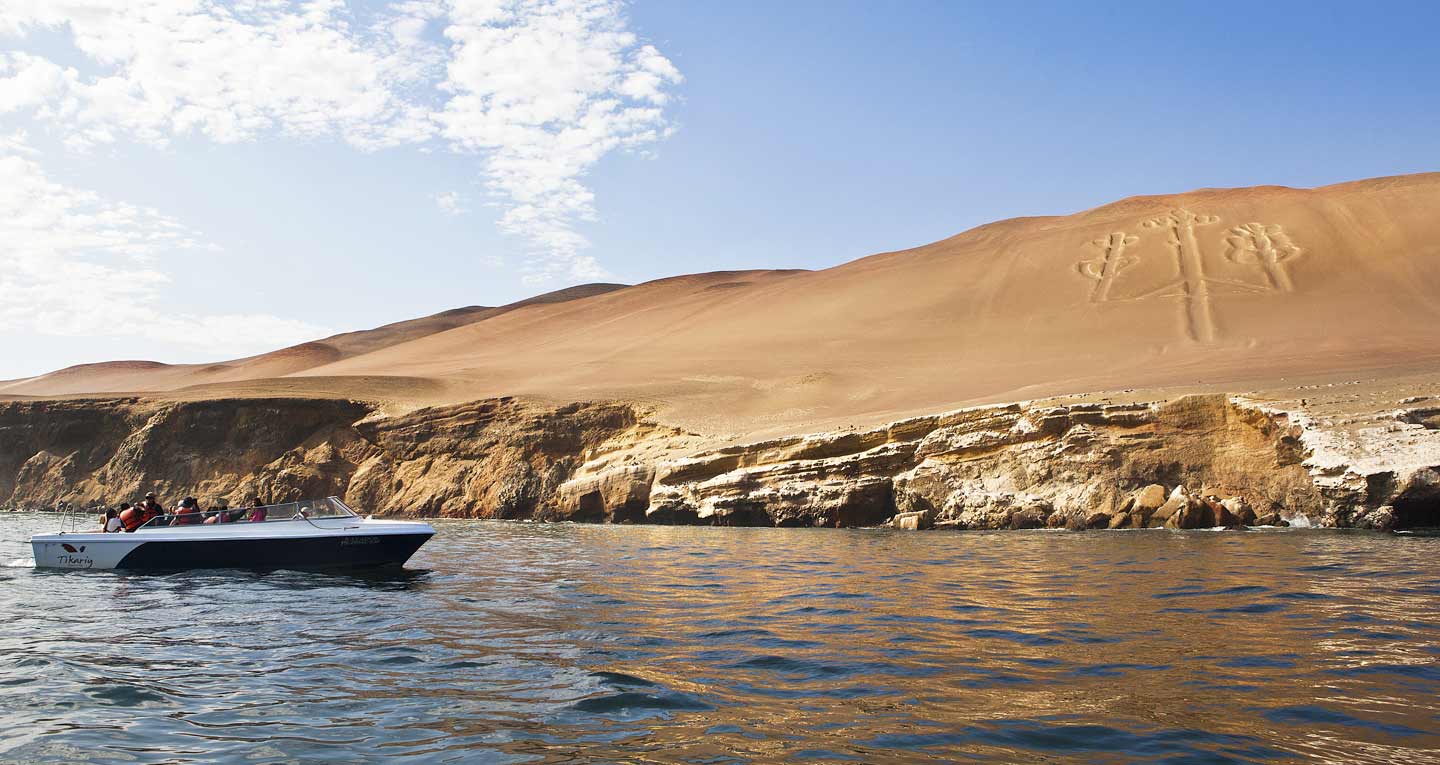 No stretch of coast in Peru rivals the Paracas Peninsula for its rugged beauty, astonishing biological diversity, and archaeological sites nestled amid desert hills with views to the sea.

Most people only take time to see the Ballestas Islands, but those who stay longer to explore the peninsula are rewarded with exceptionally scenic beaches and opportunities for adventure activities from kayaking to dune buggy rides to sand boarding.

Outside the northern limits of the reserve, El Chaco (main town) provides accommodations in every class from hostels and basic guesthouses to luxury resorts.

900 BC to 200 AD – The Paracas Peninsula is named after the Paracas culture. The people were fisherman and farmers who cultivated beans, maize, and red peppers. Their primary were around present-day Pisco, further north of the Paracas Natural Reserve, but they used Cerro Colorado as a burial site for centuries.

From excavations at the Paracas Necropolis, we know that the Paracas were exceptionally skilled craftsman. The subterranean tombs contain obsidian knives, pottery, shell and bone necklaces, gold ornaments, and finely woven textiles. The dry climate and the lack of light in the underground burial chambers ensured that these artifacts were preserved.

1820 AD – On September 8, the “Freedom Expedition” headed by the Argentine General Jose de San Martin landed on Paracas Bay with more 4,000 soldiers. San Martin is said to have drawn up ideas for the Peruvian flag during his short stay, and that the pink flamingo, a resident of the Paracas peninsula, inspired the flag’s red-and-white colors. The liberation force later marched to Lima to confront the Spanish imperial forces and eventually win independence for Peru.

1925 – A team of archaeologists led by Julio C. Tello begin excavating the Paracas Cavernas. This communal burial site dates to 300-200 BC.

1975 – The Peruvian government creates the Paracas National Reserve. To date, it’s the only marine reserve in Peru.

2007 – A massive 8.0 magnitude earthquake rattles the central coast of Peru. Most of Pisco city was destroyed and more than 400 people died, including 148 who were inside the Pisco cathedral when it collapsed.

Dirt roads criss cross the Paracas Peninsula, leading to small beaches and lookout points over the sea. Marked walking trails make it possible to explore limited areas on foot. However, first timers on the trails can easily get lost. Prior research, a good topographic map, and/or the company of a guide are advised. Fun alternatives to walking include ATV and bicycle tours, and all sorts of wind and water sports such as windsurfing, hang gliding, kayaking, and more.

Named after Peru’s most famed archaeologist, the Julio C. Tello Site Museum presents textiles, ceramics and informational displays that explain the evolution of the Paracas culture and is sophisticated artistic production. From the museum building, venture along the footpath which leads to a mirador overlooking the Paracas Bay. You can spot flamingos here all year round, except from January to March when they migrate to the Andean mountains.

It’s worth mentioning that the best examples of Paracas artifacts and mummy bundles have been moved to museums in the capital city, including the Larco Museum in Pueblo Libre and the Museo Nacional de Arqueología, Antropología e Historia del Perú in the Historic Center of Lima.

Two kilometers past the reserve’s northern entrance, the visitor center is adjacent to the Tello Museum and has exhibits on conservation and ecology (signage is in Spanish only).

Cerro Colorado was the burial grounds of the Paracas culture for hundreds of years beginning as early as 400 BC. In excavations of the site, archaeologist Julio C. Tello determined two separate burial systems. The Paracas Caverns were used beginning in 400 BC and consist of underground tombs accessible through long shafts. Each tomb held 30 to 40 mummified bodies. By 200 AD, burial practices evolved. The Paracas Necropolis was a series of shallower graves for individual bodies. Neighboring groups also used the peninsula to entomb their dead. Collectively, the grave sites of the Paracas Peninsula have provided archaeologists with a invaluable cache of textile art, ceramics, and human remains – including skulls with evidence of cranial surgery and deformation – that lend insight into Peru’s earliest civilizations.

The many beaches of the Paracas peninsula make for excellent off-the-beaten path exploration.

The nutrient-rich waters of Paracas National Reserve sustain an impressive number and variety of residents on land and sea, including whales, orcas, dolphins, hammerhead sharks, Humboldt penguins, and leatherback and hawksbill turtles. Though extremely arid, the Paracas Peninsula shelters its fair share of flora and fauna, including 74 species of plants, 216 species of birds, 16 types of mammals, and 10 species of reptiles.

The giant candlestick-shaped glyph is located on the northern tip of the peninsula. Experts have not been able to determine if this drawing is related to the Nazca Lines. Seeing the Candelabra is only really possible as part of a Ballestas boat tour. Access on land is restricted in order to protect the glyph.

The Ballestas Islands are actually part of a second reserve (separate from Paracas National Reserve) called the Reserva Nacional de las Islas, Islotes y Punta Guaneras. It is possible to arrange a guided tour to Ballestas and the Paracas Peninsula in the same day. For more information about close-up encounters with sea lions and seabirds, have a look at our Ballestas Islands page.

Located 20 km south of El Chaco, the enormous salt flat at Otuma is a source of salt and other minerals. Rock salt is shipped to the U.S. and Canada where it is used for salting icy roads in winter.

The Paracas National Reserve covers 3,350 square kilometres, 65% of which is sea and 35% land and islands. This area has the highest concentration of marine birds anywhere in the world. Guano is a major export.

On the mainland, the reserve covers all of Paracas Peninsula and extends further south about 80 kilometers. The northern edge of the peninsula curves up to forms the Paracas Bay. The resort town El Chaco is located on the bay just above the northern limit of the reserve and is surrounded by dry hills and the Ica Desert.

Like the rest of the country’s coastline, the land is dry with little vegetation. The arid environment of southern Peru along the Pacific shore played a key role in preserving pre-Columbian organic material buried in the sand for hundreds or even thousands of years.

Paracas has a desert climate with very little rainfall. The average temperature is about 24°C (75°F).

The name “Paracas” is a Quechua word meaning rain of sand, in reference to the strong winds that whip up the desert sand. Afternoon winds are especially strong in August. Wind speeds average between 25 to 60 km/h (15 to 37 mi/h).

Winter from July and August can bring slightly cooler evening temperatures. It’s always a good idea to wear a jacket or layers for Ballestas Islands tour.

The Paracas National Reserve is a year round destination. High season is during the summer months from December to March when the days are hot and the sky is clear. Many Peruvians visit here on their summer holiday.

The first step is to get to El Chaco, the main bayside town in Paracas. The southern reaches of the reserve are accessible via Ica.

By bus: The company Peru Hop provides door-to-door service from Lima to Paracas to Ica/Huacachina Oasis and is a great choice for backpackers on the tourist trail through southern Peru.

By road: El Chaco is located approximately 260 km (160 mi) south of Lima along the Panamericana Sur. The highway is well-paved. From Ica, Playa Carhuas and the beautiful Bahia Independencia is 60 km (37 miles) away.

Is it possible to visit Ballestas Islands and Paracas Peninsula in one day and be back in Lima by the evening?

Yes. Ballestas boat tours are usually in the morning and last 2-3 hours. The peninsula is just next door, so with a private driver, you can visit the key sites in a few hours and still have time to return to El Chaco or Pisco for the return trip to Lima.

If there’s too much wind/bad weather in Paracas what else is there to do?

Head to the pisco distilleries in Ica or Pisco or try a dune buggy and sandboard tour in Huacachina Oasis.