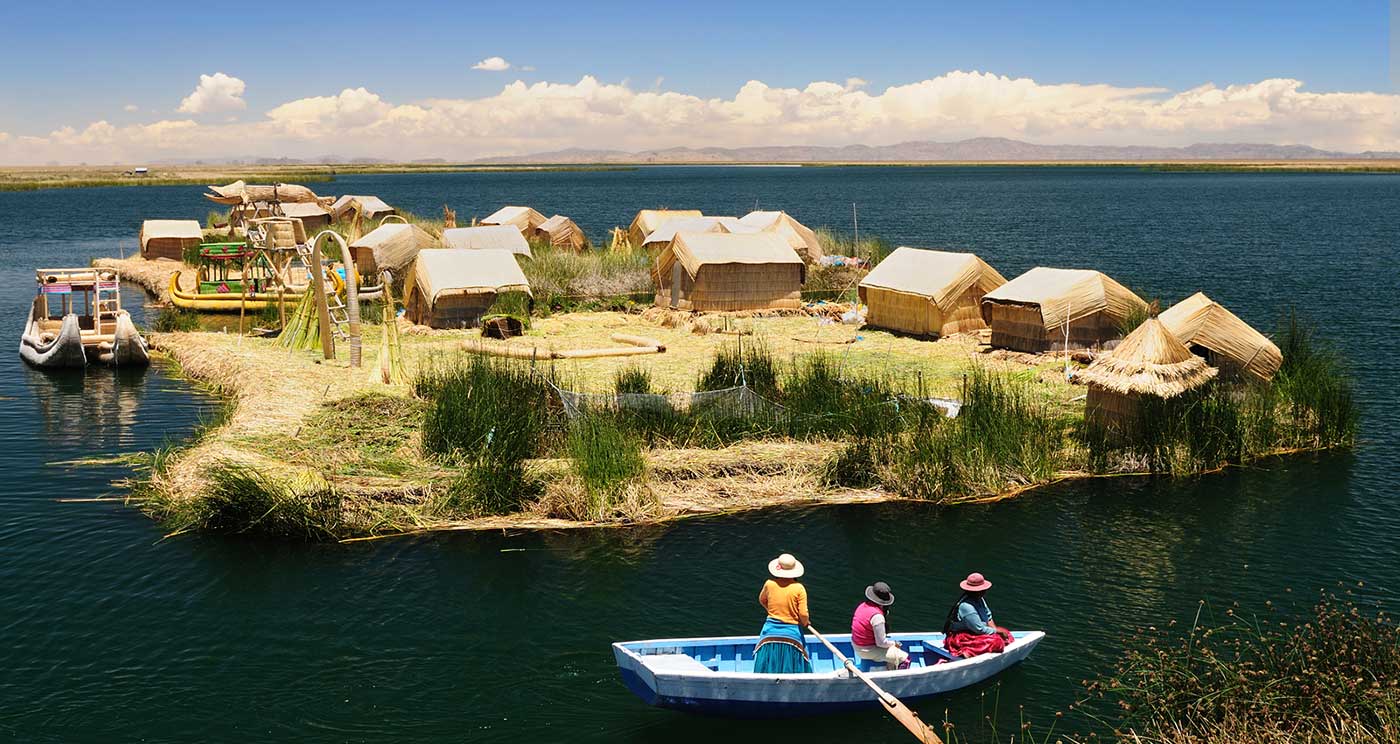 Archaeological and cultural gems surround the city of Puno. Ancient Aymara-speaking civilizations inhabited the lands around Lake Titicaca long before the Incas and left behind evidence of their existence. From Puno, embark on a guided tour or independent exploration to experience the natural beauty and unique history of southern Peru. Browse our guide below.

Spend some extra time in Puno and visit surrounding archaeological sites that date to more than 2,000 years ago and bear witness to the tremendous skill of ancient societies that settled around the sacred lake Titicaca. The highlight, of course, is sailing over the vast blue waters to islands where indigenous communities keep their traditions intact.

The archaeological remains surrounding Puno city provide important insight about the region’s history. Different cultures have thrived here over the centuries. Building techniques were improved and spiritual beliefs transferred, sometimes altered, from one generation to the next. An early population settled in the northern basin of Lake Titicaca at Pukara (now an archaeological complex) between 500 BC to 200 AD. Later, the Aymara-speaking people called Colla are thought to have built the chullpas, or tall burial towers, at Sillustani and Cutimbo.

Lake Titicaca was sacred to the Inca Empire. The Incas ruled over present-day Peru and parts of Bolivia, Chile, Argentina, and Ecuador from the 14th century until the to the mid-15th century when the arrival of the Spanish. Colonialism brought Catholicism to the Puno and Lake Titicaca region, which mingled with local beliefs to create some truly unique religious syncretism celebrations.

The living culture of the Puno and Lake Titicaca region pulls from a rich palette of tradition. Today Puno city is the folklore capital of Peru. Annual festivities, such as the Candelaria, are a colorful explosion of Andean and Catholic beliefs. On remote islands of Lake Titicaca not far from Puno, centuries-old weaving practices, dress, and dances are apart of daily life for small local communities which they now share with curious travelers.

Puno city rests on the shores of Lake Titicaca in southern Peru, not far from Bolivia. The 80 mi (130 km) drive along the lake shores from Puno to the border crossing at Yunguyo takes about 2 hours. Historic sites dotting the Altiplano plateau surrounding city are accessible on a half or full-day tour. From the port of Puno, travelers depart on boat tours to explore the cultural varieties of communities inhabiting the lake’s remote islands.

Distances from city of Puno:

The Altiplano, or high plain, covers southern Peru and much of western Bolivia. Lake Titicaca occupies the northernmost basin of the region and lies at about 12,000 ft (3,650 m) above sea level. Few trees survive at such a high altitude, so grass and shrubs dominate this wind-sheared landscape. For more than three thousand years, civilizations in the Puno and Lake Titicaca region have grown corn, potato, and other high altitude crops.

Sillustani is the main archaeological attraction in the Puno and Lake Titicaca region. This pre-Inca cemetery consists of several circular and square burial towers, called chullpas, built by the Pukara Culture. The chullpas were the final resting place for nobles whose mummies put in the tombs alongside gold artifact and other earthly riches to await rebirth. The Incas inherited the cemetery and refined the building techniques of the stone structures.

The archaeological site at Cutimbo features tall burial towers called chullpas that are similar to those at Sillustani. The site was used by several different cultures, first the Colla and Lupaca followed by the Incas. A trail from the main road leads up the circular and square-shaped Cutimbo chullpas perched on a table-topped mountain. Of particular interest are the monkey, snake, and puma shapes etched into the stones bricks of some ancient tombs.

The archaeological complex at Pukara, a small town northwest of Puno city, is where the first regional population in the northern Lake Titicaca basin thrived between 500 BC – 200 AD. Weaving tools and shards of decorated pottery are among many artifacts discovered at Pukara that offer researchers important insight into the origins of Andean civilizations in the highlands.

On a day trip from Puno, you can visit the archaeological site and the Pukara Lithic Museum. The town of Pukara is also famous for its pottery. “Toritos de Pucara”, ceramic bulls traditionally placed on the roofs of Andean houses, are excellent souvenirs and sold in town.

How to visit: Day tour from Puno city. Some bus tours between Cusco and Puno also stop in Pukara.

The Temple of Fertility is the main attraction of Chucuito, a small town on the banks of Lake Titicaca just south of Puno city. Within the walled-off complex are rows of more than 80 eyebrow-raising stone statues of male genitalia. Rumor has it that women trying to get pregnant once frequented the temple to perform fertility-boosting rituals. While the stone wall at the temple is distinctly Inca, the originality of the statues and their placement at the site is up for debate.

Temple of Fertility lines the main plaza in Chucuito. Guides are available for hire. Also located on the main plaza, is Templo Santo Domingo is the oldest church in the altiplano region and boasts a wooden altar adorned with gold features. Nuestra Señora de la Asunción is another one of the 16th century churches in Chucuito.

Puno city is the jumping off point from which you can explore the islands of Lake Titicaca steeped with ancient cultural traditions. Talk with your travel advisor for more details about special tours and overnight homestay options.

Uros, a group of some 60 man-made reed islands, is a top-pick highlight of Lake Titicaca. Each artificial island is inhabited by three to five families. On a tour, you can meet the resident Aymara families and learn about their ancient torta reed and weaving practices passed down through the generations since pre-Inca times.

The friendly residents of this island preserve age-old traditions and extravagant dress. Taquile is known for its male weavers, enchanting dances and courtship practices. There are also Inca-era ruins to explore and countless trails up to stunning hilltop lookout points.

The Sistine Chapel of the Andes

In the Andean village of Andahuaylillas, along the route between Cusco and Puno, the whitewash church with a brightly painted facade of San Pedro Apóstol lines the main plaza. Inside, every inch is covered with elaborate Andean baroque decor from which the church earned its inscription as “The Sistine Chapel of the Andes”. An ornate gold-leaf altar and the stunning Mudéjar-style mural decorating its tall ceiling are among the sanctuary’s eye-popping features.

San Pedro Apóstol was built by Jesuit missionaries during the 16th century over an ancient Inca ceremonial site. The church showcases a mixture of European and local aesthetic that exists today as one of the best examples of Andean baroque design. In 2009, a restoration project was initiated to prevent the loss of its decorative elements; including original paintings, murals, chapels, choir, and the main facade.

How to get there: The church of San Pedro Apóstol is actually closer to Cusco than Puno City. But travelers can take a special bus tour in transit between these popular Andean destinations that stops at San Pedro Church and other attractions along the way.

Using Puno city as a convenient base, it is easy to discover the surrounding historical sites and enchanting islands of Lake Titicaca. Tours depart from Puno city and generally include round trip transport. Of course, your travel advisor will arrange an overnight stay that best fits your customized itinerary and own preferences.

Check out all of our recommended hotels in the Puno and Lake Titicaca region.

You’ll work up an appetite after a long day of exploration. The best selection of sit-down and casual eateries are in Puno city. Mojsar Restaurant (Jr. Lima 635, 2nd floor) serves a variety of Peruvian and Italian-infused dishes and is conveniently located on the city’s main plaza. For a quick and inexpensive meal, many restaurants offer a popular set menu that comes with a small entry (soup or salad), a main course, dessert, and beverage.

Bring some Peruvian Soles with you on a guided tour. Vendors selling chips, crackers, and bottled beverages are common at almost every tourist site. And even the smallest towns have a few local restaurants. And Another option is to plan ahead and bring your own water and snacks. Your travel advisor will let you know if lunch is part of your half or full-day tour.

The altiplano region of Puno and Lake Titicaca has a semi-arid climate. Windy conditions really cause temperatures to drop. Snowfall is exceptionally unlikely. Daily temperatures don’t vary much throughout the year and average between 60-65ºF (15-18ºC) during the day. Night temperatures get very cold.

Dry Season is from April to November. Weather conditions are usually sunny and pleasant. In June and July, nighttime temperatures generally hover above freezing.

Rainy Season is from December to March.  During these months, clear mornings are typical with rainfall in the afternoons. January and February see the heaviest rainfall.

What should I pack for a day tour?

Many attractions near Puno city are easily visited on a full or half-day tour.  Your travel advisor will outline the specifics of your itinerary as logistics vary from site to site. Here’s a general packing checklist for items to bring in your daypack:

What tours are offered to the attractions near Puno city?

From Puno city, visiting the islands of Lake Titicaca is very popular tour option. Group and private tours can be arranged. Guided tours to lesser known archaeological sites, such as the ancient burial towers at Sillustani, are also available. Some lesser-known attractions near Puno city are accessible via bus or taxi ride and can be explored independently. Our team specialized in customized travel itineraries and will let you know your options about visiting a specific site.

How much should I tip my tour guide?

Tipping is a great way to show your appreciation for a job well done, and warmly accepted by your guide. Below are suggested tipping ranges to give your guide for a half or full day tour.

*The ranges represent a total amount that varies with the number of people in your tour group and can be divided amongst everyone. Of course, the amount of tip you leave is at your own discretion.

The gift of electricity for a Peruvian family in Lake Titicaca

Jill and Eddie Neuwelt, a couple from Portland, Oregon, took a dream vacation to Peru in December 2012. During their trip they stayed with the Yanarico family on Amantani Island in Lake Titicaca and were impressed by the family’s hospitality despite their humble and often difficult lives.

The mystical waters of Lake Titicaca

Lake Titicaca is just one of Peru’s  natural wonders. The lake is the highest navigable body of water in the world and has its western shores in and its eastern shores in Bolivia. Its deep blue depths, situated at over 12,000 feet above sea level.

Using the city of Puno as a convenient base, it’s easy to discover some of the enchanting islands that make the lake such a unique place.