Money in Peru: All About Peruvian Currency

Learn everything you need to know about Peru's currency, the nuevo sol, and read some useful tips for using money in Peru, including where to withdraw or exchange money. 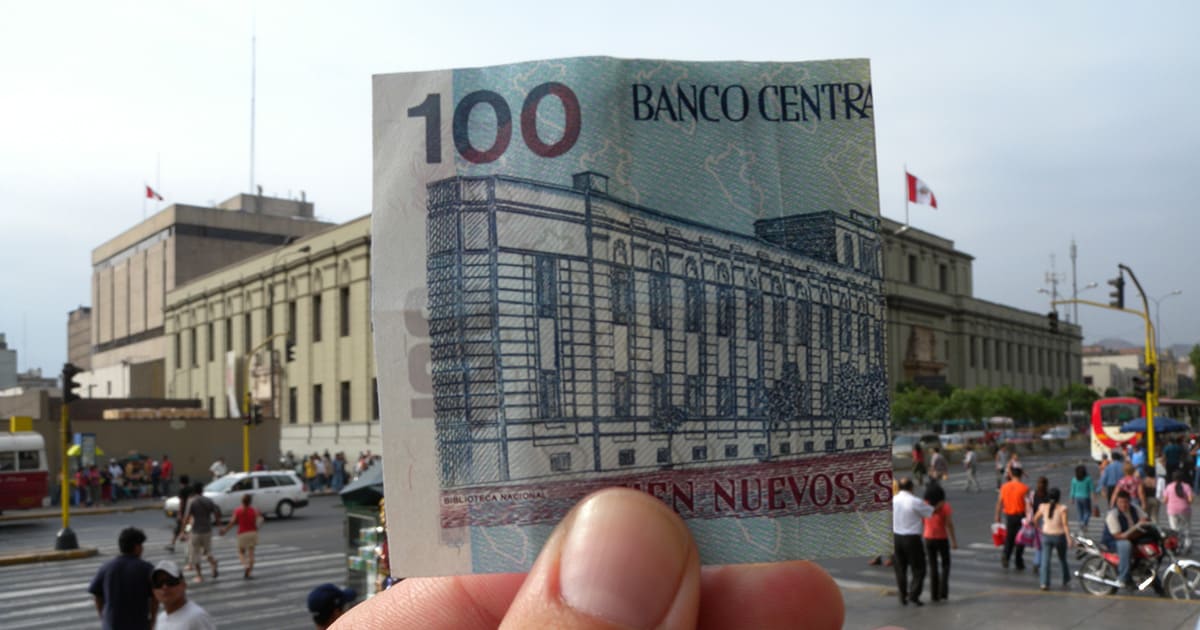 Getting ready for that dream vacation to Peru? One thing that is often overlooked is the daily act of using money in a foreign country. How much do things cost? What is the exchange rate? Where do I take out money? Can I use my credit card? The daily economic life in Peru is a little different than that of any other country, and it is important to be prepared before you step foot on the plane. Here are some helpful tips and advice to consider when traveling in Peru. 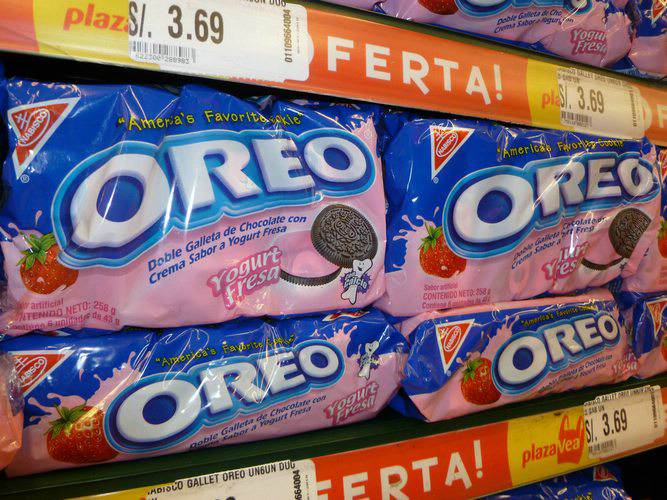 Many large grocery stores carry some of the same products as American grocery stores. The only difference is that they are in Spanish.
Photo by David Berkowitz/Flickr

One important thing to know about Peru is that typically food and services are significantly less expensive. A delicious and filling three course menu can be had for less than US$4, and a taxi ride to anywhere in Lima is no more than US$15. But some products are significantly more expensive, like bath and beauty products (i.e., lotions, shampoos and conditioners, toiletries, sunscreen, insect repellent, etc.). Higher end hotels typically provide complimentary bath and shower products, but it would be a good idea to bring your own sunscreen and insect repellent, since those things are comparatively more expensive in Peru.

Other Currencies in Peru

In major cities, a majority of upscale restaurants, big shopping malls, hotels, and large grocery stores will accept American dollars in lieu of soles, but sometimes it’s a lower exchange rate and expect change back in local currency. Also, it is not always guaranteed that the cashier will have enough bills to give you change, especially if paying with larger bills. The best practice is to use soles whenever possible and save American dollars for exchanging and emergencies. Make sure you have plenty of smaller bills in soles, like 10s and 20s. These bills are easier to handle, especially for small businesses and taxi drivers.

Travelers’ cheques are very uncommon in Peru. Use cash whenever possible.

Where to Withdraw and Exchange Money 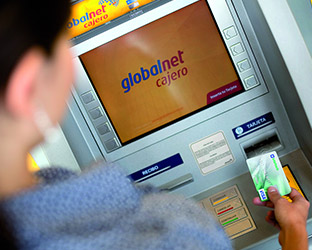 ATMs in Peru typically dispense nuevo soles and American dollars. Make sure you contact your bank to learn about additional fees for using your card in a foreign country.
Photo by interbank.com.pe

There are 4 major banking companies throughout Peru: BCP, Scotia Bank, BBVA Continental, and Interbank. These banks usually have ATMs (called cajeros automaticos in Spanish) at their branches, large supermarkets, shopping centers, and gas stations. ATMs usually dispense both American dollars and nuevo soles, but always bear in mind there are transaction charges every time you use the ATM. Consult with your bank prior to your trip departure to become aware of these fees as well as any specific instructions for using your debit card in Peru. 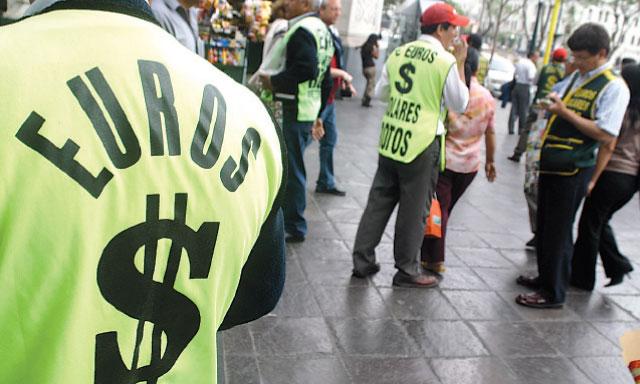 It is very easy to change money in Peru. Just look for the guys in the vests with currency decals. They are usually near banks, and they will give you the best rate.
Photo by larepublica.pe

Changing money in Peru is very easy. While you can exchange American dollars at banks and Casas de Cambio, more often than not you get the best rate when you exchange money with cambistas, or money changers. Cambistas wear brightly colored vests displaying a dollar sign and a euro symbol, and they usually stand in front of or very close to banks. Make sure the bills you are exchanging are not torn, ripped, or marked in any way, otherwise the cambistas might not accept them.

Click here to learn how to avoid counterfeit currency in Peru.

Lots of restaurants, hotels, and large shopping malls accept credit cards; usually Visa, Mastercard, American Express, and Discover, with Visa being the most widely accepted. Most establishments that accept credit cards will have a sign displaying which types of cards they accept, but it is always a good idea to ask beforehand. In restaurants it is always good to have some cash to tip the waiter and valet because gratuity cannot always be added to the bill. Check out our guide to tipping in Peru.

Anywhere you go in the world there is someone trying to make money off the goodwill and inexperience of others. Sometimes this takes the form of corrupt officials asking you to pay an unexpected “foreigner tax” or a taxi driver charging a traveler an extra few bucks for a trip across town. Every sojourner has experienced some form of this.

One of the most common ways for visitors to get swindled when they arrive in a new country is by means of fake currency. The nefarious types of the world prey on tourists who don’t know what real bills and coins should look like. Follow the advice below to avoid counterfeit and fake currency while traveling in Peru.

Though Peru uses some of the most advanced international security features, like watermarks, micro lettering, reflective stripes, security thread, etc. fakes are still out there. To help prevent fraud, the Peruvian Central Banks launched a simple and effective campaign to teach its citizens how to spot fakes. These methods for catching counterfeits work for all banknotes, regardless of value. It’s as true for a S/. 10 bill as it is for a S/. 200 note.

Peruvian money doesn’t feel like normal paper, that’s because it s printed on 100% cotton. The cotton gives the banknote a noticeably different texture and also makes it more resistance than ordinary printer paper.

When handling a Peruvian banknote you should feel be able to feel the details of the printed images on the bills. Try passing your fingers over certain areas of the bill. On the old Peruvian Nuevo Sol banknotes this feature can be felt at the printed name of the Central Reserve Bank and the National Emblem. The new bills have raised details printed at the left and right of the head.

Be mindful that older bills will be more worn and therefore more difficult to identify using the “feel” technique alone.

Look is probably the most effective technique. Start by holding the bill up to a light source. The area free of prints should feature a watermark. This is a basic security feature that most currencies worldwide possess and the Peruvian Nuevo Sol is no exception.

The watermark shows the image of the person whose face adorns that denomination. The watermark has multi-color and three-dimensional features giving you the impression of two (on the new bills three) distinct areas. Additionally, the watermark is formed by different thicknesses in the paper so it appears sharp and clear. On fake banknotes the watermark is printed on and tends to looks blurry.

The next security feature requires you to tilt your bill slightly. Hold the banknote horizontally in front of your eyes and move it up and down slowly. The denomination value (in the middle of old Peruvian Nuevo Sol bills and to the left of the image on the new bills) is printed with special ink (optical variable in) that changes color when slightly turned.

On new Peruvian Nuevo Sol bills you’ll see a hidden number and only on the new S/. 100 and S/. 200 bills moving fish when tilting.

It’s common to see people on the street verifying that the money they receive is in fact real, so don’t think you’ll look strange if you take the time to inspect your currency. Everywhere in Peru shopkeepers confiscate counterfeit bills and destroy them on the spot. It’s better to be safe than sorry.

One last thing, don’t be afraid to ask the person at the currency exchange house or the moneychanger on the street to replace a bill that you find suspicious. On the same note, don’t hesitate to ask for a different bill if a salesperson gives you an odd banknote. Be sure to ask for a different bill before you leave the establishment, other wise, they likely won’t exchange your money.

Do you have any other questions about the currency in Peru? Leave a comment in the comment section below! You can also contact us today to speak with an experienced travel advisor to plan all the details of your next Peru vacation! 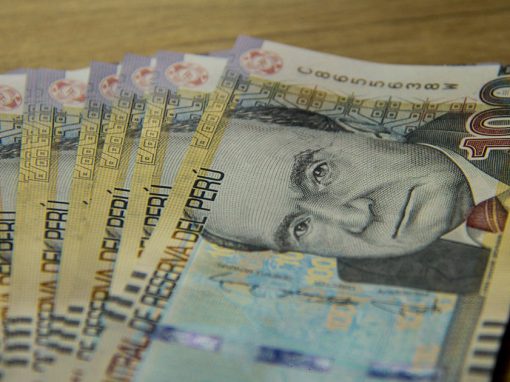 Tipping in Peru: Who to Tip and How Much

Learn about the proper tipping etiquette in Peru with our helpful guide.

END_OF_DOCUMENT_TOKEN_TO_BE_REPLACED 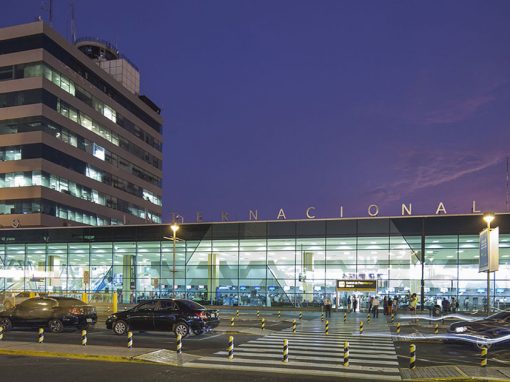