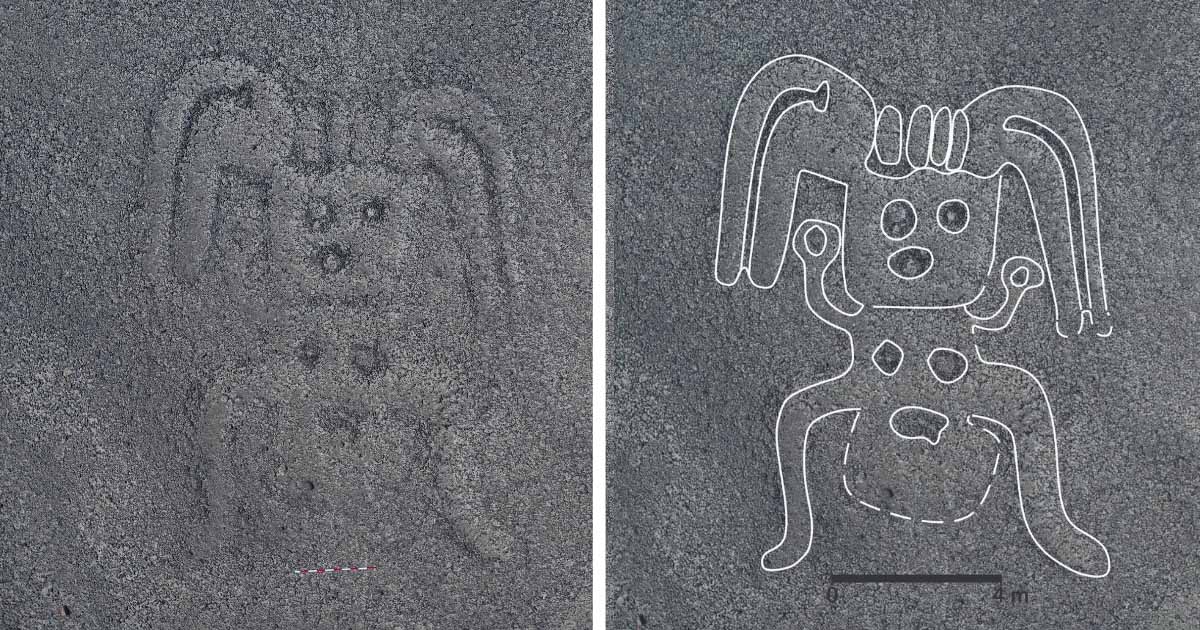 Just when you thought the Nazca Lines couldn’t get more mysterious and awe-inspiring, they have! Since 2004, a team of Japanese scientists have identified over 140 new Nazca Lines etched into the deserts of southern Peru. And for the first time, the team uncovered a previously unknown Nazca Line with the help of artificial intelligence.


What Are the Nazca Lines?

The Nazca Lines are a set of enormous geoglyphs, or large designs etched on the ground. They stretch across nearly 400 square miles in the deserts and plains of southern Peru near the present-day town of Nazca. The Nazca people created 300+ figures that depict different plants, animals, humanoids and other geometric shapes.

The lines roughly date back between 500 BC and 500 AD, making them one of Peru’s most ancient sites. For comparison, Machu Picchu only dates back to the 1400s.

The etches themselves are only around 4-6 inches (10-15 cm) deep. They were created by removing the top layer of rocks and dirt, exposing a lighter layer of sand below. The glyphs have lasted for so long due to the unique climate conditions in the area. In fact, with the lowest rainfall rate in the world and very little wind, the figures continue to exist so many years later.

Declared a UNESCO World Heritage Site in 1994, these figures continue to mystify archaeologists and delight travelers from all over the world. 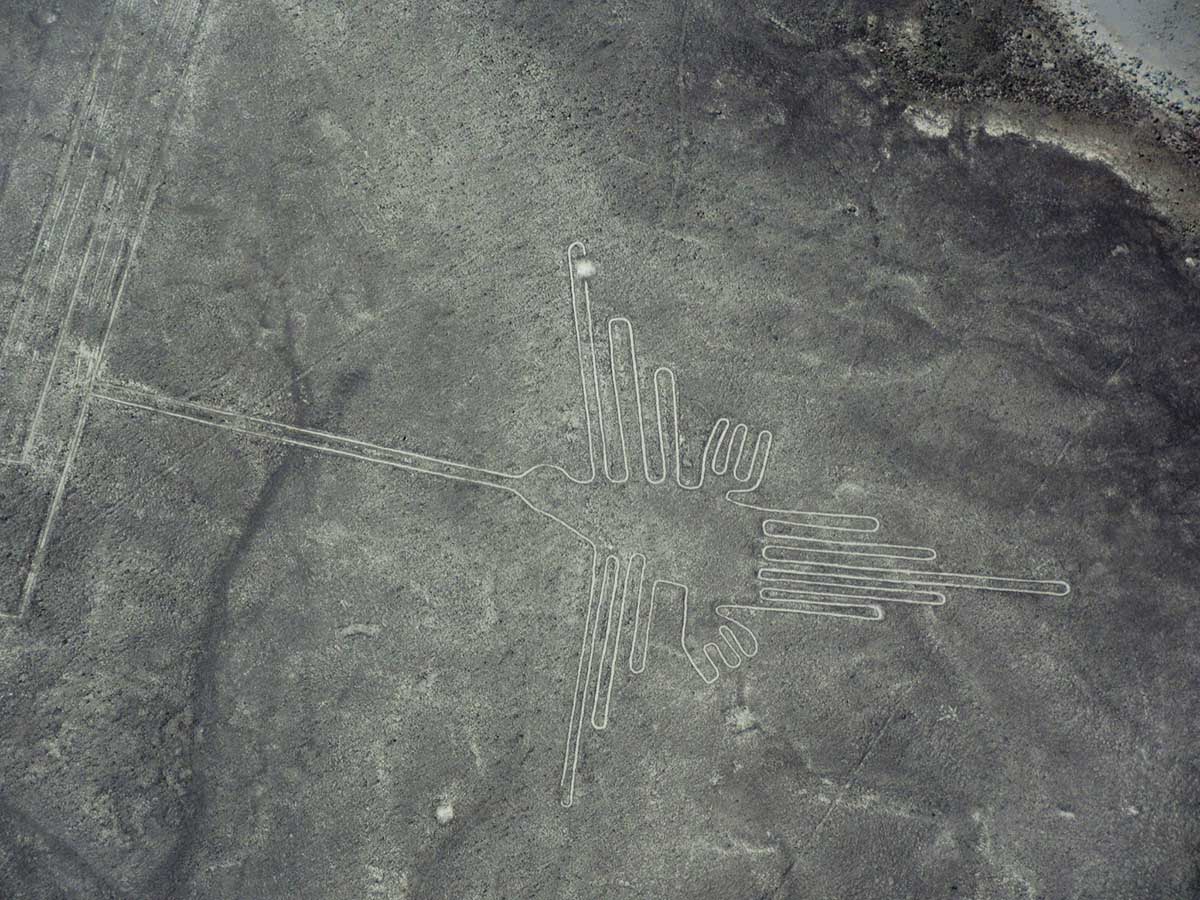 One of the most famous Nazca Lines, the hummingbird. Photo by Mike on Flickr.

Meaning of the Lines

Since scientists began researching the lines in the 1940s, many have tried to determine their meaning or purpose. While no theory is definitive, there are several Nazca Lines theories worth noting.

In general, scientists and researchers often associate the mysterious lines with astronomical cycles and cosmology. Another main theory believes the lines were built with religious significance, primarily to make offerings to the Gods. Other studies show that the lines were likely ritual and water-related. After all, the people that created the lines lived in a desert that sees almost no rain. Alternatively, the lines could simply have been maps or trail markers.

Over the years, some have questioned if aliens played a part in the creation of the lines. One geoglyph in particular, the Nazca Lines astronaut, seems rather futuristic. But, scientists have proven that no advanced technology was needed to create the lines and therefore discredited this theory.

While some animals depicted are from the desert region, others like parrots and monkeys show that the Nazca people had knowledge of the creatures in the distant Amazon Rainforest.

Given the lines were created in a thousand year window, it is probable that the meaning of the lines changed over time or were used for a variety of purposes. For now, the Nazca Lines mystery remains. Though no theory has been conclusive, the more clues to piece together the purpose of the lines, the better.

A newly identified Nazca Line of a fish. Photo provided by Yamagata University.

Since 2004, a team of scientists, led by Masato Sakai, a professor of archaeology at Yamagata University in Japan, has discovered 143 new lines.

Their research uncovered many impressive new Nazca Lines in the Peruvian desert. The newly identified geoglyphs depict humanoids, animals and abstract objects. Some prominent animals include birds, camelids (like llamas and alpacas), cats, fish, foxes and snakes, among others.

The figures vary greatly in size. To illustrate, the longest stretches across 330 feet (100 meters) while the smallest is under 16 feet (5 meters). In regards to their age, researchers determined these geoglyphs date back between 100 BC and 300 AD.

The team identified two distinct types of figures. The first are larger and in the shape of animals. At these sites, they found smashed pottery, leading them to believe these were ritual and ceremonial areas. The second group of figures are smaller and located near paths or on sloping inclines. These geoglyphs can be seen from ground level, compared to the larger figures that can only be seen in their entirety from above. Due to their location, the researchers determined they were most likely trail markers.

To complement their impressive field work, the research team has been working with modern technologies, like IBM’s PAIRS Geoscope. This deep learning artificial intelligence (AI) was able to review innumerable satellite images, aerial photos and laser data. All of this combined to detect and confirm a new Nazca Line: a humanoid geoglyph, the first uncovered with the help of AI.

According to the History Channel, “the glyph was so faded that researchers may not have identified it without this technology.” As each shape is different, AI may find it difficult to learn what to look for, but this recent discovery proves optimistic.

With more discoveries come more questions. “It is very difficult to recognize the purpose of this formation and the societal role of the humanoid,” said Sakai, in an interview with Live Science. The figure is situated near a path, so there is some speculation that it could have served as some kind of waypost marker. 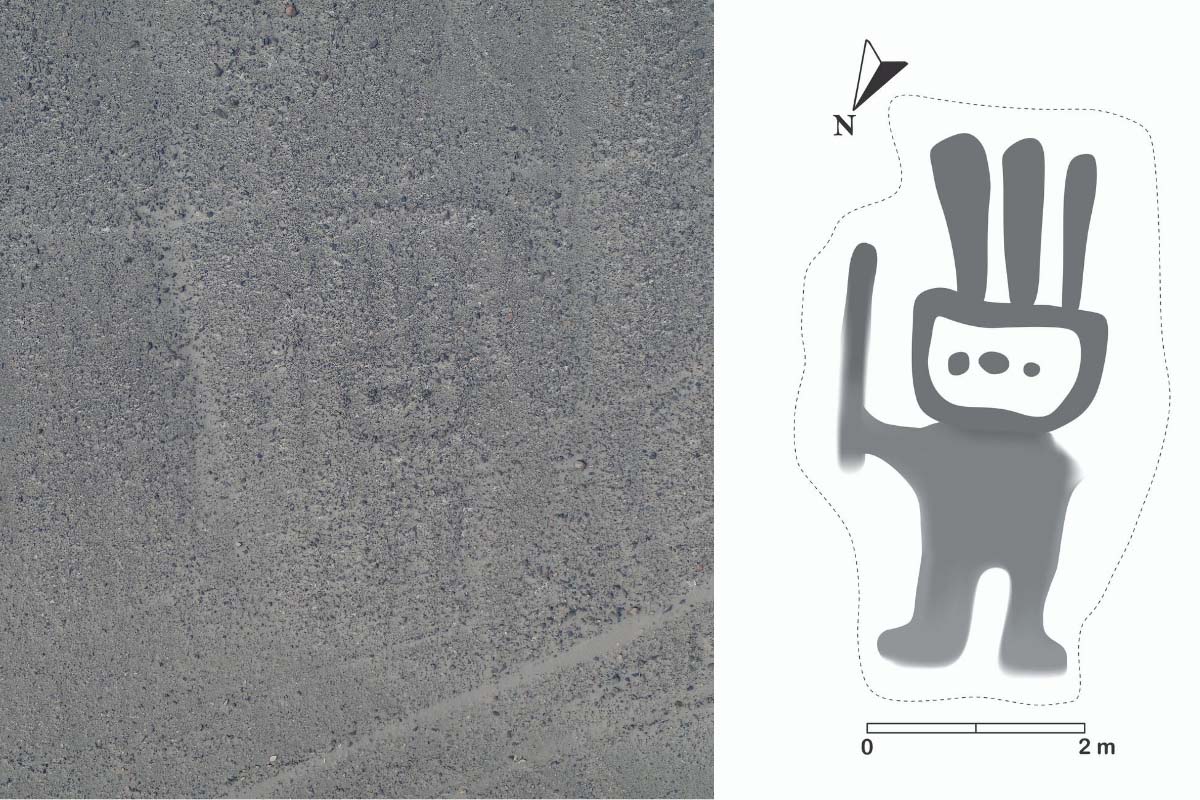 A humanoid Nazca Line, the first identified with the help of AI. Photo provided by Yamagata University.

In October 2020, archaeologists and their technical staff made a new discovery: a 121 foot (37 meter) long cat-shaped geoglyph. While cleaning the mound of a natural lookout point, they unearthed this previously unknown glyph. The feline figure was barely visible, so they proceeded to clean the lines to reveal the true shape in the following weeks.

With pointy ears, round eyes and a long, striped tail, the cat is reminiscent of figures found in artifacts, especially textiles, of the Paracas culture. Because of this, the team has determined that this glyph is from the Late Paracas period, making it older than the Nazca Lines. More specifically, they estimate this new glyph dates back to 200-100 years BCE.

At the side of a hill, the glyph was at great risk of disappearing due to natural erosion. Now, scientists and their teams can protect it alongside the Nazca Lines for many generations to come. 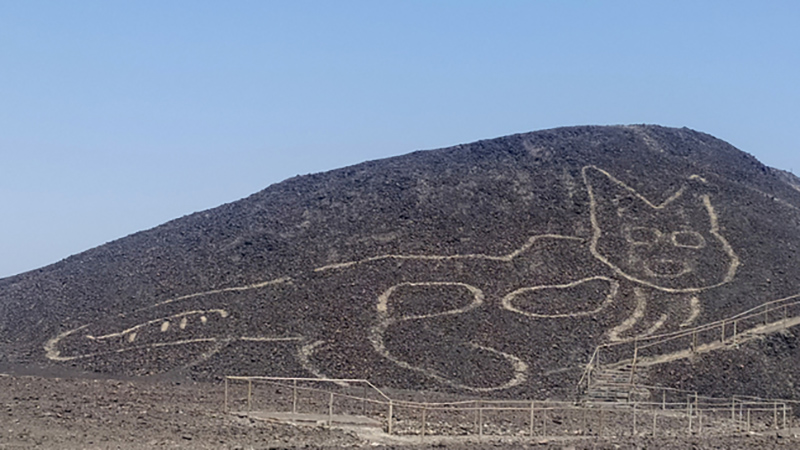 A newly discovered geoglyph with a feline shape near the Nazca Lines in Peru. Photo by the Peruvian Ministry of Culture.

Researchers are working to protect the zone where the new geoglyphs have been found. While the weather of the arid plains does not threaten to erase the lines, other issues like urbanization might. “The Nazca Lines are also at risk of mining and illegal agriculture,” as stated in the Smithsonian Magazine

Continuing with the help of AI, researchers plan to create an expansive map of the geoglyphs in the Nazca and Pampa deserts. Along with the Peruvian Ministry of Culture, the new information will help to protect these important heritage sites from future construction projects as urban areas expand.

Also, the success of AI technology means more possibilities with archaeological research of the area in the future. With the discovery and preservation of these ancient wonders, comes a better chance of understanding more about these shapes and those who etched them. 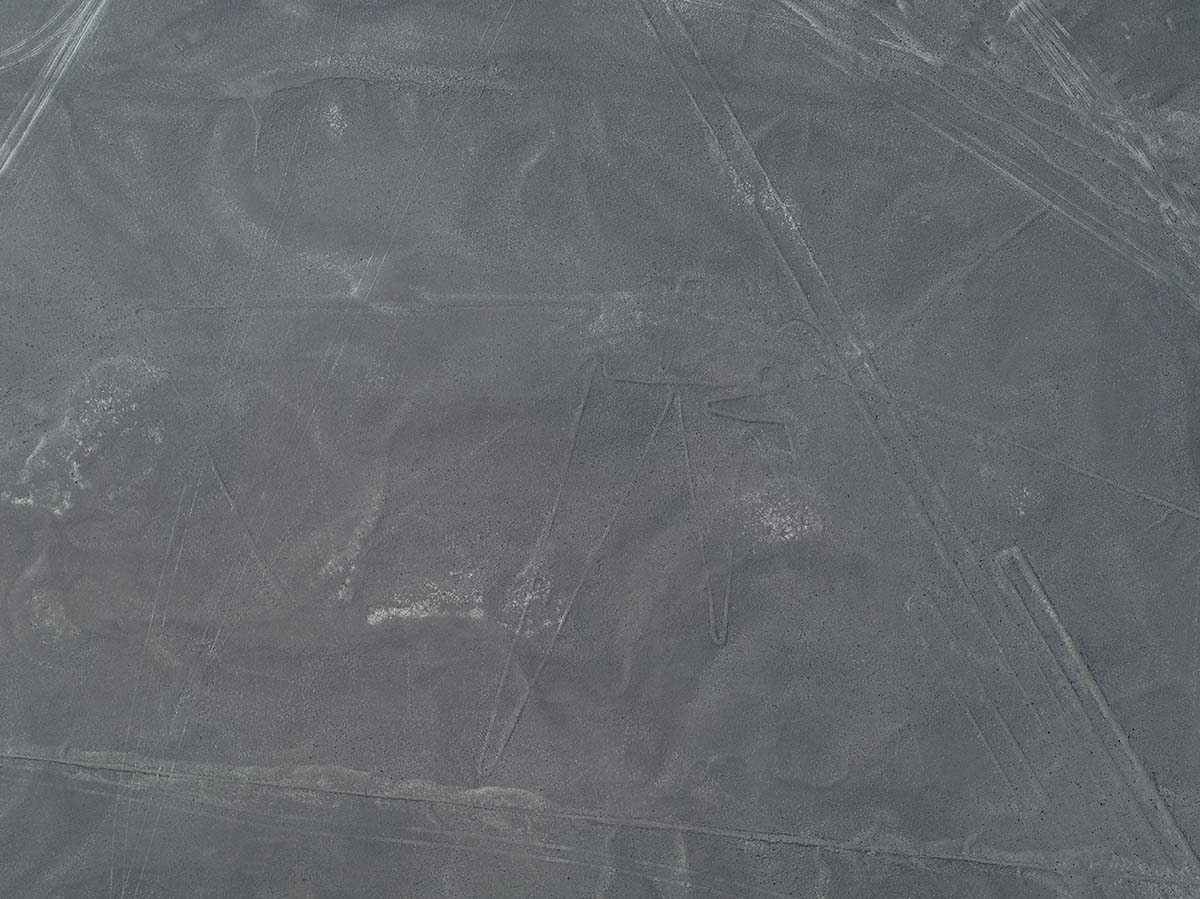 A recently identified Nazca Line of a bird. Photo provided by Yamagata University.

How to See the Nazca Lines

While the newly identified lines are not included in any current Nazca Lines tours, travelers can visit several of the ancient glyphs on their trip to Peru.

Nazca Lines flyover tours typically fly past 16 of the most famous glyphs from above, like the Nazca Lines hummingbird, spider and astronaut. Flights depart from the Pisco, Ica and Nazca airports daily. As an alternative, a small observation tower overlooks the hands, the lizard, and the tree for those that do not take a flight. Read more about how to see the Nazca Lines here.

While researchers continue to explore and identify new Nazca Lines, we hope to gain more insight about the unique ancient cultures from Peru’s coast. In the meantime, why not travel to Peru to see the most famous Nazca Lines for yourself? Contact us to set up your custom Peru travel package and Nazca Lines tour. 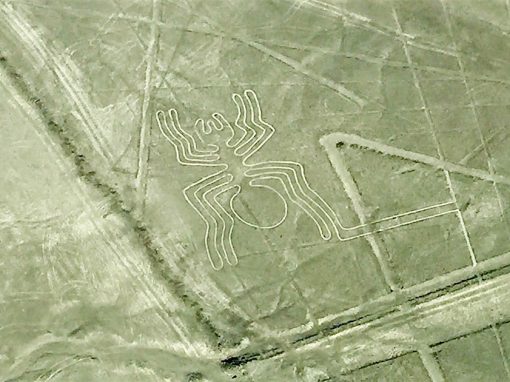 Learn about the history, meaning, location and tour options for one of the world’s greatest mysteries, the Nazca Lines located in the desert plains of Peru.

END_OF_DOCUMENT_TOKEN_TO_BE_REPLACED 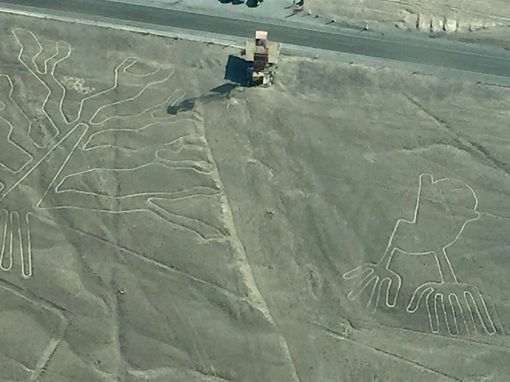