Image: Lima" by Heather Sperling, used under CC BY 2.0 / Cropped and compressed from original

Peru is certainly one of the most biodiverse places on earth and consequently has a large number of unique and nutritious foods. Perhaps the most well-known is the ancient Inca crop quinoa. But have you ever wondered why quinoa is so popular? Or why it is considered a superfood? Keep reading to learn all you need to know about one of the world’s most popular health foods!

Quinoa, originally called the “mother grain” by the Incas, is the seed from the Chenopodium quinoa plant that grows in the Andes. The plant is a member of the goosefoot family and can grow from three to seven feet high. Although the plant prefers cooler temperatures, it is otherwise very robust. In fact, it can grow in pretty poor soil.

Often mistaken as a whole grain, it is actually a pseudo-cereal. In other words, quinoa is a seed that acts like a grain. Being a goosefoot, the plant itself is more like spinach and beets than whole grains like wheat or oats. What many also do not know is that both the seeds as well as the leaves are edible.

The seed is often labeled as a superfood since it is not only gluten-free but also contains more protein, vitamins, minerals, and fiber than the usual grains and seeds.

These purple seeds growing in Peru are ready for harvesting. Image by Jai79 on Pixabay

Overall, there are more than 1,800 subspecies of this ancient Inca crop, and the seeds come in a variety of colors. By and large, the most common colors are white, red, and black. However, the seeds also exist in purple, pink, gray, orange, green, and yellow.

The white seed is the most well-known and widespread type of quinoa. This is because it has a light flavor, cooks the quickest, and has a nice fluffy texture. In contrast to the red and black types, the white one is not at all crunchy.

Compared to white seed, the red type has a richer, more prominent taste that resembles nuts. It also has a heartier texture, since it holds its shape better after cooking. Therefore it is a great option for salads.

Black quinoa has an earthy but sweet flavor. It keeps its color when cooked and has a similar heavy texture to the red type.

Red, white and black seeds are the most common colors of quinoa. Image by Pierre Bamin on Unsplash

Quinoa originated in the altiplano of Bolivia and Peru. Surprisingly, the seed was initially only used to feed livestock. Then, around three to four thousand years ago, humans began using it for their own consumption as well.

For ancient civilizations like the Inca, as well as modern Aymara and Quechua people, quinoa has always played an important role. As a matter of fact, they use the crop for both nutrition and as a sacred element during their rituals and religious festivals.

When the Spaniard Francisco Pizarro reached the Andes in 1532 looking for gold, he and his men destroyed most quinoa fields as they conquered the region. The colonizers also brought their own grains like wheat and barley from Europe. Since these were easier to grow and much more fruitful, quinoa lost much of its importance. For this reason, only isolated Andean villages continued to grow quinoa.

It continued to be a crop for poor farmers until the 1970’s when American researchers brought it back to the US. Because it was labeled a superfood, it gained popularity worldwide in the past couple of decades. Due to this rapid increase in demand for quinoa, the crop prices tripled from 2006 to 2013.

Nowadays, it is one of the most popular health foods out there.

Historically quinoa has played an important role in the lives of the indigenous populations. Image: Peru by Natumano photo, used under CC BY 2.0 / Cropped and compressed from original

Quinoa is incredibly nutritious and a particularly great addition to any healthy diet. The UN even explicitly named the year 2013 the “International Year of Quinoa” in honor of the superfood.

Here is a list of the top seven health benefits of quinoa:

Since quinoa is not a real grain, it is naturally gluten-free. For that reason it a great option for anyone with gluten sensitivity or intolerance.

Another fantastic benefit is its richness in fiber. One cup of the seed contains roughly five grams of fiber, which is around twice as much as most grains. Fiber promotes good digestion and can help reduce blood pressure and cholesterol.

Evidently, quinoa is one of the most protein-rich foods with about eight grams per cup. Since it is a complete protein it contains all nine amino acids that our bodies need.

The seed has a dense concentration of iron. In one cup you can find around three milligrams of the mineral. The recommended daily intake of iron ranges between eight and 18 milligrams. We especially need iron for our hemoglobin production.

5. It is high in manganese

Quinoa is also very high in antioxidants. In essence, antioxidants help protect our cells and red blood cells from damage by free radicals. The recommended daily intake is 2.3 milligrams. One cup already contains around 1.2 milligrams.

6. It is high in magnesium

Magnesium plays an important role in muscle recovery, controlling blood sugar, and the formation of healthy bones and teeth. While 300-400 milligrams are recommended as a healthy daily intake, one cup of quinoa already contains 118 milligrams of magnesium.

Lastly, 100g of quinoa contains 239 mg of lysine, so 10% of your daily recommended intake is already covered.  This amino acid is essential for tissue growth and repair.

In summary, you can expect the following nutrients in one cup of cooked quinoa:

A great addition to any healthy diet! Image: I gotta get that extra quinoa on my dinner plate” by F Delventhal, used under CC BY 2.0 / Compressed from original

Where to Buy & How to Store Quinoa

Generally, you can buy quinoa in health food stores or in regular supermarkets. Usually, it is found near rice, beans, and grains. Another option is to buy it online.

As with other dry ingredients, the seeds should be stored in air-tight containers placed in a dark and cool spot. When stored correctly, the dry seeds will last for two to three years. However, you should always make sure to check the expiration date or best by date before consumption. Once it is cooked you can store it for up to five days in the fridge.

Nowadays quinoa is easy to find in supermarkets or online stores. Image: Quinoa” by Pedro Reyna, used under CC BY 2.0 / Compressed from original

How to Cook Quinoa

This is a necessary step since quinoa seeds have a coat of saponin, a natural insecticide. Although harmless to humans, if not washed off, it gives the seeds a bitter taste and also makes it harder to digest.

The best ratio is 1 part quinoa (eg. 1 cup) with 2 parts water (eg. 2 cups). Firstly, bring the water to a boil. Then add the quinoa to the boiling water and cover the pot with a lid. Reduce heat and let it simmer for 15 minutes or until the water has been soaked up.

Once the quinoa is cooked, set it aside while still covered and let it rest for 10 minutes.

After letting it rest, fluff up your quinoa with a fork.

Cooking this Andean seeds is easier than you think. Image: DSC_2261” by Crosa, used under CC BY 2.0 / Compressed from original

Quinoa can be used in a variety of both sweet and savory dishes. Here are some ideas on how to use it in your next meal.

A great way to start your day! Image by odovolenkesk on Pixabay.

Hearty soups are the perfect way to warm up on chilly Andean nights. Image: Sopa de Quinoa” by Robert Luna, used under CC BY 2.0 / Compressed from original

Thanks to its great number of nutrients, quinoa is undeniably one of the healthiest foods in the world. And not only is it healthy but also super delicious and easy to prepare. All in all its versatility will make it a fantastic addition to your next meal!

Interested in trying quinoa in Peru’s traditional dishes? Then contact our expert Travel Advisors to start planning your dream trip to discover the richness of Peruvian flavors!

Born and raised in Germany, Sabrina was lucky enough to extensively travel through Europe from a young age. Being bitten by the travel bug and aspiring to explore more countries and cultures away from home, she decided to travel to South America. After traveling to Chile, Brazil, Uruguay, and Argentina she fell in love with the continent and decided to settle in Peru.

15 Peruvian Superfoods That Will Change Your Life

Discover the rich vitamins, minerals, antioxidants and flavors in these mind-blowing Peruvian superfoods that hail from the Amazon to the Andes

END_OF_DOCUMENT_TOKEN_TO_BE_REPLACED 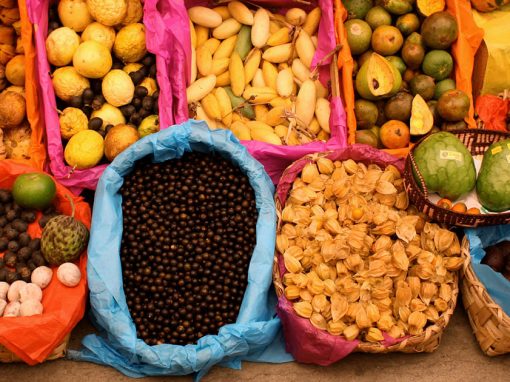 Peruvian Food Glossary: The Ultimate Guide from A to Z

Discover the unique Peruvian cuisines, ingredients, and dishes in this Peruvian food glossary. Find out what the world’s top culinary destination cooks and eats!