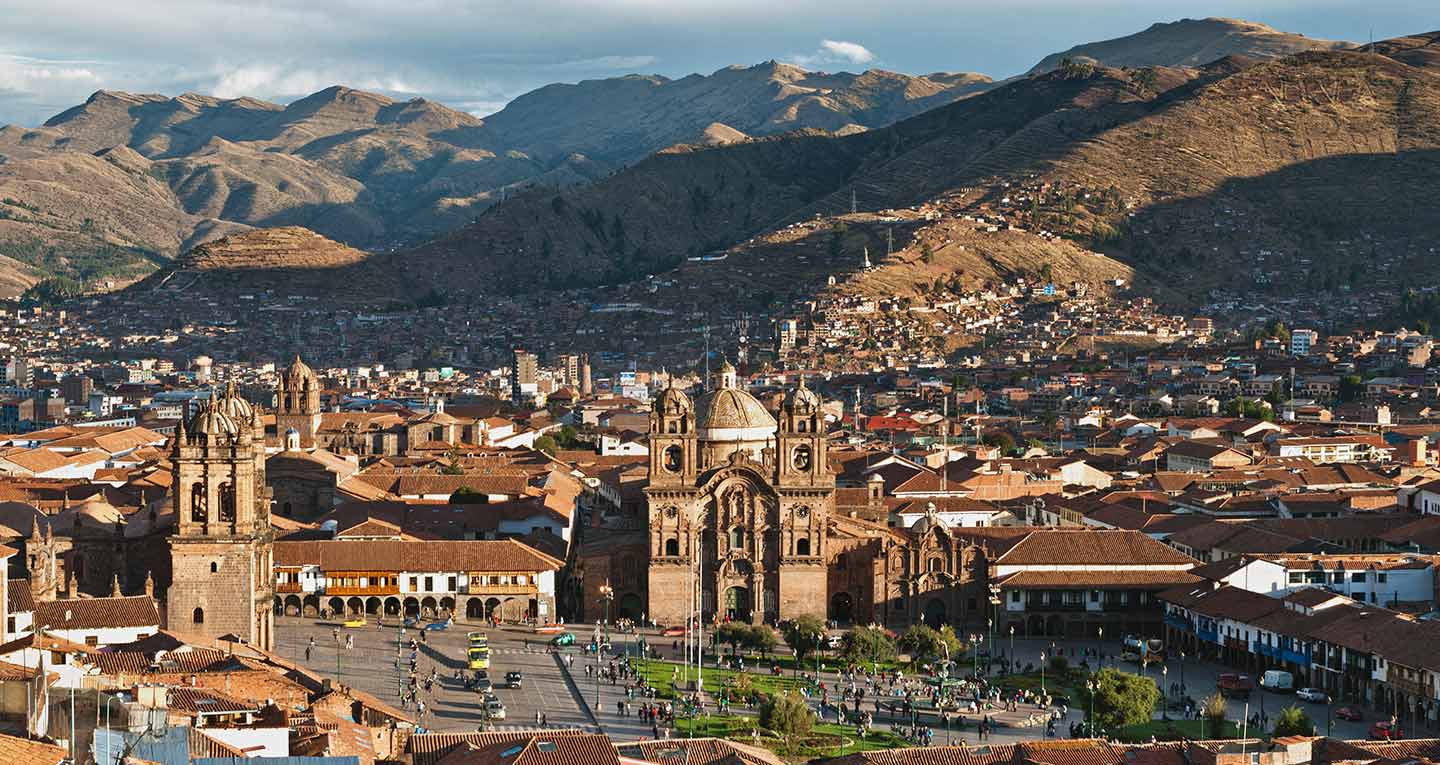 What happened to Andean beliefs and practices after the Conquest? Witness one of Cusco’s religious or cultural festivals and you’ll see that they never went away.

Throughout Peru’s colonial period, missionaries sought to eliminate “pagan” practices among indigenous populations. But ancient beliefs often became cloaked under Catholic symbols and imagery and survive into the present.

In modern-day Cusco, whether it’s the processions of Easter Week or the celebration of Peruvian Independence in July, no public event is complete without performances of folkloric music and dance that recall the oldest traditions of the Andes.

Participants in Cusco’s festivals spend weeks preparing elaborate costumes and choreographing dances. The result is a spectacle of sound, movement and color that you won’t want to miss.

#2 Explore the Path of the Inca

Cusco has a calendar full of cultural events. No matter when you travel to Peru, there’s likely to be something special about to unfold either in Cusco or a nearby town.

In February, all of South America is consumed with Carnival celebrations each with their own flavor or style. Some major cities in Peru — Cajamarca, Ayacucho and Puno, as well as Rio de Janeiro in Brazil and Oruro in Bolivia — are famous for their Carnival festivities. Cusco’s celebrations are more modest but culturally rich.

A city-wide water fight breaks out on the first Sunday of Carnival. Spray cans of foam, silly string, and even flour and balloons full of paint are also made into Carnival weapons. Any person out on the street is a potential target for drenching, and in the spirit of Carnival, anything goes.

On the next Sunday, the end of Carnival, a tradition called yunzada is celebrated in and around Cusco. The yunza is a tree that is planted in the ground and decorated with gifts. Couples dance around the tree and take turns hacking it with a machete to try to knock down gifts. Whoever strikes the blow that finally knocks down the tree will be responsible for organizing the next year’s yunzada.

Traditional dishes served during Carnival include puchero, a stew with alpaca and various other meats, vegetables, fruits and tubers; and kapchi, another stew of broad beans, potatoes, wild mushrooms (called setas), milk, and white rice.

Semana Santa in Cusco provides a remarkable example of how Catholic observances are infused with Andean elements.

In August of 1650, Cusco was struck by a major earthquake that crumbled many of the city’s colonial buildings. Severe aftershocks roiled the city, continuing one after another until finally the desperate populace carried a statue of Christ from its altar in Truinfo Church and out to the main plaza. The people began to pray to the image and, as if in answer, the ground finally ceased its movement. Since this date, Taytacha Temblores or “Lord of Earthquakes” has been revered as the patron saint of Cusco.

On Monday of Semana Santa, Cusco hosts a unique procession. From dawn until noon in the Cusco Cathedral, masses are celebrated in honor of Taytacha Temblores and at 2 o’clock in the afternoon, the statue is carried out from the church upon a litter and paraded around the streets of the historic center, which are carpeted in flowers. Up to 80,000 people gather on the plaza to receive the blessing of Señor de los Temblores.

On Friday, San Francisco Monastery sponsors a reenactment of the crucifixion of Christ in a procession from San Francisco Church to a cross at Sacsayhuaman. In front of San Pedro market, highland farmers come to sell medicinal plants and herbs in an event called Hampi Rantikuy.

Easter Sunday is a family day, when people go to church to hear Mass and then return home to share in the tradition of eating 12 typical dishes, said to represent the 12 apostles, and featuring local ingredients such as olluco (a type of tuber), choclo (giant corn), and trucha (river trout).

Ausangate was and is one of the principal apus (mountain spirits) of the Andes. Like other high peaks, it’s been a pilgrimage site for thousands of years and is believed to have been linked to the appearance of Pleiades. After the Spanish Conquest, Catholic elements were infused into the annual pilgrimage. Today’s Qoyllur Ri’ti (or Snow Star) celebration is an amalgam of old and new, but with Andean symbols and practices playing a central part.

For the festival, an estimated 10,000 pilgrims from nearby villages (but also from neighboring Andean countries) arrive to Sinakara chapel at the base of Ausangate. A select group of men, known as ukukus, ascends to the top of the mountain at 6,362 m. They spend the night in vigil, chisel out a chunk of glacial ice and bring it back to the chapel in the morning. This trek in thin air is dangerous. Among the people who take up the challenge, not all return.

Those who stay in the makeshift camp observe 3 days of nonstop dance and prayer in a ritual of renewal. Dancers wear the finest textiles from their communities and in their dances represent characters from diverse parts and historic periods in Peru.

On Tuesday, some of the pilgrims continue to Cusco, and on the Wednesday night (before Corpus Christi) they dance on the main plaza.

One of Peru’s most important religious events, Corpus Christi is a visually stunning procession of the patron virgins and saints from Cusco’s different neighborhood churches.

The event begins with the “entrada” on Wednesday of Corpus Christi week, when the statues are carried in procession from the parish church to the Plaza de Armas. The procession arrives to the Cathedral where the statue is placed until the following day.

Early on Thursday morning, masses are said for each of the saints and virgins and at 10:30 am the Archbishop recites a special blessing (Te Deum) and the procession begins. At the front is the silver Baldaquino or carriage with canopy that covers the monstrance, where the communion hosts are stored. The saints and virgins follow. Approximately 50,000 people gather on the Plaza and surrounding streets to watch. After the procession, the images return to the Cathedral where they will remain until the Octava, eight days later. The saints and virgins are then carried in procession a final time before a return to their respective parishes.

Inca festival of the Sun

In the Inca cosmology, Inti, the sun god, was the principal deity of the Andean world. “Inti Raymi,” meaning festival of sun, was celebrated on the date of the winter solstice. During the 9-day celebration, representatives from across the Inca Empire (Tahuantinsuyo) gathered in Cusco to mark the beginning of a new planting season. The Inca king and temple priests made sacrifices and offerings to Inti to ask for plentiful harvest in the coming year.

In 1572, about 40 years after the fall of Cusco, the Spanish Viceroy Francisco Toledo formally prohibited the celebration of Inti Raymi in an attempt to eradicate all pagan beliefs among the population. Like many other pre-Columbian practices, the celebration went underground.

Beginning in the 1920s and inspired by the symbolism of Machu Picchu, an indigenist movement among Peruvian intellectuals sought to recuperate ancient Andean traditions. Cusqueños studied colonial source documents and pre-Columbian oral traditions to piece together a new interpretation of Inti Raymi. The first modern Inti Raymi festival was celebrated in 1944.

Today’s celebration begins at the ruins of Qorikancha, the temple of gold that once housed a huge golden disk representing Inti. An actor portraying the Inca opens the ceremony with a blessing in Quechua. Then he’s carried upon a litter preceded by hundreds more actors representing ñustas (queens and princesses), dignitaries, and foot soldiers. The procession passes through the Plaza de Armas and continues to Sacsayhuaman.

The main event takes place on June 24. But the days before and after are also filled with festivities. In the evening of the 24th, live music bands perform on a soundstage in front of the Cusco Cathedral.

Note: This event takes place in Paucartambo and in Pisac

On July 16, the Virgin del Carmen, known locally as Mamacha Carmen, is taken on procession. Paucartambo’s festival is the most famous one, but Pisac’s has recently been recognized as part of the cultural patrimony of Peru. Both are worth seeing for the fervor of religious devotion that participants display and for the mixture of Catholic and Andean symbols.

In either town, the festivities begin with a Catholic Mass, followed by music and numerous dances which represent various themes. The main procession of Mamacha Carmen is in the afternoon, when people stand to watch the image of Virgin Mary pass by. The celebrations continue for 3 days until July 19, when Mamacha Carmen is placed back on her altar and changed into her usual clothes to await the next cycle of celebration.

The date of Peru’s independence is celebrated with great fervor throughout the country. In Cusco, you’ll see the red and white flag waving everywhere. Representatives from Cusco’s institutions, ranging from the police force to universities and primary schools, organize processions that fill the main plaza on weekends throughout July.

On July 28-29, there are more parades and folkloric dance performances during the day, fireworks and a music concerts at night. On Plaza Regocijo, a gastronomic fair features typical foods and drinks from Peru’s different regions.

Cusco’s Catholic identity is perhaps most visible around Christmas. Churches sound with musical choirs, balconies are primped with decorations, and nativity scenes are installed in homes, businesses, and institutions public and private.

The Feria de Santurantikuy, held on the main plaza on December 24, is where people come to buy and sell objects and adornments for nativity scenes. Hundreds of artisans from around Cusco and from as far away as Puno come to display their wares rendered in techniques ranging from silver- and tinwork to embroidery. The most famous figure is El Niño Manuelito, a representation of the child Jesus, in various sizes and styles of dress. In addition, you’ll see miniature animals of every possible species and freshly-picked native flora.

Unless otherwise noted, there is no cost to watch public processions, events, and activities in and around the Plaza de Armas. Locals begin to arrive very early in the morning to stake out the best viewing spots.

June to August is the high season for travel to Peru, coinciding with Cusco’s most important festivals including Inti Raymi and Corpus Christi. Semana Santa, Christmas, New Year’s and are also quite busy periods. Hotels and other services sell out weeks in advance. Book early to avoid disappointment.

A few restaurants and cafes around the main plaza have balconies. You’ll get prime views of the action if you can snag a seat.

Take standard precautions in crowded areas. Avoid becoming a target for pickpockets by leaving valuables at your hotel. Keep your belongings close to you at all times.

Major streets in the historic center of Cusco may be closed to vehicular traffic during processions and other events. Allow extra time to get in, out, or around the city if you’re traveling during a festival.

Every year, the last night of May marks the beginning of the Festejos Jubilares del Cusco, a month-long celebration of Cusco history and culture. The schedule of June events includes film showings, lectures, food fairs, folkloric dance performances, military processions, school parades, and more. Just take a wander around the historic center and you’re likely to run into something!

For a taste of the city’s culinary fusion and traditions, be sure to check out these first-class Cusco eateries.

Cusco’s folkloric music and dance traditions are cultural treasures. Dance plays a central role in the region’s year-round festival calendar. While each festivity tends to honor a different patron saint, the regional dances that are performed share many similarities.

How to get to Cusco: Planes, trains, and automobiles

Travelers can take a plane, train, or bus to Cusco. Learn more about these transportation options to decide which one is best for you and your travel buddies.