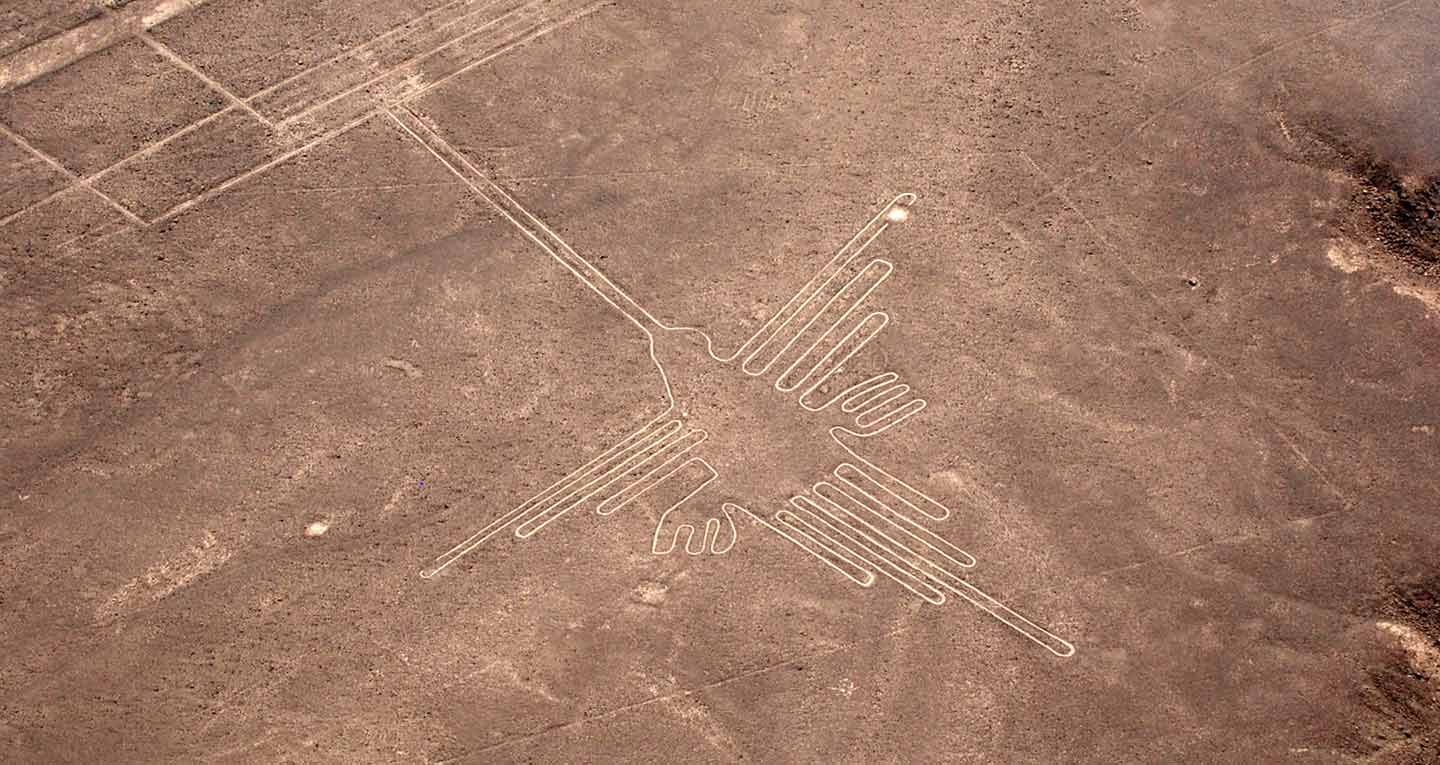 The ancient people of Nazca etched figures into the desert floor on a scale so large that they’re impossible to see from the ground. Perhaps we can never know the reason why, though scientific explanations abound. What you can do is hop on a plane and see the glyphs for yourself. Browse our guide below for essential facts and travel tips to help you plan a Nazca Lines tour.

The unexplained hieroglyphics outside of Nazca city are the main attraction for travelers in Peru seeking history with an air of mystery. Begun around 400 BC and possibly continued for another thousand years, these immense representations of geometric shapes and animals and human figures spread across more than 500 square kilometers between the Nazca and Ingenio Rivers. The lines are incredibly precise, featuring clean curves and straight edges carved directly on the surface of the earth. Experts believe that the Nazca people made the lines as way to worship the principal deities who controlled weather and natural phenomena such as rain and earthquakes.

The only way to fully appreciate the size and scale of the Nazca Lines is from high above the earth. Flights depart from the small airport in Nazca, as well as from the airports in Ica and Pisco. Read our Travel Tips section to learn how you can fit a Nazca Lines tour into your Peru vacation.

If you would love to see the Nazca Lines, but motion sickness is the major reason why you would not book a flight, you can instead climb the Observation Tower (13 meters high) for a satisfying look at two main shapes, Tree and Hands. Further in the distance and on clear days, you can see the highway cutting through the Lizard glyph. A second mirador is located on a hilltop 5 km away and offers views of straight edge lines.

Get there: From Nazca city, the tower is located 20 km to the north along the Panamericana Highway.

Photos, equipment, maps, drawings, pottery, paintings, artifacts, scale models, and a mummy are what you’ll see on a visit to the house-museum of the Nasca Lines’ most dedicated researcher, Maria Reiche. Located north of Nazca city and adjacent to the Nazca Lines archaeological site, this small museum is worth a stop in combination with the observation tower.

The Nazca Lines are situated in the Peruvian coastal desert 400 kilometers south of Lima and extend across a surface area of 450 square km. There are two main groups of lines, the first and most famous near Nazca city, and the second further north near Palpa. Experts believe that the lines were made by removing a top layer of dark red surface stones and revealing the lighter colored soil underneath.

The city of Nazca sits at an elevation of 520 m (1,700 ft) above sea level. The surrounding desert is fairly flat until it meets the western ridges of the Andes Mountains.

High temperatures and extreme aridity characterize Nazca region. Rainfall is almost nonexistent throughout the year, except in January and February.

The dry, windless conditions have been key in the preservation of the lines over thousands of years.

Before the Nazca, the Paracas culture inhabited the Paracas Peninsula and the Ica Valley. Paracas is one of Peru’s earliest civilizations, renowned for its polychrome ceramics, intricately patterned textiles, and treasure-filled burial sites.

Early Nazca period – the culture flourishes in the river valleys of Rio Grande and Ica.

The Nazca are most famous for the Nazca Lines, giant geoglyphs etched into the hard desert floor. The lines include geometric and animal figures that have remained remarkably well-preserved by the dry climate.

Nazca ceramics are valuable sources of information about the culture, depicting scenes of daily life, foods, plants, fauna, rituals, and deities. Examples of Nazca ceramics and textiles are on display in the Museo Arqueologico Antonini in Nazca, the Regional Museum in Ica, and the Anthropological and Archaeological Museum in Lima.

Ceremonial center of Cahuachi was inhabited from 1 AD – 450 AD. Archaeological evidence suggests this was not a city, but rather a pilgrimage site where agricultural, water, and fertility rituals were performed. Its abandonment is linked to ecological stresses including a pan-Andean drought that kickstarted the decline of the Nazca culture.

Middle Nazca period – Severe El Nino event triggered widespread and destructive flooding across Peru. Erosion in the Nazca valley worsened because generations of farmers cut down forests of the native trees to plant cotton and maize.

Emphasis for building projects shifted from the construction of monumental structures to agricultural and hydraulic technology. An extensive system of aqueducts (puquios) was built to tap into abundant groundwater for irrigation. This allowed the civilization to flourish despite the arid climate.

Late Nazca period. Waning of the Nazca culture and rise of Wari (or Huari) culture. This marks a shift in pre-Columbian civilizational power from the coast to the Andean highlands.

When Inca influence expanded to the coastal areas, they found the descendants of the Nazca culture still living in the desert valleys. Old irrigation canals remained in use and ancient symbols were preserved in textiles.

Los Paredones served as Incan administrative complex and a crossroads between the mountains and the sea. Scholars believe that the original Inca name may have been “Cajamarca.” The site consists of three small plazas, a tower with views over the Nazca valley, and various temples.

During the Spanish colonial period, the Ica valley becomes a center for viticulture. The region’s wine and pisco (grape brandy) are distributed throughout the Viceroyalty of Peru and beyond.

Following a trail of Paracas textiles, the Peruvian archaeologist Julio C Tello begins excavating a large necropolis on the Paracas Peninsula. He discovers hundreds of mummified bundles wrapped in textiles.

The Peruvian archaeologist, Toribio Mejia Xesspe spots the Nazca Lines while hiking through the desert foothills. His theory is that the lines are sacred roads.

The U.S. scholar Paul Kosok begins studying Nazca irrigation systems and notices the lines. Kosok finds that some of the glyphs align with the winter solstice and constellations, and calls the lines “the world’s largest astronomical book.”

In 1940, the German mathematician Maria Reiche takes over study of the lines from her mentor Kosok. For the next five decades, she devotes her life to deciphering the enigma of the geoglyphs.

Magnitude 7.5 earthquake levels the city of Nazca causing loss of lives, a great number of injuries, and massive structural damage. Since then, the city has been rebuilt.

How To Fit Nazca Into Your Peru Trip

There are two main ways to fit the Nazca Lines into a Peru itinerary.

Option 1 is as a 2-day side trip from Lima

Option 2 is as part of a longer overland trip across southern Peru. There are multiple ways to split the trip. It is possible to arrive on an overnight bus (from Paracas or from Lima), fly over the lines, and continue to your next destination in the evening. You can also stay 1-2 nights in Nazca city to explore archaeological sites and museums.

To save time, many travelers choose to travel from Lima to Pisco (237 km, or 150 mi) and fly out from the Pisco airport with a return to Lima the same day or with an overnight in Paracas for a Ballestas tour the next morning. Additional flights are available at the airport in Ica city.

Bus: Nazca does not yet have a central bus terminal. Many bus companies have their offices in the northwest part of town, near the roundabout 6-7 blocks from the Nazca’s Plaza de Armas.

Overnight buses connect to Cusco (14 hours), Arequipa (9 hours), and Lima (via Paracas and Ica) (6-8 hours). Peru Hop is a bus company geared to travelers and offers hop on hop off service to major destinations in southern Peru (between Lima to Cusco) and includes a stop at the Nazca viewing tower.

For travel between Ica and Nazca (2-3 hours trip), small buses (colectivos in Spanish) depart regularly throughout the day.

Nazca is a small town. The Plaza de Armas is walking distance from most hotels. If you need a taxi from one end of town to the other, the fare should be about 3 soles. But be sure to negotiate beforehand.

Nazca and the Ica region are fairly safe for travelers. Take normal precautions with your belongings. The biggest “threats” are the touts in front of the bus station who are always looking to arrange hotels and tours at exorbitant prices. It’s best not to deal with them at all.

When To Visit Nazca

In Peru, Nazca is known as the “city of eternal summer.” As such, it’s a year round destination for travelers intent on getting a glimpse of the enigmatic Nazca Lines. High season is from December to March (summer in the southern hemisphere).

Are there direct flights from Lima to Nazca?

No, but you neither do you have to go all the way to Nazca city to see the geoglyphs. Nazca Lines tours depart from small airports in Pisco and Ica as well as Nazca. If you prefer to go to Nazca city, the only way to get there is to travel by bus from Lima via Paracas and Ica.

When is the best time for flights over the Nazca Lines?

Flights over the Nazca Lines operate from 7 am to 4 pm daily. Usually, wind condition and visibility are better in the morning.

Are safety issues a concern for Nazca flights?

A series of crashes and emergency landings in 2008-2009 prompted a governmental crackdown on aviation safety standards for Nazca Lines flights. In February 2010, all planes were inspected and only those found in compliance were allowed to continue flying. Since then, Nazca tour operators have updated airplanes and equipment, safety regulations are better enforced, and crashes have decreased significantly.