Discover the rise, transformation, and influence of Peruvian chicha music from the 1960s to today. 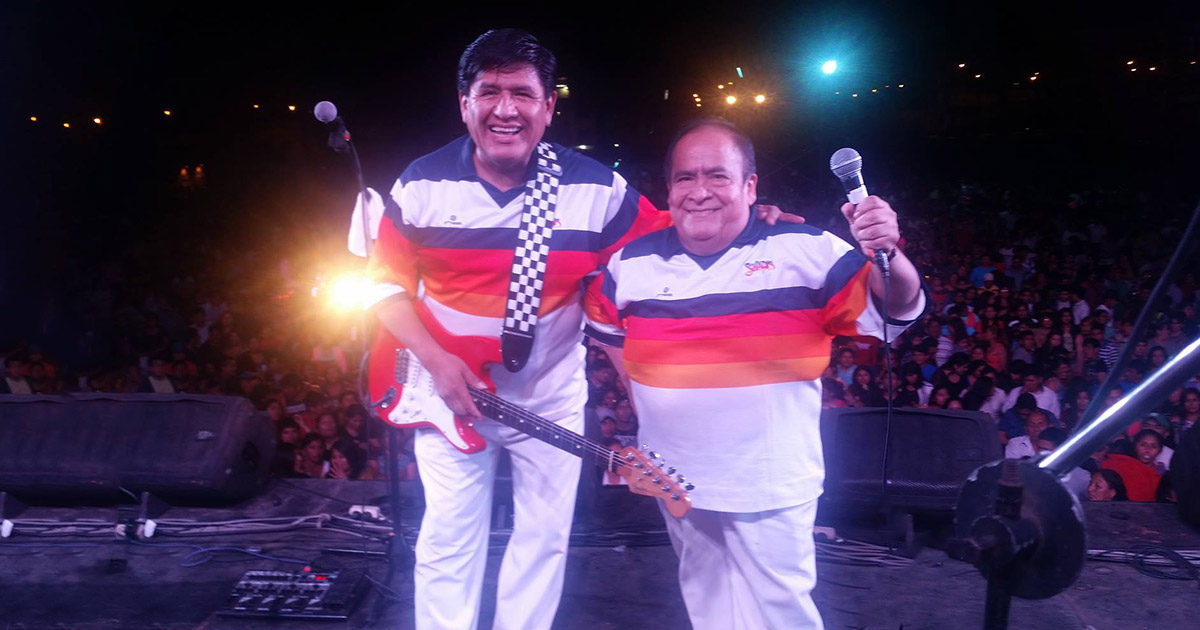 Chicha music, also known as Peruvian cumbia, fuses the tropical sounds of cumbia with the traditional Andean sounds of huayno. Additional influences from international genres such as surf and psychedelic rock, salsa, and even techno give Chicha a distinct sound.

Chicha music was born in Lima at the end of the 1960s. Following mass migration from the provinces, Chicha touched on the hardships faced by the migrant workers. Pulling influences from the three distinct regions of Peru: the coast, the mountains, and the jungle, Chicha music came to represent Peruvian culture as a whole.


History of Huayno and its Influence on Chicha Music

To address the topic of chicha in Peru, we need to begin with huayno. This pre-Hispanic music originated in the Peruvian Andes. It “represents a whole musical universe, poetic and symbolic, with more than 500 years of history of transformation, fusion, and assimilation” (Ferrier 2010). Before and after the Spanish colonization, the cultures that lived in the Andes shared many traditions, including music.

Until the early 1900s, Andean huayno music was exclusively produced and consumed in the Andean region. However, from the 1950s to the 1980s, the Peruvian cultural landscape transformed. Many people from the mountains and jungle moved to the cities on the coast. This wave of migration took place due to the lack of economic opportunity. At the time, and some would argue to this day, Lima and the coastal region centralized economic opportunity. Migrants arrived at the capital and other major cities bringing their traditions with them.

In the 1950s, the scale of people migrating was already increasing, and the process of adaptation and inclusion of these new city dwellers showed many issues. Coastal cities were not prepared to host all the migrants. Unemployment and lack of proper housing were the first problems to arise.

Amidst the difficulties, “music was one of the cultural manifestations that could still express their identity, regional nostalgia, and their resistance to full cultural integration into urban life and values” (Romero 2002). El Jilguero del Huascarán with his hits “Verdades que amargan” and “El viajero,” or the bands Flor Pucarina, Pastorita Huaracina, Picaflor de los Andes, etc. are examples of the regional nostalgia expressed in music during this period. 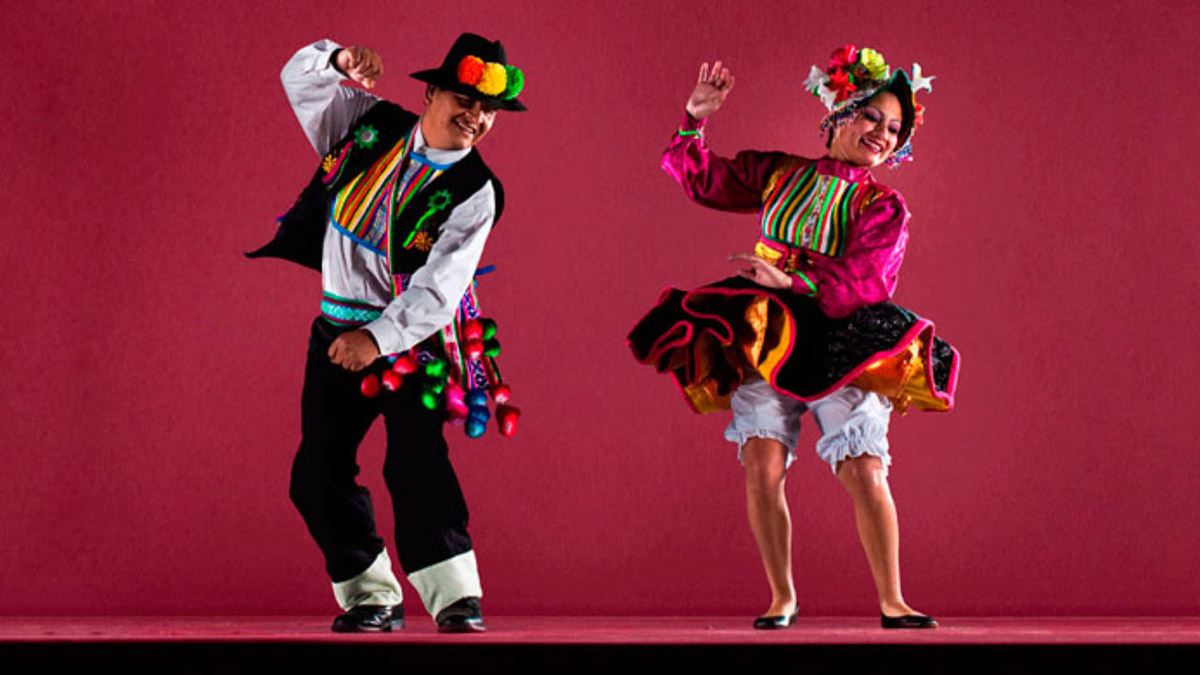 History of Cumbia and its Influence on Chicha Music

Cumbia is a music genre found throughout Latin America. Its roots originate in Colombia, but transcended borders quickly. Cumbia music is a hybrid of instruments and rhythms brought by African slaves, music from natives of Northern South America and the influence of Europeans living in the territory.

Colombia was the first country to popularize cumbia in the 1940s, but Peru was the country where it was reborn. In the 1950s huayno was Peru’s shining star. Cumbia arrived one decade later, and quickly gained popularity throughout the country.

The national recording industry established in Colombia in the 1950s allowed records to be disseminated beyond its borders. These recordings traveled to Mexico, Chile, Argentina, and Peru, among others. Large orchestras of Lucho Bermudez and Pacho Galan were some of the first major players in the spread of cumbia. As cumbia evolved to include new instruments like accordions alongside the classic brass, groups like Los Corraleros de Majagual also gained international acclaim.

Peruvian artists adopted the sound and melody of cumbia, to reinvent the often melancholic huayno in an upbeat way. Even though cumbia was born in Colombia, every 10 or 15 years it is reborn in Peru. 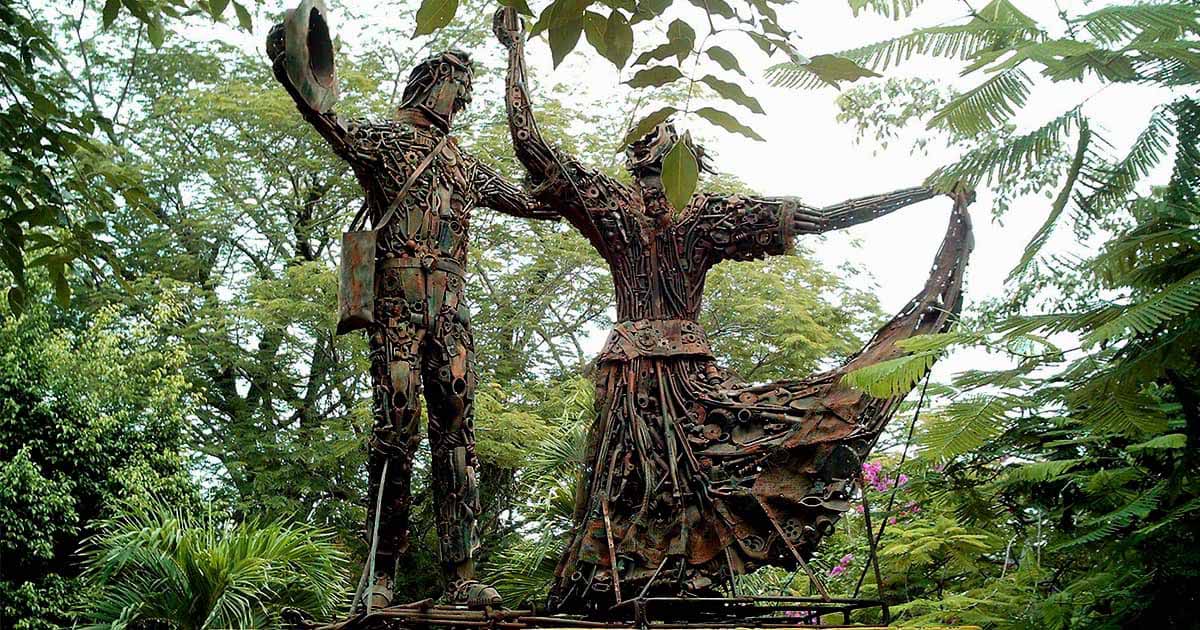 During the 1960s and 1970s, cumbia was at its peak, but huayno didn’t disappear. Instead, it was gaining renewed momentum from a new wave of migrants. It was during this period that huayno and Peruvian cumbia were established as the genres of the working class, the migrants, and the periphery. Many bands began mixing these styles, and after a short period, chicha music was born.

Chicha typically refers to a corn beverage found in the Peruvian Andes. Following the popularity of its first great hit, “La Chichera”, this new genre also claimed the name “Chicha”.

Peru revolutionized cumbia and huayno. Bands mixed elements from huayno into cumbia-predominant rhythms and vice versa. Chicha adopts the melody of cumbia and the vocals and performances of huayno. At the beginning, most chicha songs adapted huayno into cumbia, charged with nostalgic lyrics talking about the difficulties of migrants living in the city.

Under the Velasco military government (1968-1975), strong regulations were in place against Anglo/American pop and rock. The guitar heavy, psychedelic Peruvian cumbia gained popularity as global hits were pushed underground. With the electric guitar as its predominant instrument, chicha became Peru’s own version of rock and roll.

In the 1980s, Chicha was the migrants’ anthem, especially for second generation migrants. This generation found a new way to express their story and identity in the sound and lyrics of Chicha. 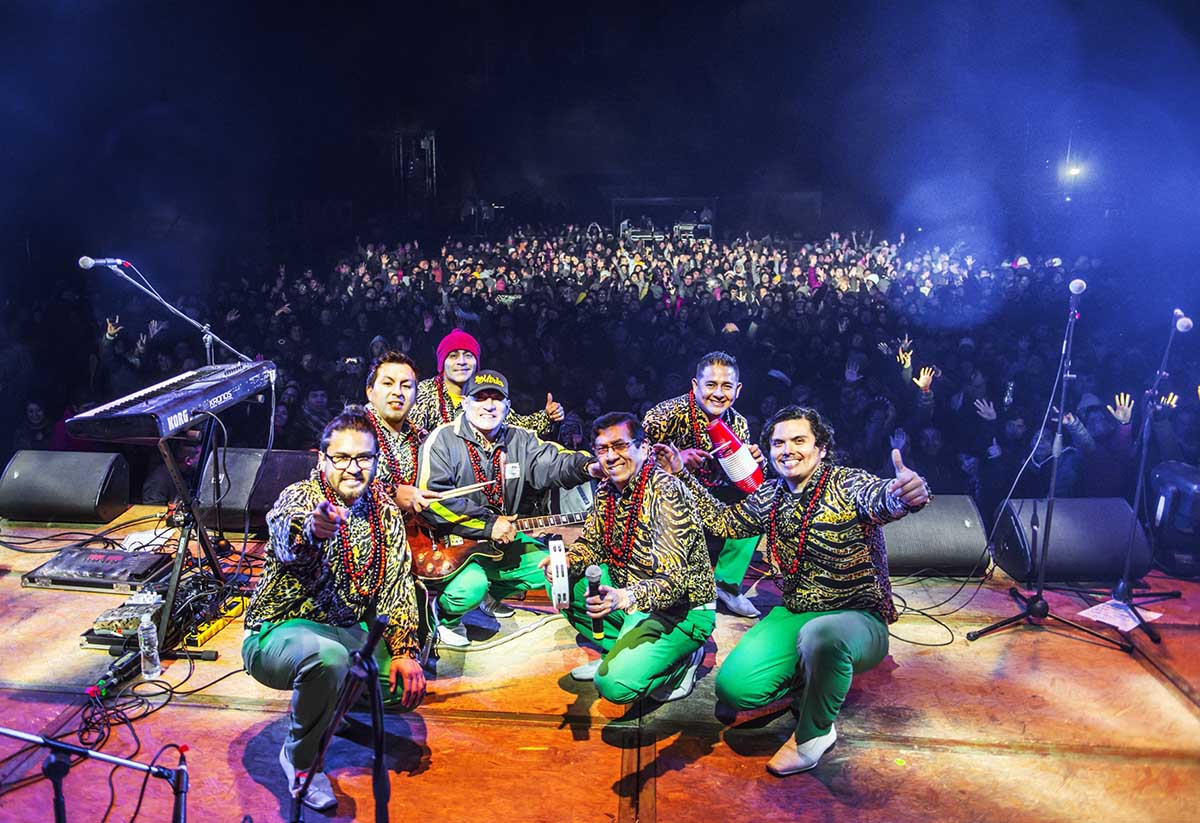 Los Mirlos in Concert. Photo by Los Mirlos on Facebook.

The Pharaoh of Chicha: Chacalón

Chacalon’s lyrics and performance disrupted Chicha’s scene. He renewed the genre with his performances, singing heartbreaking songs such as “Por ella la botella” or “Ven mi amor.” Chacalón created a new kind of chicha concert. Massive consumption of alcohol, loud singing and longing from broken hearts were crucial parts of the experience.

Dubbed “The Pharaoh of Chicha” by his fans, Chacalon had a key role in popularizing chicha across Peru. Chicha was very successful at the beginning of the 1990s. This same decade, Peru’s Ministry of Culture recognized chicha as a valid art form.

However, after the death of Chacalón in 1994 and other social transformations in Peru, a renewal within the genre arrived. Electronic instruments, rhythms and lyrics from the Amazon added new sounds and stories to Chicha. 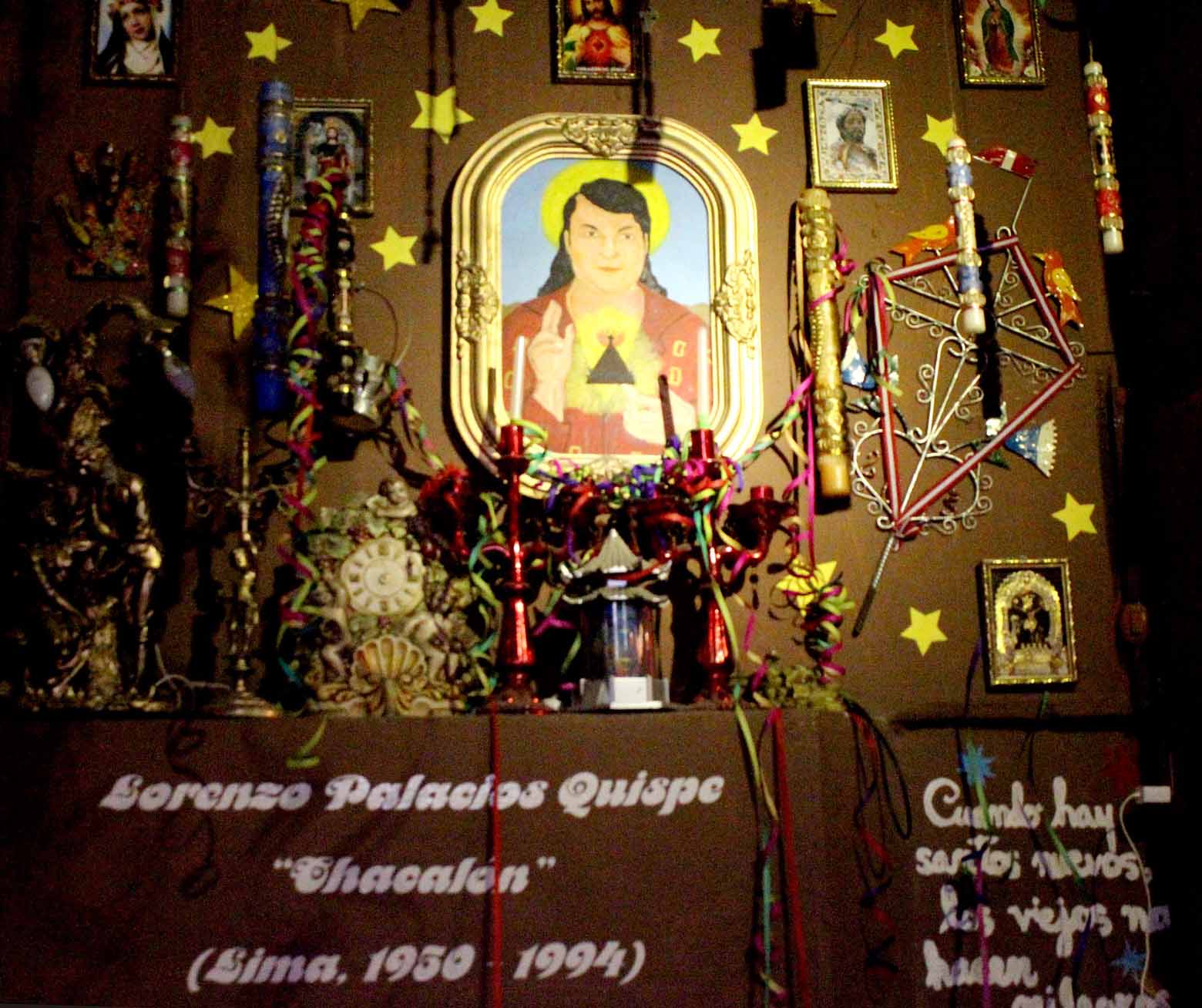 While Chacalón was a key figure in Chicha, many other artists and bands were a part of the Chicha movement.

“The look of chicha is credited to Los Shapis, an ’80s band, which wore brightly colored outfits inspired by embroidery from their native Huancayo region. Other groups loved the look. And bands began working with street artists to create posters that captured their essence and style with neon-bright colors and big letters” (Yang 2015).

Groups like Los Mirlos from Moyobamba and Juaneco y su Combo from Pucallpa were key figures in bringing an Amazonian influence into chicha. Many of their songs tied in folklore from indigenous groups of the jungle, in contrast to the common Andean themes.

In addition to these figures, other prominent groups worth noting are:

As chicha music grew, a new style of art grew alongside it. The bright colors traditionally found in indigenous textiles were embraced to advertise for chicha concerts. “First posters advertising concerts, then murals with a message” (Yang 2015). The bold colors pay homage to the Andean roots that pushed chicha music and the migrant identity in Lima forward.

Monky is an artist originally from a small district in the Junin department. Starting at 18 years old, he became a prominent figure of chicha art through his advertisements for chicha musicians. The round, bold lettering embraces the bright colors found on indigenous textiles. Similar to Elliot Tupac, he primarily uses fuchsia, orange, yellow, and green. He places his posters in busy, public spaces not only to advertise, but also to raise awareness for chicha.

Elliot Tupac is known for striking murals of a word or phrase. He fills bold, bubble-like cursive lettering with bright neon gradients. Fuchsia, orange, yellow, and green characterize the majority of his art. The bright lettering pops against a black background or outline. His murals can span the side of a building or an entire block. Whether it be an advertisement for a business or a mural on the street, Elliot Tupac’s work always has a deeper socio-political meaning.

Today, you can see examples of chicha art on the walls of restaurants, bars, shopping centers, and hotels. People carry bags and wear clothing with designs from Elliot Tupac, Monky, or other chicha artists printed on them. The colors associated with indigenous textiles came to occupy space in Lima through the work of chicha artists and musicians. Take a look at more artists and artwork here. 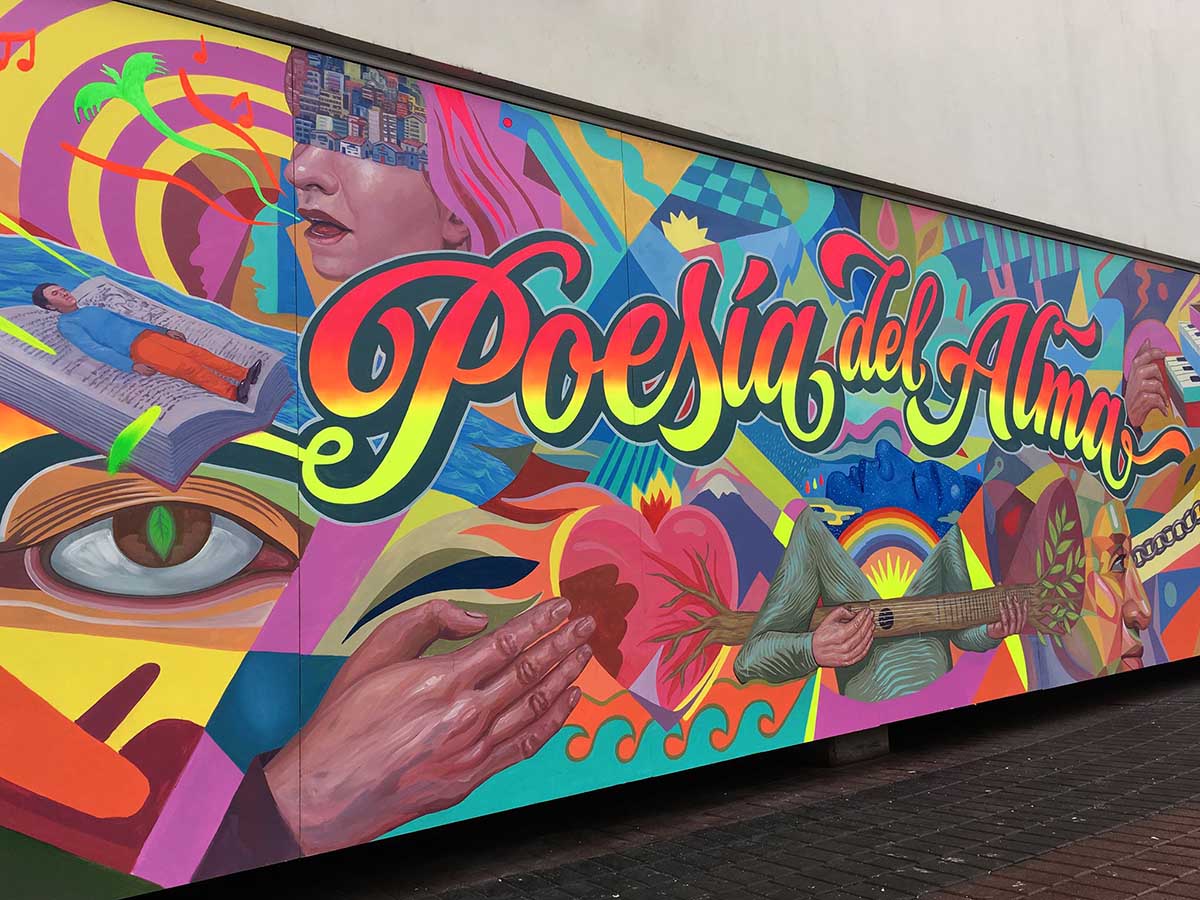 Chicha mural “Poetry of the soul” by Elliot Tupac on Facebook.

Evolution of Chicha Music in Peru

Tecnocumbia conquered the Peruvian art scene without regard to the different economic and social classes in Peru. Mixing techno sounds into chicha, it was the first chicha form that was appreciated across the whole country. It transcended social, economic and political divides. The most notable singer of this era was Rossy War, with her greatest hit, “Nunca pensé llorar.”

Staying true to the trend of new rhythms, tecnocumbia was soon upstaged by a Cumbia Del Norte. Bands like Armonía 10 and Agua Marina were popular in the north of Peru and they soon became famous nationwide. These groups introduced wind instruments and shifted away from the Andean influence. Cumbia Del Norte invaded Lima with much success. Bands like Grupo 5, Los Caribeños, Hermanos Yaipén, Tony Rosado, Mallanep and Corazón Serrano took over the chicha scene.

Finally, alongside Cumbia Del Norte’s boom, other projects began to form. In 2006, New York based label Barbès Records released the album: “The Roots of Chicha”. This production helped spread chicha to an international audience, finding success in North America and Europe. The album is a compilation of chicha songs from various artists from the 1960s and 1970s. In 2010, the same label released the second volume of “The Roots of Chicha 2,” equally as successful as the first. Besides this album, other projects have showcased old Peruvian cumbia, for example, “Chicha Libre.” 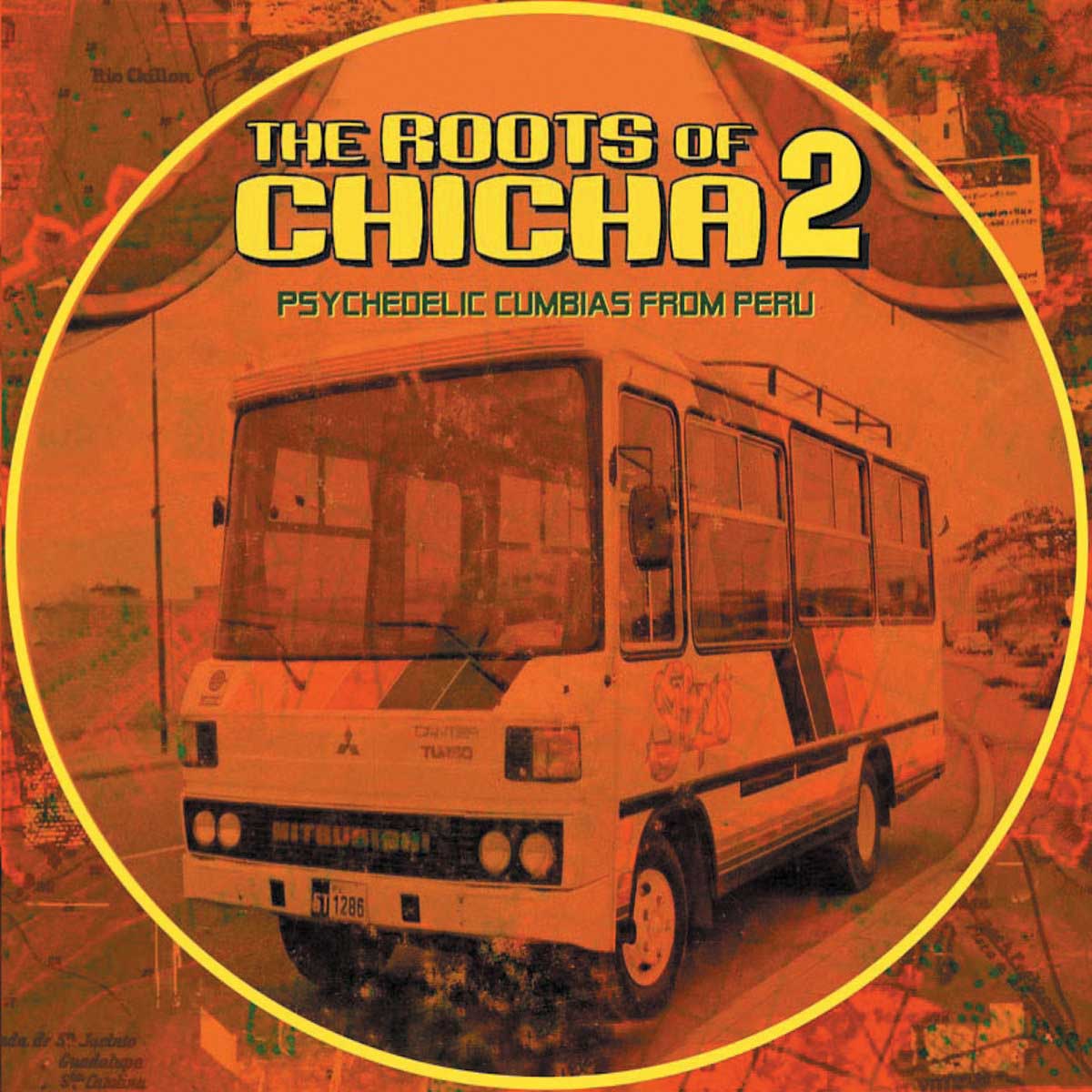 The Roots of Chicha 2. Photo by Barbès Records on bandcamp.

Over the years, chicha extended its reach and people began to describe other art expressions as chicha. For example, dancing, painting, and architecture can now be labeled “Chicha.” In essence, chicha has come to mean combining the traditional with the modern, the rural with the urban.

Today, you can find chicha music and art in every district of Lima, from the outskirts of San Juan de Lurigancho to the colorful and centric Miraflores. Chicha has spread to every region across the country bridging divides in class, status, gender and age. 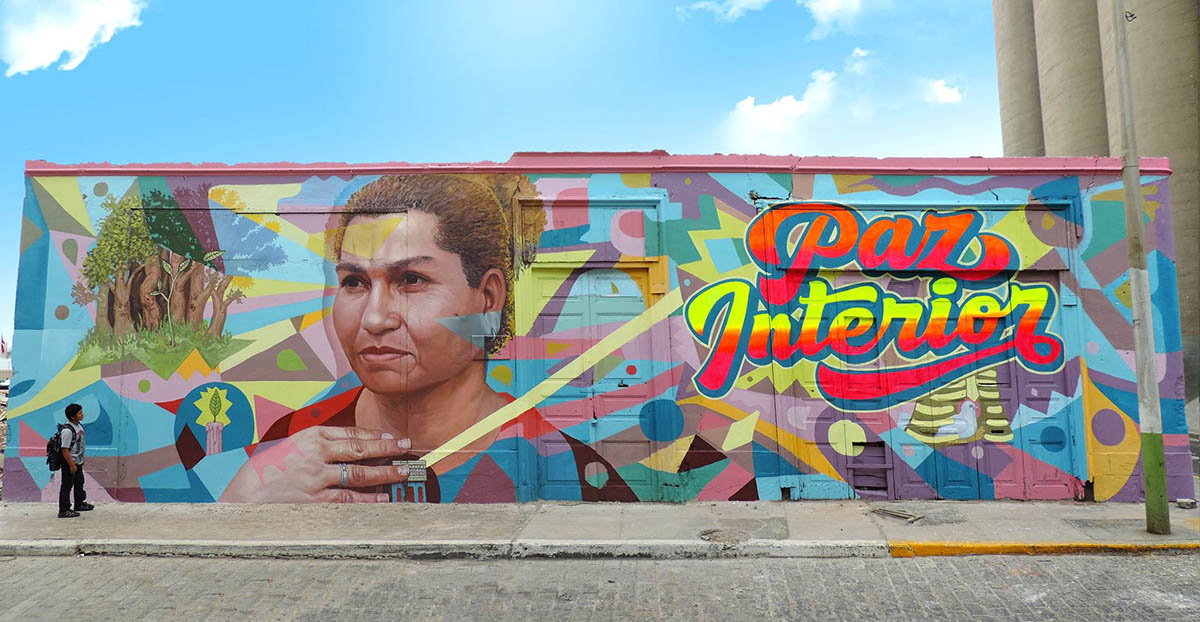 For further reading, check out the book”The ‘Young Towns’ of Lima: Aspects of Urbanization in Peru” (1980) by Peter Lloyd. 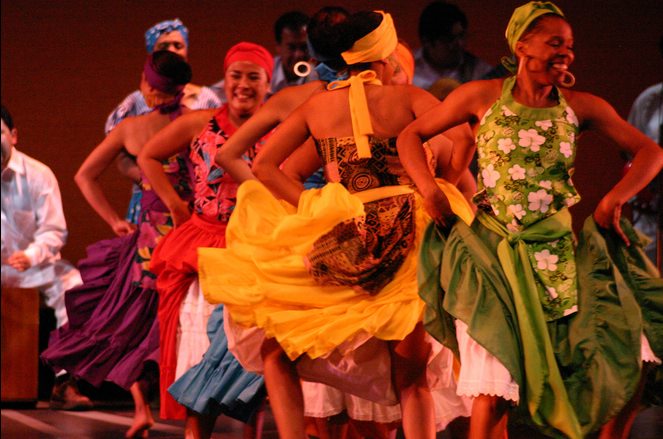 Learn more about a music genre with a traditional Peruvian tune and catchy African beat.

END_OF_DOCUMENT_TOKEN_TO_BE_REPLACED 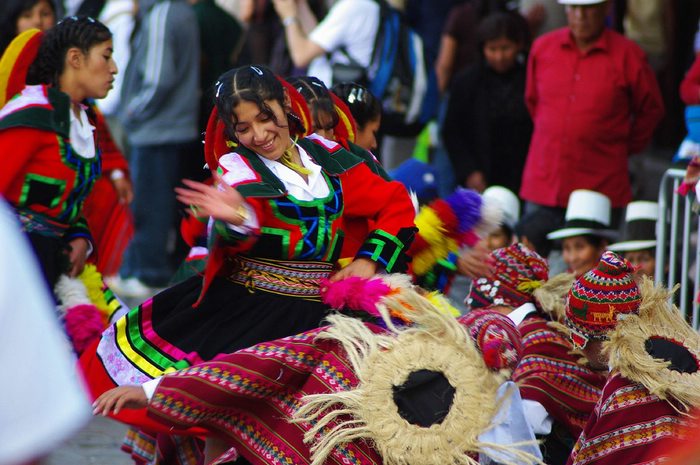