Peru's ancient treasures in the northern cities of Chiclayo and Trujillo rival those of any archaeological site in the Americas. 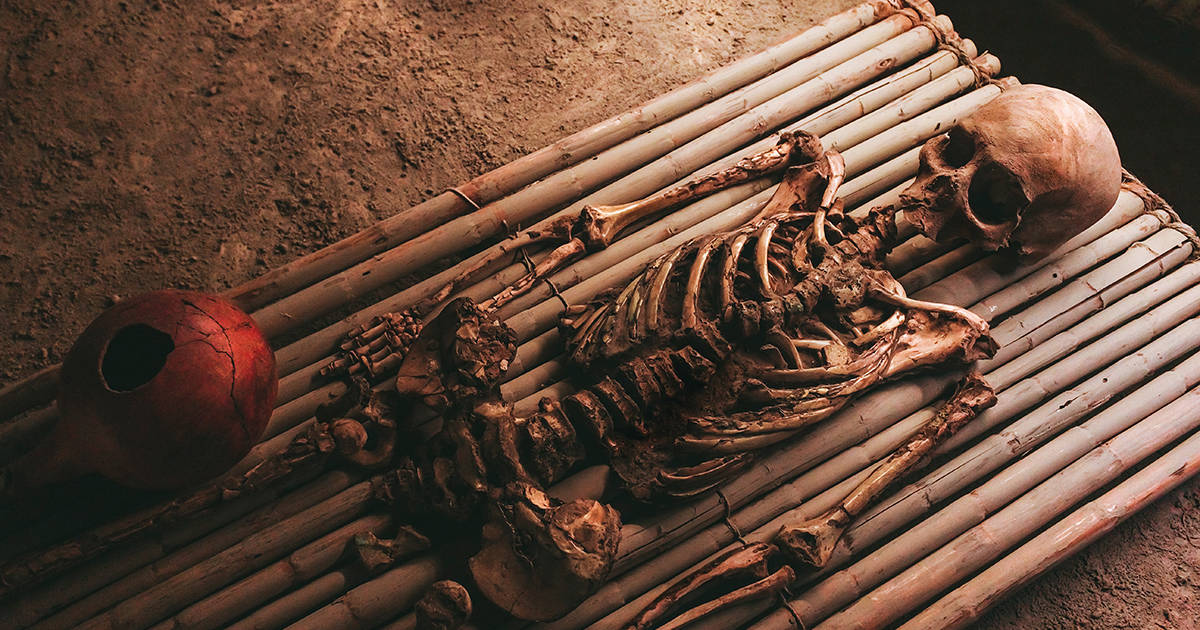 A skeleton and a ceramic pot at the Royal Tombs of Sipan Museum in northern Peru. Photo by Giancarlo Revolledo on Unsplash.

The cities of Chiclayo and Trujillo boast marvelous ancient treasures that rival those of any archaeological site in the Americas. Located on the northern coast of Peru, the two cities are historically extraordinary for the number of advanced pre-Inca cultures that blossomed in the region, including the Wari, Moche, Sicán, and Chimu. None of these civilizations developed writing systems, but they did leave behind evidence of magnificent material cultures.

Machu Picchu gets all the fame as the top Peru vacation destination for archaeology lovers, but Chan Chan in Trujillo and Sipán in Chiclayo stand out among the ancient wonders of Peru.

In 1987, the treasure-filled tomb of an ancient man now known as the Lord of Sipán was discovered intact. Excavating beneath an eroded pyramid structure, archaeologists began to unearth an unprecedented wealth of material artifacts, including masks, pottery, textiles, jewelry and figurines worked in gold and silver.

The exhilarated scientists dug further and made a most striking find: a sarcophagus containing the skeletal remains decked out in a gold headdress, gold mask, necklaces, shields, and other ornaments. In further testimony to the mummy’s high rank, other skeletons surrounded the main coffin, including those of 2 men, 3 women, a child, a dog, and 2 llamas. Archaeologists have since carbon-dated the tomb to 250 AD and certified its origins in the Moche culture, which inhabited the northern coast of Peru until around 700 AD.

In the context of Peru’s post-Columbian history, the discovery of the undisturbed royal tomb is truly exceptional.  Rapacious Spanish conquistadors, in their quest to conquer the mighty Inca Empire, reaped a wide swath of plunder across modern-day Peru, culminating in the complete sacking of Cusco, the imperial city of the Incas, which was fully stripped of its gold, silver, and other treasures. A similar fate befell most tombs and temples  across Peru, resulting in fabulous wealth for the invading Europeans. And yet, Sipán went undetected, safely buried under mounds of dry dust until its discovery by looters (who clued in the archaeologists) in 1987. 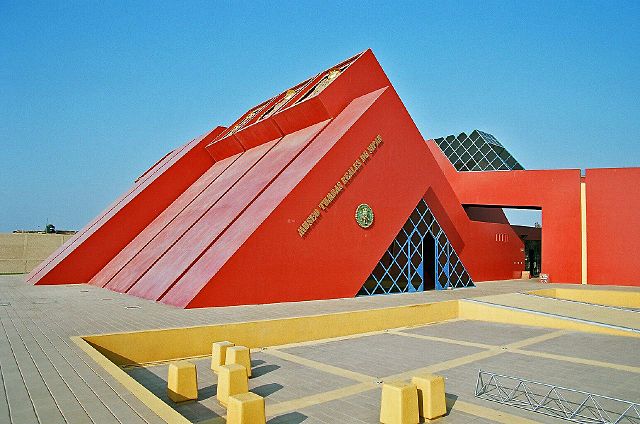 National Geographic has described Sipán as the “richest tomb in the world.” The sheer of treasure it holds and the insights it provides into an ancient culture rivals any similar discovery, including that of King Tut’s pyramid. On a Chiclayo tour, travelers can see the tomb’s treasures at 3 different museums: the Museo de Sitio Huaca Rajada on the actual excavation site; the Museo Tumbas Reales de Sipán which has full reconstructions of the tomb as it was found; and the Brüning Museum, which boasts the “Gold Room”, the largest and finest collection of gold relics in the Americas.

The Adobe City of Chan Chan

Chan Chan is the largest adobe city in pre-Columbian South America. It is regarded by UNESCO as “a masterpiece of town planning” and is a testament to the achievements of the Chimu culture. Covering an area of about 6 square kilometers, the monumental zone of Chan Chan consists of 9 citadels or palaces, as well as additional areas that appear to have been used for industry, agriculture, and water management. In total, about 14 square kilometers of the city have been excavated, but the original city appears to have been much larger. Up to 30,000 residents lived in Chan Chan at its height.

The most distinctive features of Chan Chan are the thick adobe walls that surround and cut through the city, creating a labyrinth of passages that lead to former plazas, temples, ceremonial platforms, storehouses, gardens, orchards, and reservoirs. Some walls retain their original intricate designs, including human and animal shapes and abstract geometric figures. In the “industrial zones,” archaeologists have found evidence of gold and silver-working, weaving, and woodworking.

The Chimu civilization achieved its greatest power early in the 15th century, but the culture was soon after incorporated into the Inca Empire as the Emperor Tupac Yupanqui expanded his dominion from high in the Andes to the desert coastal plains of northwestern Peru.

As a conquered people, the Chimu were understandably resentful of Inca rule and when Spanish conquistadors arrived in the 1530s, the Chimu sided with them against the Inca forces. In the twisted politics of conquest, Spanish soldiers, the supposed allies of the Chimu, ransacked Chan Chan and divided its spoils among themselves. In 1535, the Spanish and the Chimu people established Trujillo, 5km from Chan Chan. The city of Trujillo bears the name of the birthplace of Francisco Pizarro, the Spanish conquistador who commanded the initial destruction of the adobe city and who led the conquest of Peru. 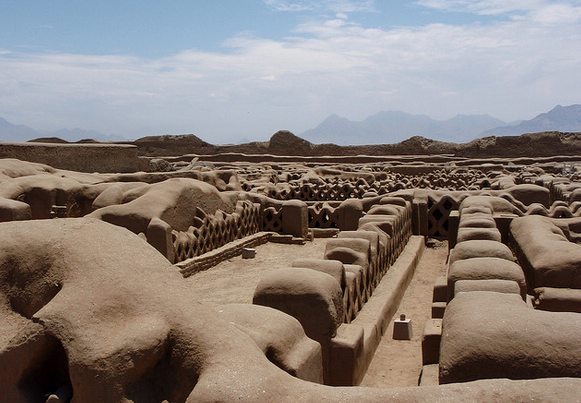 Post-conquest, these ancient adobe walls are in a battle with erosion and other degenerative effects of time.
Photo by Jeremy Thomas/Flickr

In the centuries that followed,  Chan Chan was subjected to further looting by Spanish settlers and their Peruvian descendants. By the time 20th century archaeologists took serious interest in the preservation of the site, all that remained where the city’s adobe walls. Wind, rain, and the passage of time are now the greatest threats to the city – tests which the adobe material has poorly withstood. Today, Chan Chan is on UNESCO’s list of World Heritage Site in danger. Archaeology lovers will not want to miss the opportunity to visit these, some of Peru’s best ancient sites on an archaeological adventure.

Websites and articles:
Museum: The Royal Tomb of Sipan

Video:
Visual tour of  the Royal Tomns of Sipan Museum

Contact an expert travel advisor to begin planning your trip to Trujillo, Chiclayo, and beyond.

END_OF_DOCUMENT_TOKEN_TO_BE_REPLACED 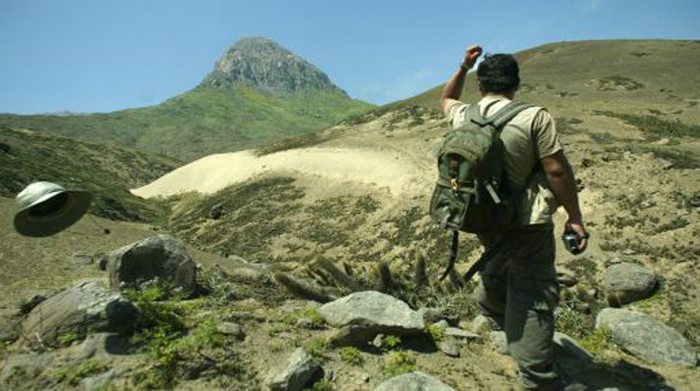 Man of Chan Chan, Protector of the Campana

Meet the man who won’t stop fighting to protect the Chimu/ Mochica Culture and the Cerro Campana.