You’ve heard of the Grand Canyon? This is more than twice as deep. Colca Canyon plunges to a staggering depth of 4,160 meters (13,650 feet).
by Anabel Mota 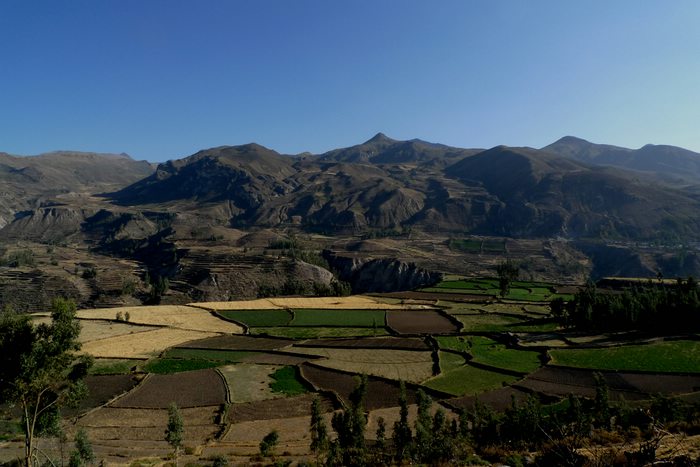 Kelly Hurst, one of LAFL’s superstar Travel Advisors, spent part of her childhood in the mountains of Colorado. So it should come as no surprise that a challenging hike down and back up the Colca Canyon is high on her list of favorite South America travel tales.

First, some cool facts about the Colca Canyon:

-You’ve heard of the Grand Canyon? This one is more than twice as deep. From the highest rim to the river bottom, the Colca Canyon plunges to a staggering depth of 4,160 meters (13,650 feet).

-The canyon has been continually inhabited since well before Inca times. Traditional communities with ancient roots still farm on agricultural terraces and, at higher altitudes, they graze alpaca and other animals.

-Bird fauna include the Andean condor, the Giant Hummingbird, and Chilean Flamingo, as well as mammal species such as the vicuña, guanaco, and vizcacha.

Last May, in the middle of her Peru vacation, Kelly realized she wasn’t going to have time to do the Inca Trail, which is undoubtedly the shining star among Peru treks. Instead, she decided to do an “abbreviated version,” the 2-day Colca Canyon trek, which departs from the city of Arequipa.

It may be abbreviated, but the Colca Canyon trek is just as demanding as any of the other high-altitude treks in Peru. Kelly’s Colca Canyon tour started with an early morning pickup from her Arequipa hotel – 3 a.m. to be exact. The payoff was arrival to the viewpoint known as Cruz del Condor just in time to see the glorious sight of condors taking off from their cliff-side perches to catch the thermal drifts that flow through the canyon. 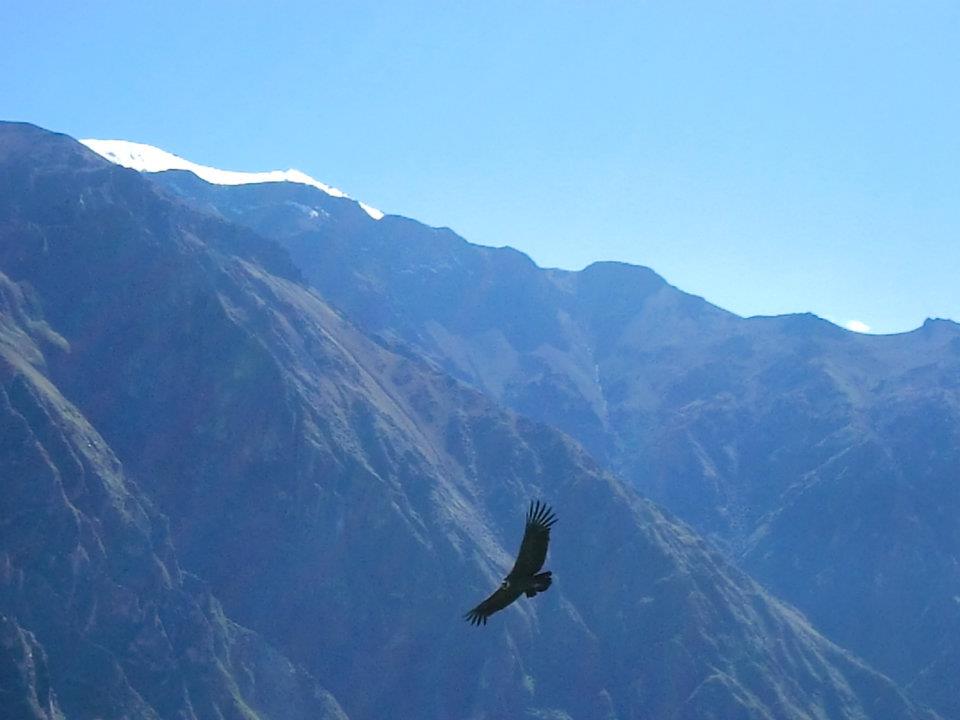 On a perfect morning in the Colca Canyon, Kelly snapped this “lucky shot” of an Andean condor – a great start to an unforgettable Colca Canyon trek.

With that awesome prelude, Kelly’s tour group, consisting of 5 other trekkers plus the guide, began the long climb down from the canyon rim. And contrary to what you might think, going down was just as hard as going up. After 3 hours of pushing their quads to the limit, the trekkers reached the very bottom and then walked a few more miles to reach the campsite. “Everyone was whipped,” she says, “and dreading the 4 a.m. ascent the next day.”

On this trek, an early morning start for the second day’s unrelenting uphill serves to guard against the worst of the daytime heat. Even so, the 3 hour ascent “was exhausting, but seeing the sunrise along the way and enjoying the scenery helped.” 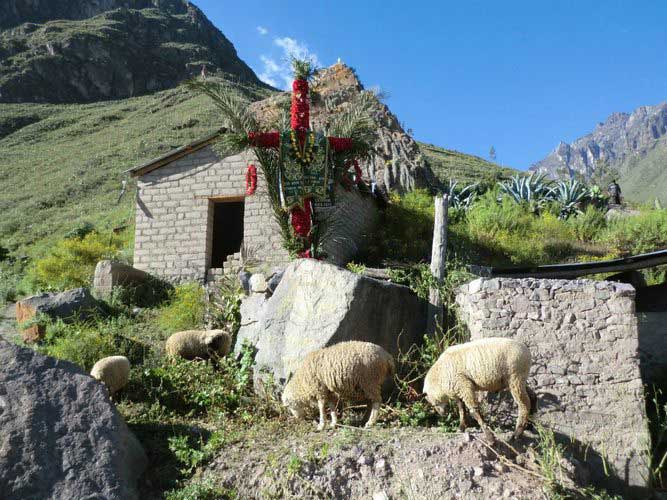 On a perfect morning in the Colca Canyon, Kelly snapped this “lucky shot” of an Andean condor – a great start to an unforgettable Colca Canyon trek.

The most memorable part? Kelly answers, “Making it to the top!” The last few switchbacks were particularly grueling, but Kelly was cheered on by the hardcore trekkers who had already reached the top. “When I finally made it, I sat down and enjoyed the early morning sunshine and a priceless view of the canyon.” 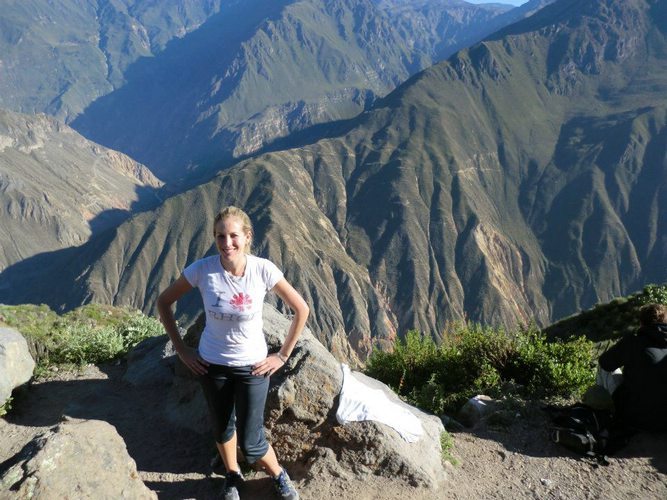 Tired but triumphant, Kelly poses before the gorgeous backdrop of Andean mountains.

After the ascent, the group was transferred by private van to a “much welcomed stop,” the hot springs at La Calera, noted for their restorative properties. They also got to see a bit more of the Canyon before returning to the “White City” of Arequipa.

Does Kelly regret not having done the Inca Trail? Not really. She says, “I still got the feeling of achievement of completing a pretty tough trek, as well as the amazing scenery.” Also, Kelly considers that the Colca Canyon trek is “slightly off the beaten path, which is something that appealed to me.” This trek was “very demanding, but the scenery was so beautiful and rugged, the group was fun, and the guide was knowledge and encouraging. It was a once in a lifetime experience and I didn’t feel like I was missing out by not doing the Inca Trail.”

Kelly has these final bits of advice for travelers considering the Colca Canyon trek:

-If you have time, do the trek in 3 days. You avoid the 3 a.m. pickup, and you get to spend an extra night in the canyon and do the trek at a more relaxed pace.

-If you’re not up for the trek out of the canyon on the last day, there are mules available for hire.

-May is a great month to visit; dry but still green as the rainy season has just recently ended. There were a lot of flowers, which made it even more stunning, and the weather was perfect.

Planning a Peru trekking tour? Kelly Hurst and an entire team of adventure-loving Travel Advisors at Peru For Less are available to assist you. 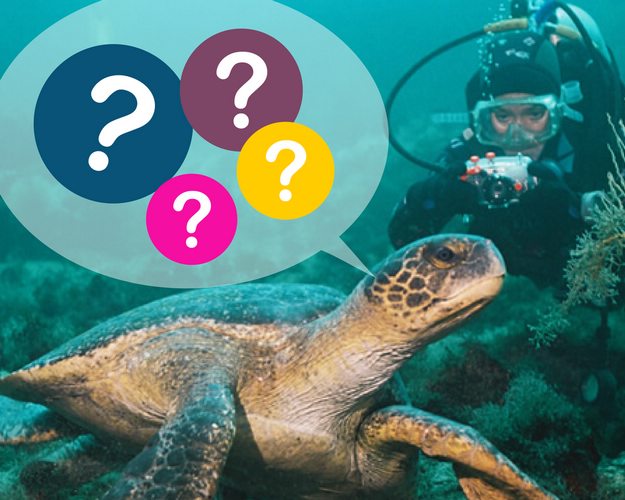 Don’t waste time dragging your feet planning your Galapagos trip. Get started by asking yourself these 4 simple questions!