Discover the natural wonders of Salinas and Aguada Blanca National Reserve with our travel guide. Get the scoop on adventure excursions, where to get the best views, and more. 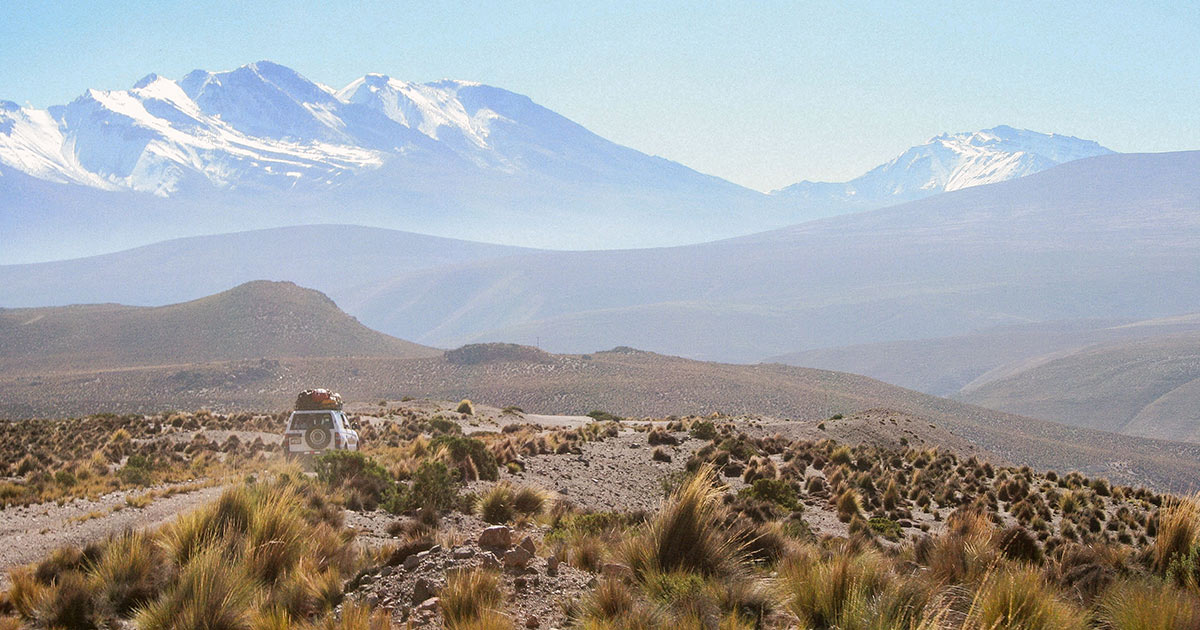 The road from Arequipa to Colca Canyon travels through the Salinas and Aguada Blanca National Reserve (officially known as La Reserva Nacional Salinas y Aguada Blanca) in Peru. It is one of the underrated, yet spectacular destinations in the region, providing vistas of volcanoes, lagoons, wetlands, and unique flora and fauna that thrive in the extremely high elevation environment.

Located northeast of Arequipa and en route to Lake Titicaca, the Salinas and Aguada Blanca National Reserve was created in 1979 to conserve the natural resources and landscapes of this zone. It is a stunning example of the arid Puna environment. The reserve extends over an area of 367,000 hectares and hosts an array of enchanting sights such as lagoons, volcanoes, wetlands, dotted with pre-Inca ruins, and unique wildlife. 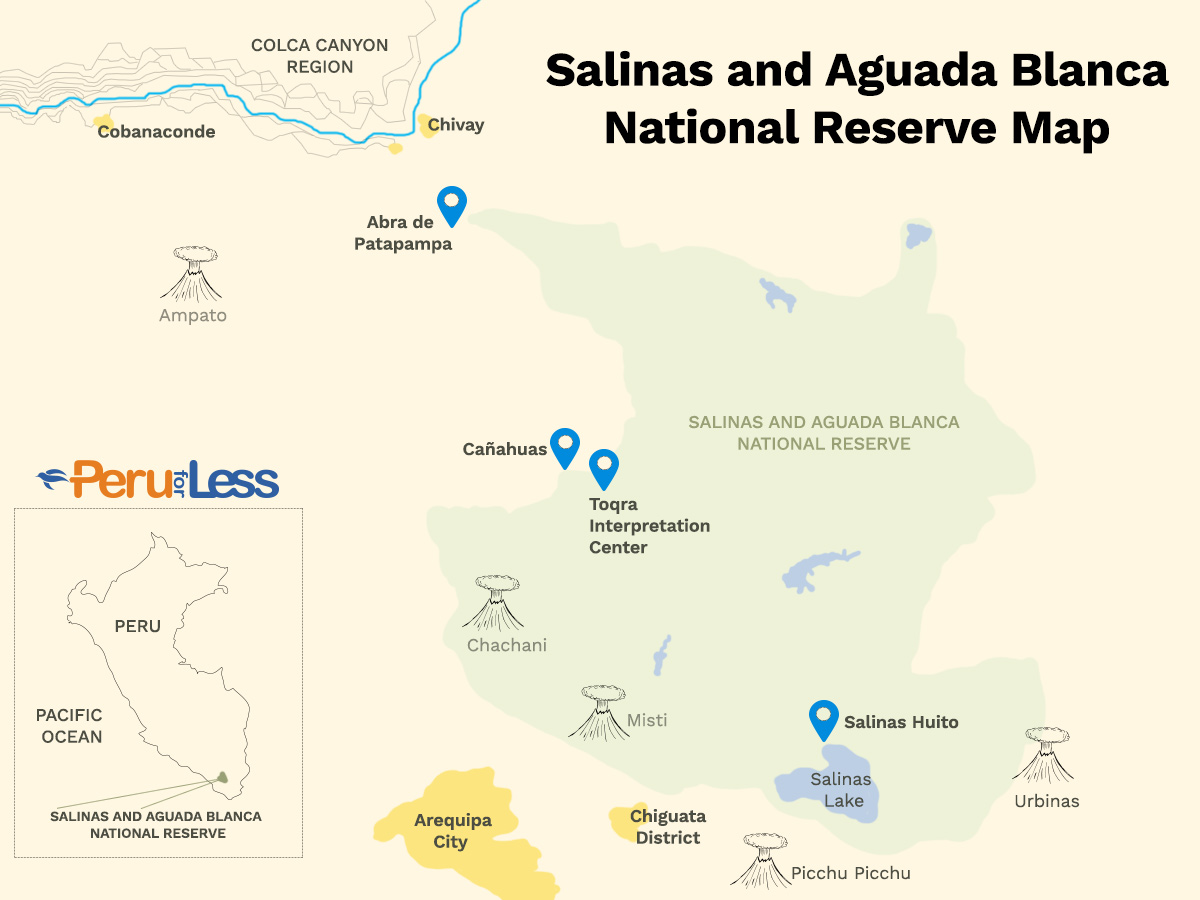 Read more about the highlights, visitor sites, and volcanoes indicated on the map in the Attractions and Things to Do sections below.

Those who intend to extend their visit to the reserve should make sure to be acclimated before attempting any strenuous activity. Read about how to avoid altitude sickness.

The reserve experiences consistently cold weather throughout the year. Average temperatures range between 36°F (2°C) and 46°F (8°C), with drastic drops in temperature at night.

From October to April, high winds called heladas come in from the Bolivian altiplano to the east, bringing rain, snow, and hail, and temperatures down to -20°C (4°F).

The rainy season is from January to March. The dry season from April to December is the best time to visit for ideal road and weather conditions.

Tambo de Cañahuas, 46 mi (75 km) from Arequipa, is the main checkpoint for visitors to the reserve. Around 1,800 vicuñas inhabit the Pampas Cañahuas highlands. During an event called Chaccu, the wild vicuña herds are captured, clipped of their wool, and released. This event provides an alternative to hunters who would otherwise kill the vicuñas for their valuable wool. Approximately 40 lb (18 kg) of wool is collected during the Chaccu. 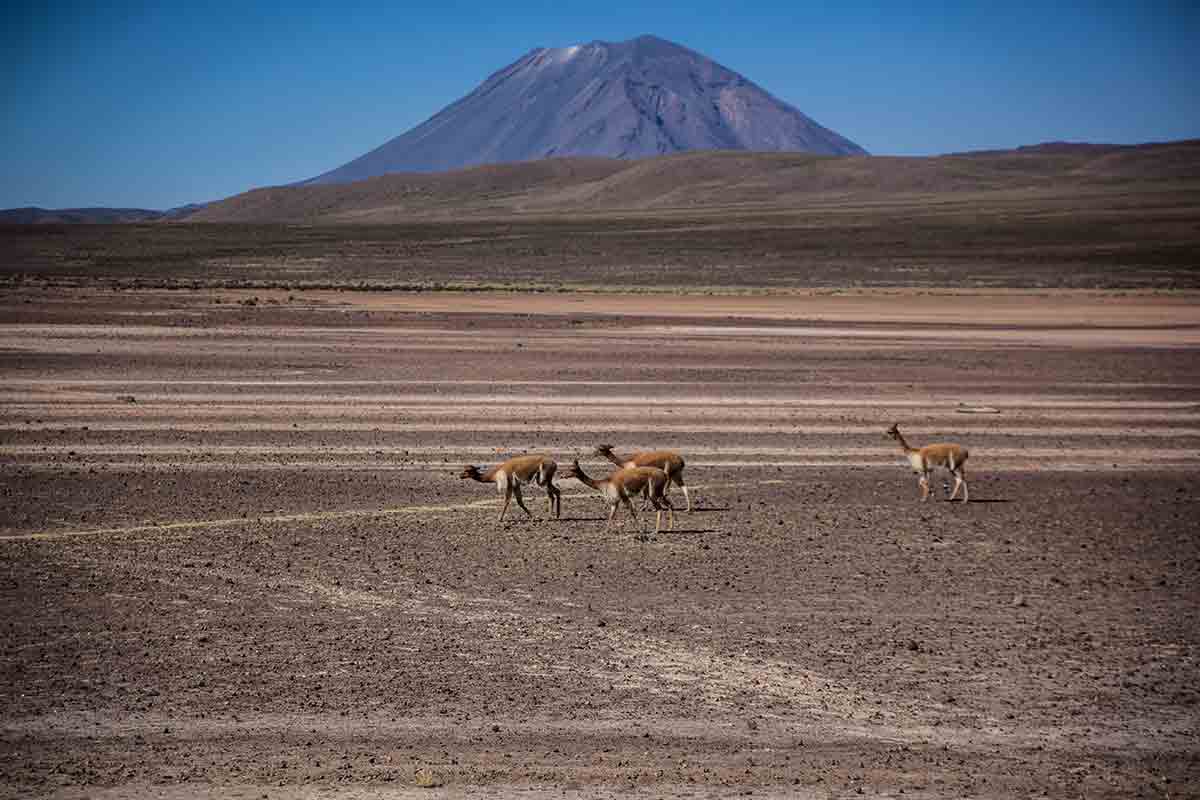 Vicunas roam across the Salinas and Aguada Blanca National Reserve, Peru. Photo by Peru For Less.

The Toqra Interpretation Center (Centro de Interpretacion de Toqra in Spanish) is in Patahuasi. Photographs and scale models at the center show the diverse landscapes of the reserve and the various wild animals and plants that inhabit it. The center also documents the cultural activities of native communities and the history of ancient cultures who have resided here. Outside the center, there is a lookout point with incredible vistas.

The cave paintings at Sumbay are between 6,000 and 8,000 years old. Discovered in 1968 on the backside of Misti Volcano, 55 mi (88 km) from Arequipa at 13,450 ft (4,100 m) above sea level. There are approximately 500 animal figures, including camelids, felines, and Ñandúes, as well as human figures holding weapons or appearing to dance. Archaeologists have also found pre-ceramic artifacts in the vicinity. The caves are part of the Sumbay rock forest and formed from the erosion of volcanic material. Members of the adjacent Sumbay community are in charge of guiding travelers to the caves.

Salinas Lake, or Laguna de Salinas in Spanish is home to a vast number of bird species. The lake sits at 14,110 ft (4,300 m) of elevation and spans over 6,000 hectares. The lake is one of the only places where you can see all three species of highland flamingos – Andean, Chilean, and James’s – as they forage for food in the shallow waters. During the dry season, the water evaporates and leaves behind deposits of sodium chloride that is mined by residents of nearby communities.

The mountain pass at Patapampa is the most breathtaking of the national reserve destinations. Located at 16,110 ft (4,910 m) above sea level, from here, the road begins its 3,940-feet (1,200-meter) descent into the Colca Valley. Mountain biking tours frequently start here and continue to Chivay. Andean saleswomen gather here to sell various crafts to travelers who stop to appreciate the views. 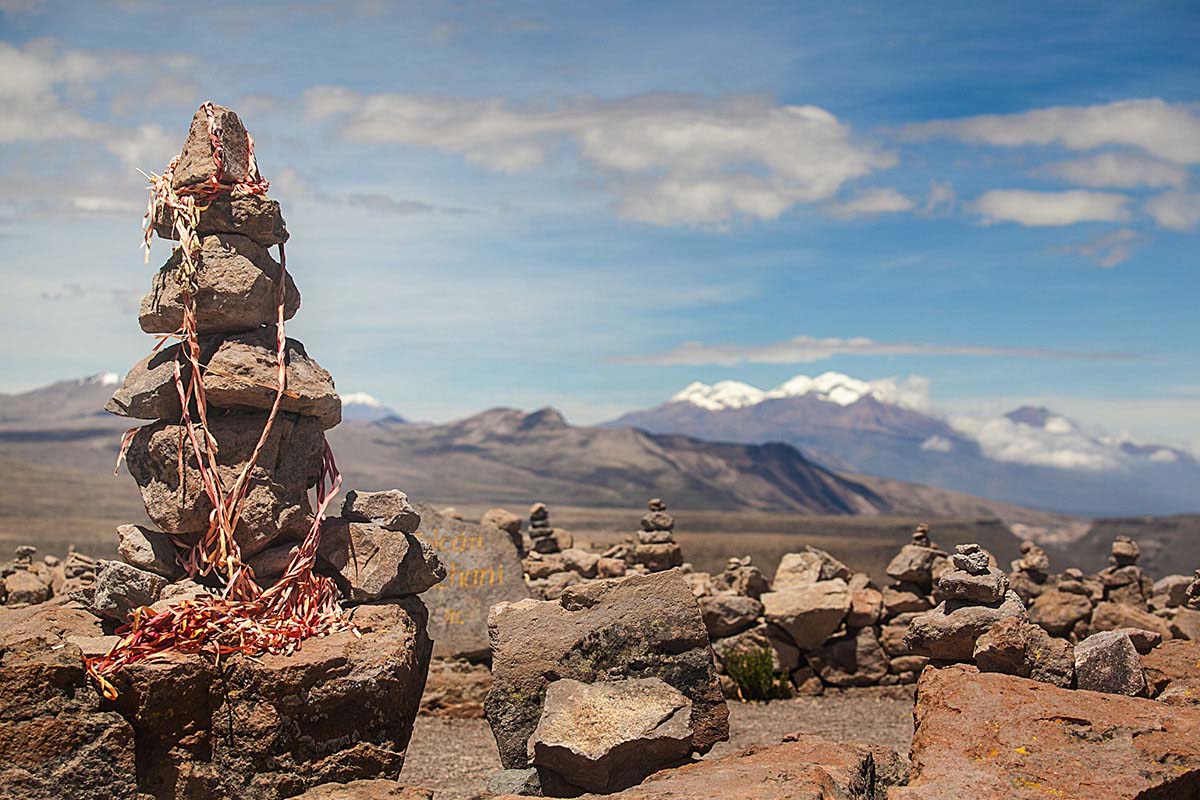 Enjoy the volcano view from Patapampa Pass. Photo by Peru For Less.

Salinas Huito is one of the checkpoints for entry to the Aguada Blanca National Reserve about 2.5 hours (37 mi, or 60 km) from Arequipa. Most of the town residents work as miners at Salinas Lake, extracting salt from family-owned parcels. In recent decades, workers have mined the lagoon for boron, which is then sold to the private company Inkalabor.

On the road between Arequipa and Salinas Lake, Chiguata was once the principal route to access the Misti and Picchu Picchu Volcanoes. Today, the small town of cobblestoned streets preserves traditional stone and adobe houses with straw roofs. Surrounding it are gorgeous terraces and various attractions, including pre-Inca and Inca ruins, petroglyphs, waterfalls, and a small forest of queñua trees. Located 19 mi (30 km) southeast from Arequipa, the Chiguata District sits at an elevation of 9,680 ft (2,950 m) above sea level and experiences cold weather all year.

Standing like guards at the entrance to the Salinas and Aguada Blanca National Reserve, the volcanoes Misti and Chachani flank the main road between Arequipa and Colca Canyon. The volcanic peaks are preludes to the wonders that await further into the reserve. Adventurous, altitude-ready travelers can climb either one of these and a few others in the vicinity. Venerated as apus (mountain spirits) by pre-Inca and Inca cultures as well as by some Peruvians today, the peaks are also sites of ancient burials. 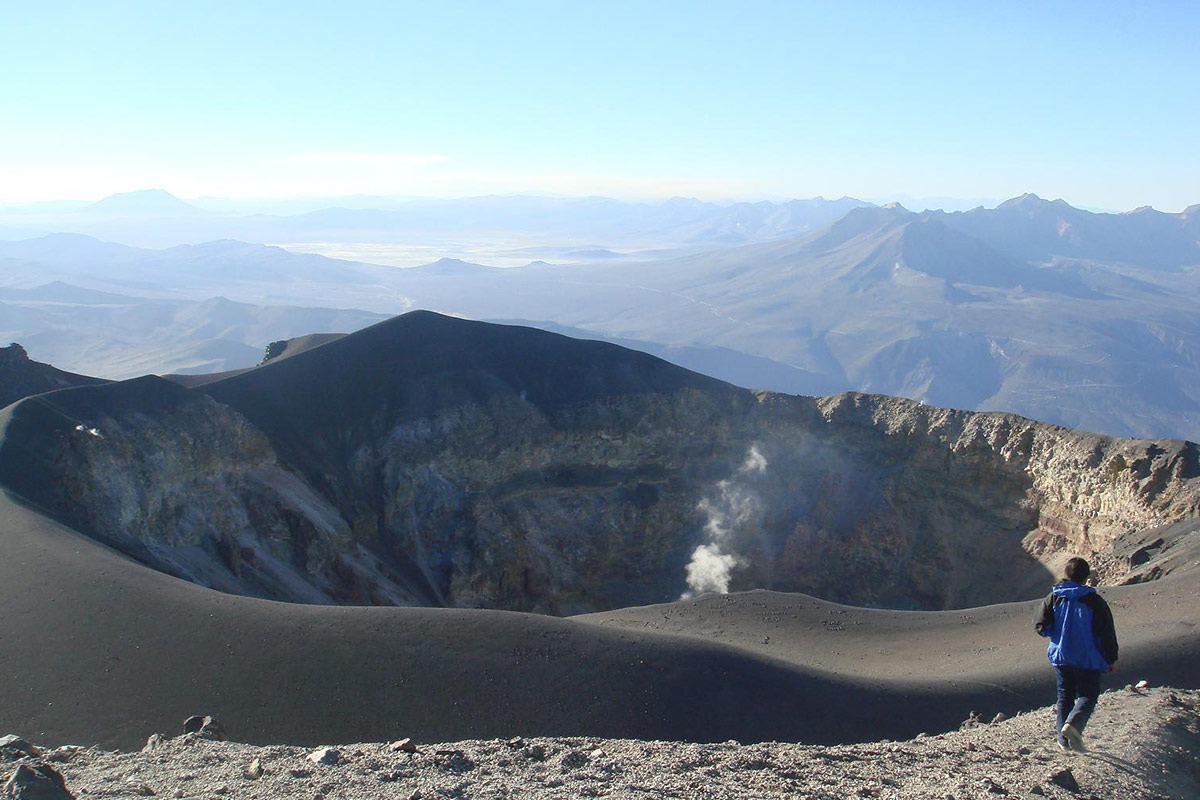 The crater summit of Misti Volcano. Photo (modified for size) by mik_p on Flickr.

Misti (19,098 ft | 5,821 m) is known for its seasonally snow-capped, perfectly symmetrical cone. Six Inca mummies were found in the crater and now stored at the Museo Santuarios Andinos in Arequipa.

Other climbable volcanoes near the reserve:

Ubinas (18,609 ft | 5,672 m) is the most active volcano in Peru, sending up small explosions and frequent ash plumes as recently as 2019. The volcano is on the southeastern border of the reserve. 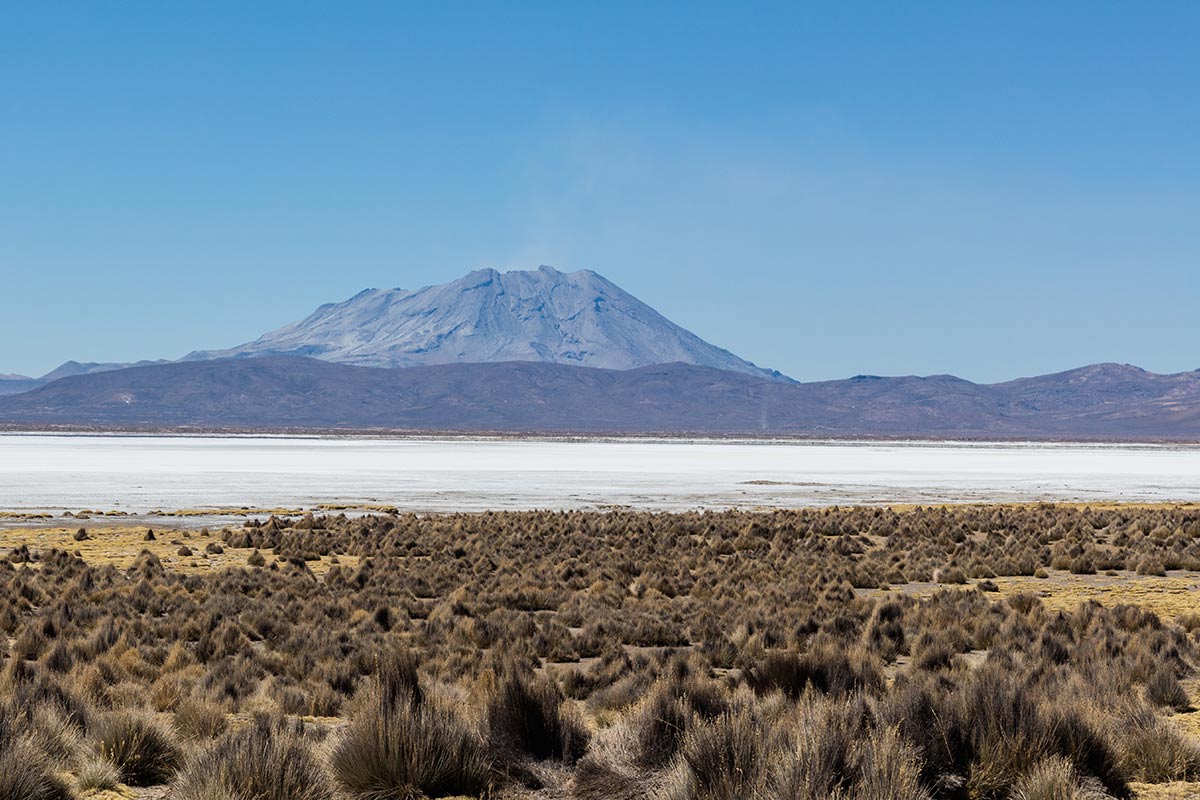 Salinas Lake with Ubinas in the backdrop. Photo (modified for size) by Diego Delso on Flickr.

Coropuna (21,079 ft | 6,425 m) is the largest and highest volcano in Peru, considered to be the site of a significant pre-Columbian temple. Archaeologists have found an Inca trail going up to 18,045 ft (5,500 m), where it disappears under glacial ice.

Solimana (19,990 ft | 6,093 m), also spelled Sulimana, is one of the highest peaks near Coropuna. The volcano can be visited en route to Cotahuasi Canyon.

The reserve brims with unique fauna, but bird watchers especially are in for a real treat while exploring the reserve. The wetlands, called bofedales in Spanish, are home to 44 species of aquatic birds, including 3 species of flamingo, whose population can swell up to 25,000 during the wet season. Other birds include Andean geese, crested ducks, and giant hummingbirds. The Bofedales Pampa Toqra, on the road between Arequipa and Colca, is a popular place to stop.

Read more about birding in Peru.

It looks and feels like a different world at 12,000 ft (3,660 m) above sea level. Sit back in the comfort of your car seat, but keep your eyes open for the rare plants and animals that inhabit this extreme environment.

At Laguna de Salinas, see flocks of parihuana or Andean flamingo. The white chests and vermillion wings of these birds are said to be the inspiration for the Peruvian flag colors. The rolling pampas of the Puna are also inhabited by the guanaco, the largest wild Andean camelid, and the taruca (Andean deer) which is recovering from near extinction.

At the highest areas of the reserve, observe the green yareta, a low dome-shaped shrub that only grows at high elevations. 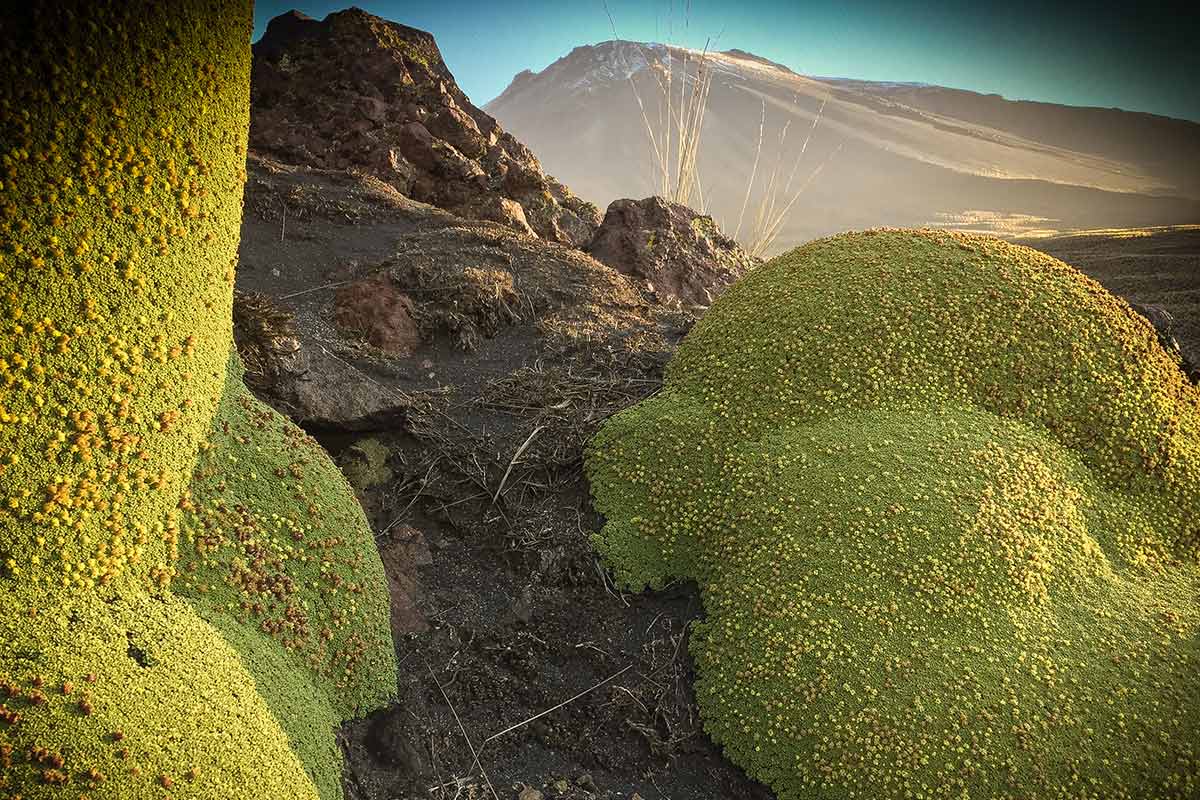 Yereta is an evergreen perennial with tiny pink, purple, and yellow flowers. Photo by Britt Fracolli.

At high elevation, cold temperatures and the lack of oxygen can take their toll. Full-finger gloves and a windbreaker can ease discomfort. Your guide should carry oxygen in case of an emergency. Contact us to book an exciting bike excursion with a reputable adventure tour operator.

Arequipa is located directly over one of the tectonic fractures that have created the Andes over millennia. In between the city and Colca Canyon, there is no shortage of mountains to climb. Misti and Chachani are favorites for their proximity to Arequipa. Coropuna is also popular as the highest of the 21 volcanoes in Peru. There are dozens more nearby worth exploring! 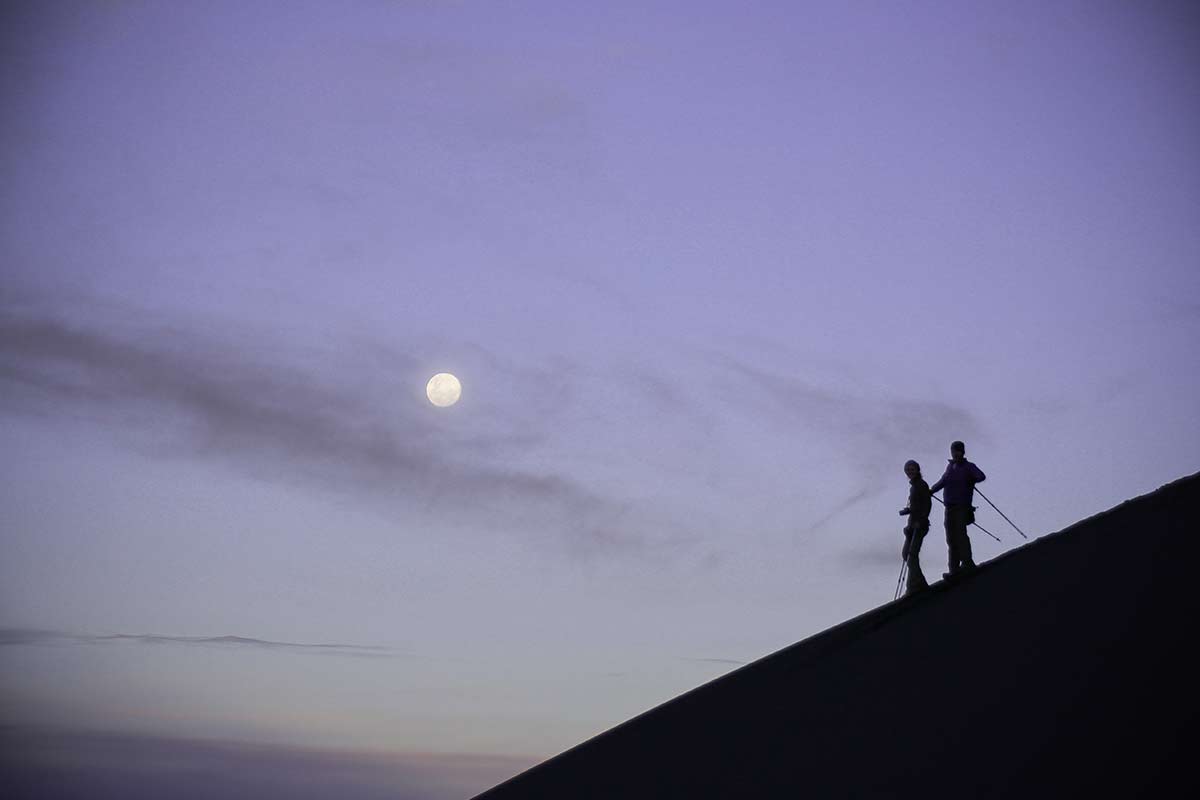 Learn more about guided volcano treks. Contact our team and discuss the best option for your custom Peru itinerary.

Many travelers on a tour transit through the reserve quickly while traveling between Arequipa and Colca Canyon. Departing from Arequipa, it takes three hours to reach the town of Chivay in Colca Valley and around four hours to get to other places further in the canyon. Generally, tours make a few stops in the Salinas and Aguada Blanca National Reserve, which serves a dual purpose; it breaks up the drive time and is a short and sweet introduction to a few of the reserve’s attractions.

From Arequipa, the journey to Colca Canyon begins with a drive northeast towards the volcanoes Chachani and Misti. After about two hours, Pampa Cañahuas is a common tour stop to observe wild vicunas grazing in the open plains. Next, take a small break to enjoy a cup of traditional, altitude-relieving mate de coca tea. The final stop at the Patapampa overlook gives you time to snap photos of the landscape. 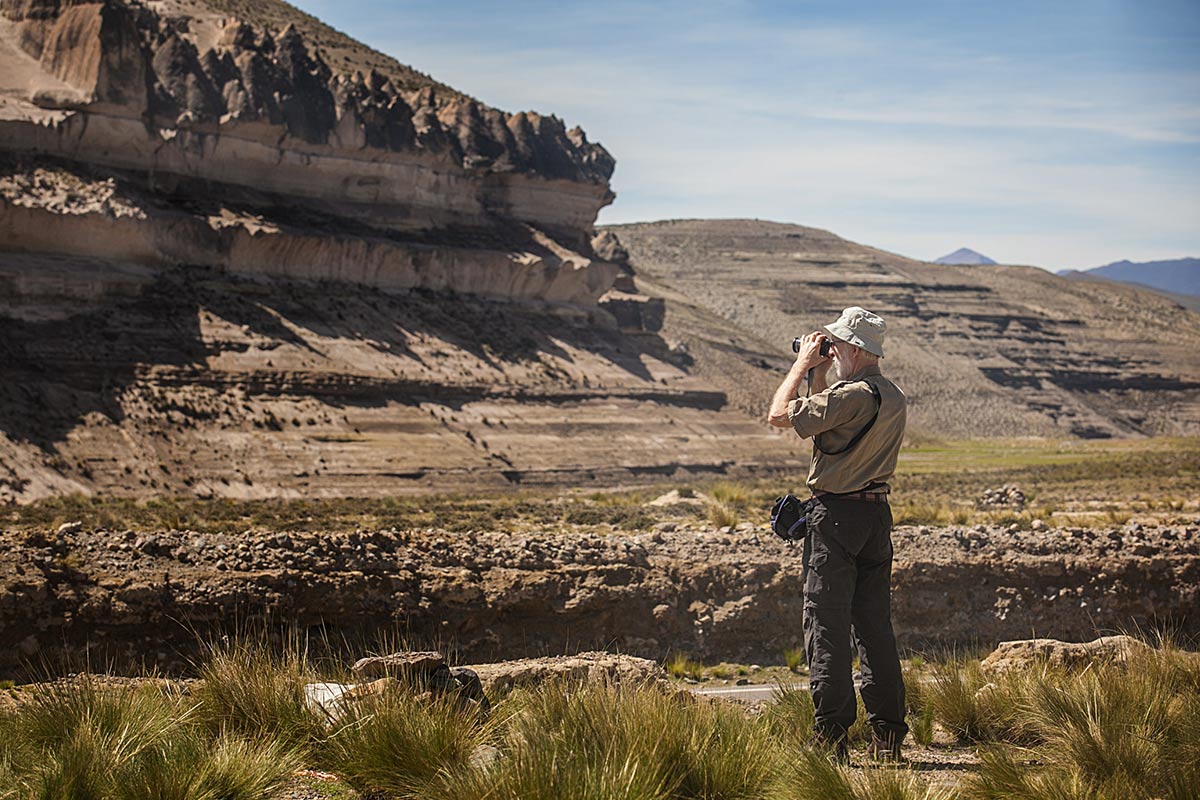 A traveler observes the rock formation in the Salinas and Aguada Blanca National Reserve. Photo by Peru For Less.

If you plan to spend more time exploring the Salinas and Aguada Blanca National Reserve, then look into an outdoor excursion like summiting a volcano or biking.

Overnight accommodation is limited to camping within the national reserve. There are also a variety of comfortable Arequipa hotels and Colca Canyon hotels to base your stay and explore the reserve to your heart’s content by day.

Arequipa to Salinas and Aguada Blanca

The majority of travelers briefly visit attractions within the reserve on a guided tour in transit to Colca Canyon. Independent travelers that set out to do a Colca Canyon trek or experience other canyon highlights can also book a bus tour that also stops at various points in Salinas and Aguada.

Many parts of the national reserve are so isolated that there is no cell reception. Therefore, you will need to hire private transport or rent a car if you want to explore Salinas and Aguada Blanca National Reserve more in-depth and on your timeline. Please read our guide about car rentals in Peru before making your reservation.

Northern Access to Salinas and Aguada Blanca Reserve
The typical route from Arequipa to Colca transits through the northern edge of the reserve. There is a checkpoint at Cañahuas. 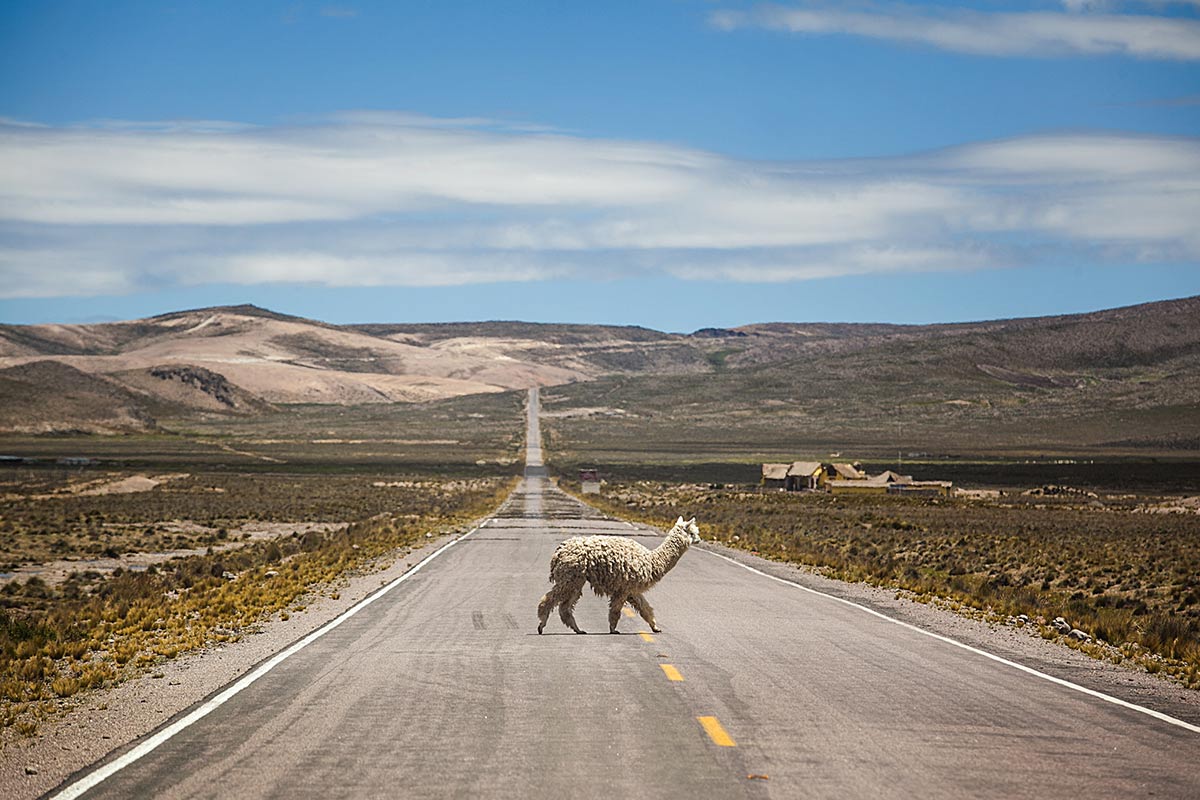 An alpaca crossing the road in the national reserve. Photo by Peru For Less.

The Salinas and Aguada Blanca National Reserve represents the diversity of Peru and is still to be discovered by the masses. Contact our team to maximize your exploration of this stunning region of Peru on a custom itinerary, and don’t forget to read our Arequipa Travel Guide, a beautiful city from which most tours of the reserve depart. 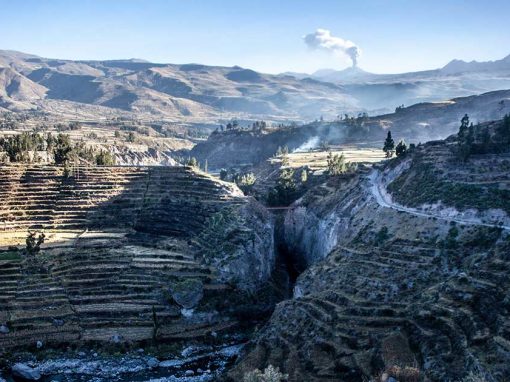 Discover the incredible cultural history of Colca, top attractions, how to get there, and so much more.

END_OF_DOCUMENT_TOKEN_TO_BE_REPLACED 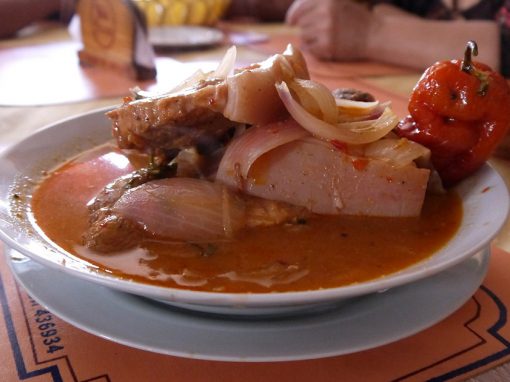