Peruvian Recipe: Flavors of Peru from Our Kitchen

Check out some Peruvian delights served fresh from our LAFL kitchen.
by Britt Fracolli 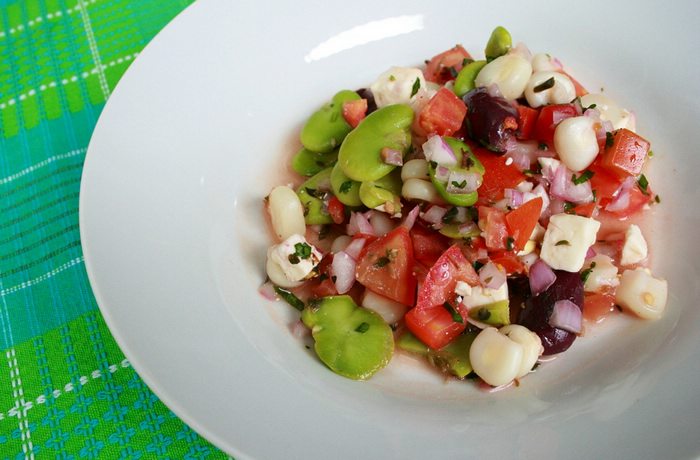 Our Lima-based team is spoiled with the delicious aromas and flavorful meals that come from the office kitchen. Istvan, our friend and awesome chef, keeps us happy and well fed during lunchtime with a variety of international dishes. Last week I observed Istvan in culinary action as he prepared a classic Peruvian lunch for more than 20 people.

Istvan started his culinary masterpiece with the easiest item on the menu – papaya juice, or jugo de papaya. He made the juice first so that it had plenty of time to get cold in the refrigerator while the other food was being prepared.

After peeling and cutting the papaya into small cubes, Istvan mixed the fruit and some hot water in a blender. He used hot water so that the sugar would dissolve easily into the juice. 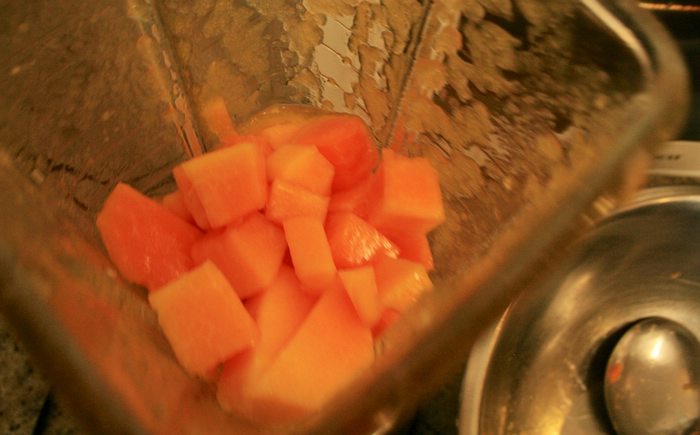 Pouring the papaya juice through a strainer helped remove the access pulp: then he added sugar to taste.

Solterito, likely the most colorful of Peruvian salads, is a healthy blend of vegetables, white cubes of cheese, and lime juice. This salad is served cold and comes from the southern highland city of Arequipa. 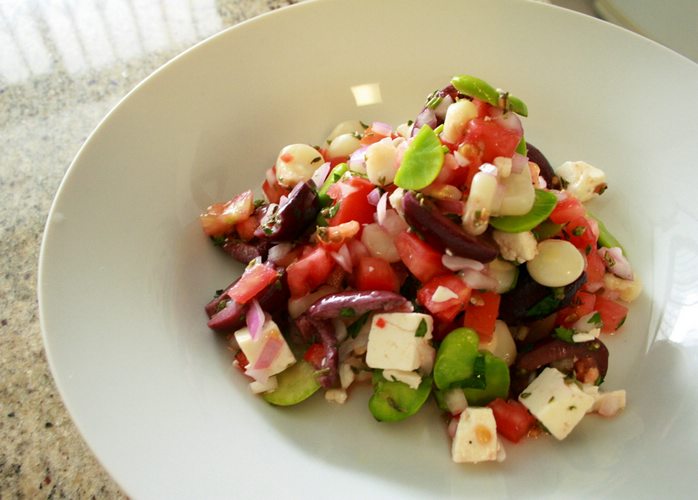 Istvan explained that solterito is not difficult to make, but it takes a long time to prepare.

After boiling the green beans and corn in separate pots, he began the lengthy process of chopping the remaining ingredients: onion, tomato, olives, cilantro and cheese.

He took care to only cut a small portion of the aji rocoto for the salad: Spice can be added, but it cannot be taken away. 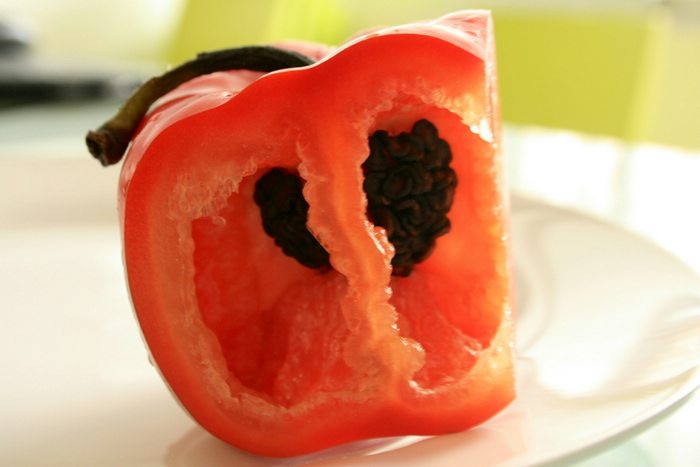 The salad got its colors when Istvan mixed all the ingredients together. He then added fresh squeezed lime juice to the vegetable mix along with some salt and pepper. 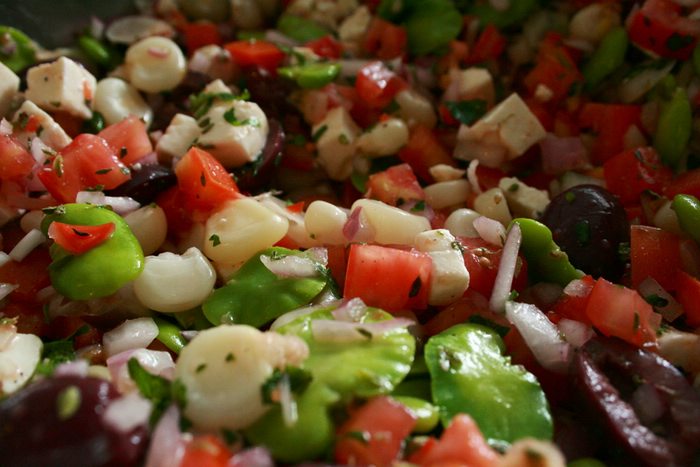 He put the salad in the fridge along the papaya juice until it was time for our team at the office to eat lunch.

Olluquito con pollo y arroz is a carb-friendly dish from Peru with plenty of potatoes and rice. 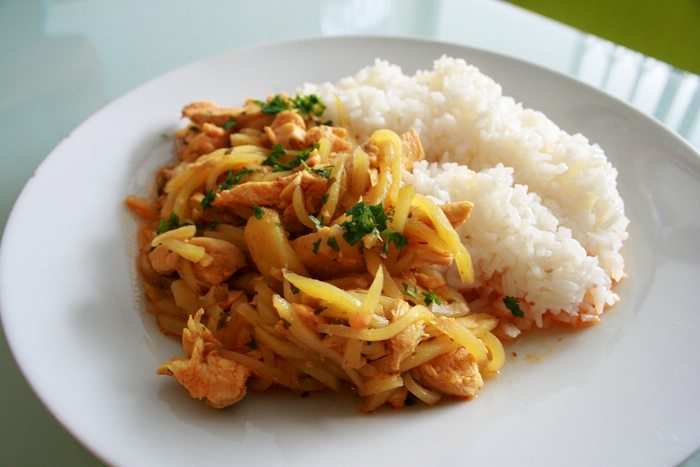 Peru is home to over 3,800 varieties of potatoes, one of which Istvan used to prepare this hearty  main course. The olluco potato is yellowish in color and has a distinct crunchy texture when it’s cooked.

Istvan bought the olluco potatoes already shredded and soaked them in water for an hour with a little bit of salt, sugar and lime juice to add flavor. 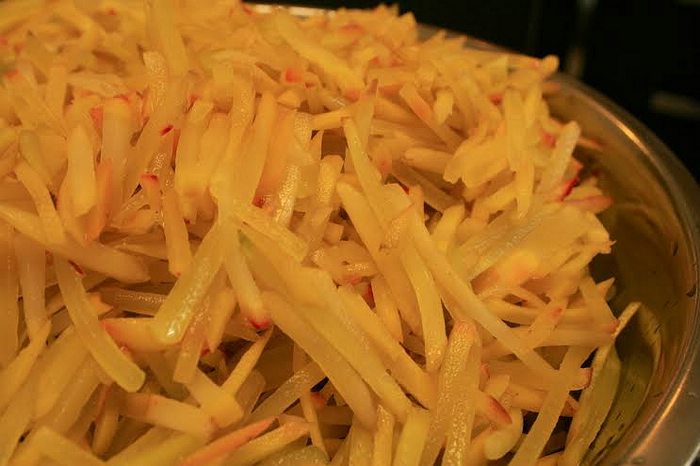 He sautéed the onions and garlic in a large pot before adding spoonfuls of aji panca and aji amarillo. Next he mixed in a medley of spices, including salt, pepper, cumin and oregano. 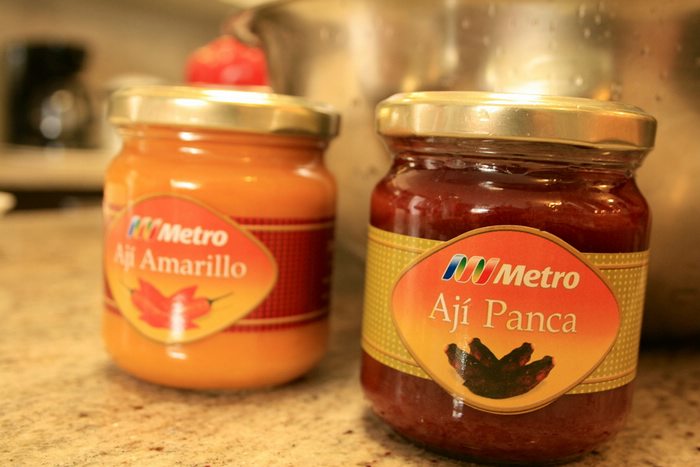 The chicken cooked slowly over a medium flame while it soaked up all the flavors. Meanwhile Istvan added the olluco potatoes to the large pot and prepared the white rice. 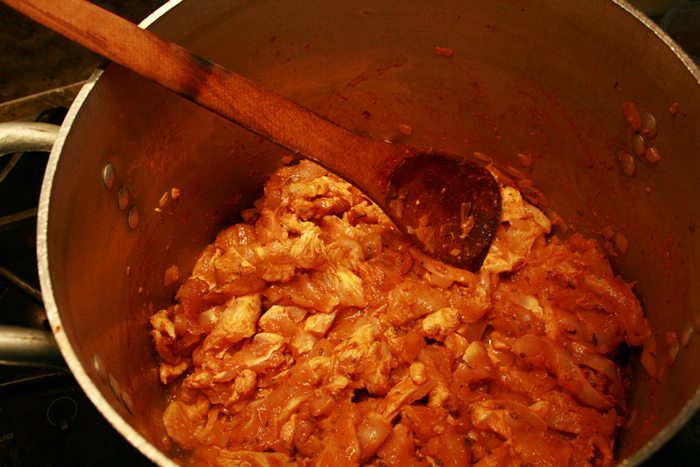 Istvan served a good portion of rice with the aji- infused chicken and potato main course. 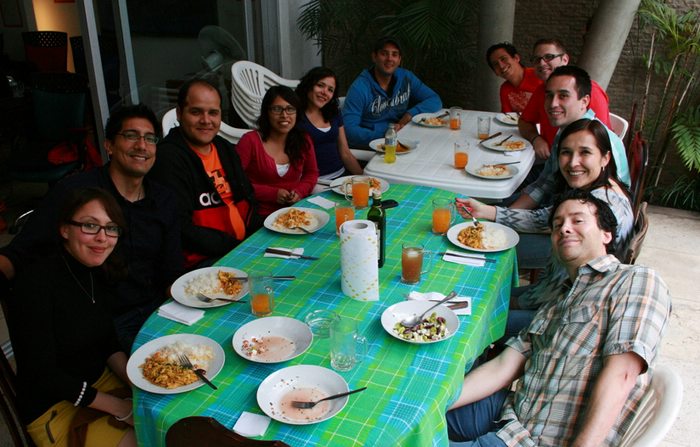 Our Peru for Less team gathered around the table to enjoy our Peruvian lunch prepared by Istvan. The delicious meal included solterito salad, olluquito con pollo y arroz for the main course, and was served with cold papaya juice.