Easter in Peru, known as Holy Week (Semana Santa), is a week-long religious celebration that features impressive vigils, processions and holy masses. It is one of, if not the, most widely celebrated holidays in the country. In Peru, like anywhere in the world, the occasion is to commemorate the resurrection of Christ. However, there is a unique old world touch that brings the spirit of the Andes into the festivities.

Here is some background knowledge to get you started:

There are select cities in Peru where the Easter celebrations are especially monumental, learn more here:

Also, plan ahead for the upcoming Semana Santa:

While you’d be hard pressed to find an easter egg hunt in Peru, there are many distinct traditions. Here are some easter traditions recognized throughout Peru:

You might be wondering what is the typical food served throughout Semana Santa and what’s on the menu for Easter dinner. Here are some traditional meals you’ll find on just about every family table during the holy week:

For anyone planning to visit Cusco and Machu Picchu during the Semana Santa celebration, it is an excellent chance to observe local traditions, food, and how Cusquenans mix Catholicism and Inca culture. The rich mixture of beliefs and traditions from the Old and New worlds is unique to Cusco.

The Lord of Earthquakes Procession

One example is Santo Lunes (Holy Monday). Other cities in Peru and around the world have Semana Santa processions, but only Cusco has the Procession of El Señor de Los Temblores (The Lord of Earthquakes). The story behind the statue of Christ in this procession is fascinating. The King of Spain supposedly sent the figure as a way of converting the local natives. It was installed in the church, where it darkened to a copper color from the smoke of many candles. During a major earthquake on May 31, 1650, locals took the statue out of the church, and the quake miraculously stopped. Ever since then, the figure has held great importance for the people of Cusco.

For more than 200 years, on Holy Monday in Cusco, the figure is dressed in beautiful clothing. It is positioned onto a platform adorned with red ñucchu flowers. Dozens of men hoist the platform onto their shoulders and solemnly parade him out of the Cusco Cathedral. They then parade around the streets of the historic center, and back to the Plaza de Armas.

For Cusco locals, the other days of Semana Santa are also important. On Domingo de Ramos (Palm Sunday), people go to church to celebrate the entrance of Jesus to Israel and to receive bouquets of rosemary and palm tree leaves. Since all the churches are open on this day, travelers can get into any of them without paying the usual tourist admission fee. (be sure to be respectful and refrain from taking pictures.)

Food is another significant aspect of Easter in Peru. It represents both a sign of gratitude and an opportunity to rejoice after a long Lenten fast. On Thursday, it is customary to taste the twelve different traditional dishes. Because of the Catholic prohibition against eating red meat during Lent, most plates feature Andean plants, grains, and vegetables abundant in the area, such as potatoes, corn, and squash. Some dishes may include fish or shrimp. And then there are a whole range of delicious desserts such as arroz con leche, mazamorra, apple and peach compotes, empanadas de semana santa, rosquitas, and many more.

Good Friday is a lot quieter than the other days as people are commemorating the death of Christ, though there are still smaller processions in the center. Also, in Cusco, people from the countryside come to the city and set up a market to sell medicinal plants, which is a tradition that stems from ancient times. On Friday, some families make a trip to Calca in the Sacred Valley to see the local procession of Santo Sepulcro involving Jesus in a coffin and the mourning Virgin Mary. The townspeople would construct flower carpets on the streets and wear black as a sign of mourning. Back in Cusco, Saturday and Sunday also tend to be quieter, and most activity revolves around church services. On these days, she recommends walking around traditional markets like San Pedro to see local products.

The first part of Holy Week is very busy and crowded in Cusco and some churches like the Cusco Cathedral close to organized tour groups on Monday. But the latter part of the week is usually quieter and a good time to explore and walk around. On Good Friday, many businesses close their doors, but tourist services, including restaurants and shops as well as discos and bars, remain open.

Ayacucho, located in the central Peruvian highlands and the capital of the Huamanga Province, is nationally recognized for celebrating the best Semana Santa festivities in the entire country. The city welcomes thousands of visitors every year to this Catholic festivity while becoming home to flower carpet exhibitions, firework displays, bull chases, and religious reenactments.

The ten days leading up to Easter Sunday illustrates Ayacucho’s transformation from a city of solemn processions to one of intensive partying.

Ayacucho’s history has always been synonymous with the Battle of Ayacucho, the last armed clash between Spanish armies and the patriots during the Peruvian War of Independence. The Patriots’ triumph in the battle helped seal Peru’s independence on December 9, 1824. Ayacucho’s proud history is not lost and observed during the week-long celebration of Semana Santa.

The festivities begin on Palm Sunday, which is characterized by two essential traditions. At noon there is a massive caravan of mules carrying dried flowers accompanied by several orchestras playing folklore music. After processing around the plaza, the palms are burned and buried during a religious ceremony. Later in the afternoon, a statue of Christ is carried on a white mule across the city, with thousands of people taking golden palms and eventually concluding at the Cathedral.

Holy Wednesday marks another symbolic celebration with the allegorical reenactment of the meeting between Christ and the Virgin Mary at the Plaza de Armas. Visitors can expect a massive reception for this emotional ceremony, so it is recommended to arrive early and find the right spot. On Good Friday, all the lights of the city are turned off for a beautiful candlelit procession of the deceased Jesus and Virgin Mary.

It is, however after Good Friday that Ayacucho turns from solemn to a celebratory mood as the city becomes an open-air market filled with crafts, food, and music. There are numerous art shows, folk dancing, concerts, sporting events, and local food contests from which to explore. Visitors can immerse themselves with the local culture. This includes drinking chicha horchata, a popular drink made of ground almonds, sesame seeds, rice, and barley. Traditionally, chewing on coca leaves has also been a significant aspect of Andean culture, for it provides a powerful stimulant.

The celebrations reach its climax with the infamous horse races featuring Peruvian Caballos de Paso and the running of bulls known locally as the jalatoro. On Saturday morning at around 11 am, a total of six bulls are released every half hour from the Alameda Bolognesi into a cordoned-off area of the city, marks the beginning of the party, and continues late into the night with dancing and orchestras being performed all around the main square.

On Easter Sunday, the religious rites begin again and culminate in an outlandish celebration of Christ’s resurrection. At 5 am, before dawn, the resurrected Christ is carried out of the cathedral atop a huge white pyramid adorned over 2,000 candles. Hundreds of people then carry the pyramid, which goes around the plaza until 7 am, amid ringing bells, and powering fireworks. A fitting end to an extraordinary week of festivities begins with tears of sorrow and ends with re-invigoration and newfound hope.

Semana Santa is the perfect reason to visit Ayacucho. Along with being blessed by its beautiful highland, the city is also famous for its colonial-style architecture and its 33 churches, one for each year of Jesus’s life.

Arequipa has always been a major tourist destination for its beautiful colonial architecture and breathtaking Colca Valley. However, the significant Easter celebrations are not in the main-square but in the nearby village of Paucarpata. Here, religious observations along with regional traditions make this event a truly unique experience.

While Arequipa follows many of Peru’s traditional Easter celebrations throughout Semana Santa. However, it is undoubtedly different on Easter Sunday, where the burning Judas’ effigy symbolizes an act of justice and punishment. This vivid act can be best seen from Yanahuara and is then followed by fireworks shows, which lightens up the entire city and draws a fitting end to the Easter celebrations.

Arequipa is one of Peru’s gastronomic capitals, and the abundant food on display during Easter pays tribute to that. People flood the streets of Arequipa during Semana Santa to indulge in dancing, delicious food, and festivities. Make sure to try some of the city’s most famous dishes such as chupe de camarones, rocoto relleno, and ocopa.

The Holy Week of 2020, according to the liturgical calendar, will be held between April 5 and April 11, 2020. In Peru, Holy Thursday and Good Friday are national holidays and celebrated on April 9th and 10th. If you are planning to travel during this time, it is best to book your trip as early as possible. This is one of the most popular time for locals to travel. As a result, flights and hotels fill up quickly. For a good reason, major cities in Peru are popular destinations during Semana Santa.

Contact us to start planning your dream Peru vacation package during Semana Santa. 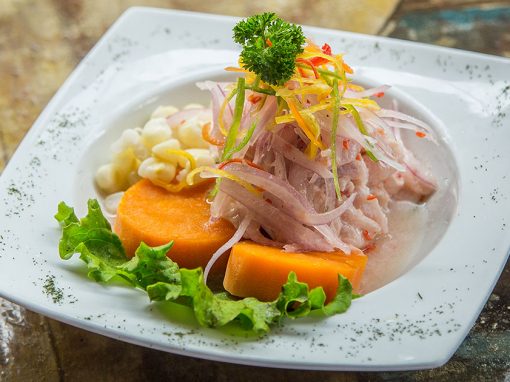